Twins turning heads around the NBA 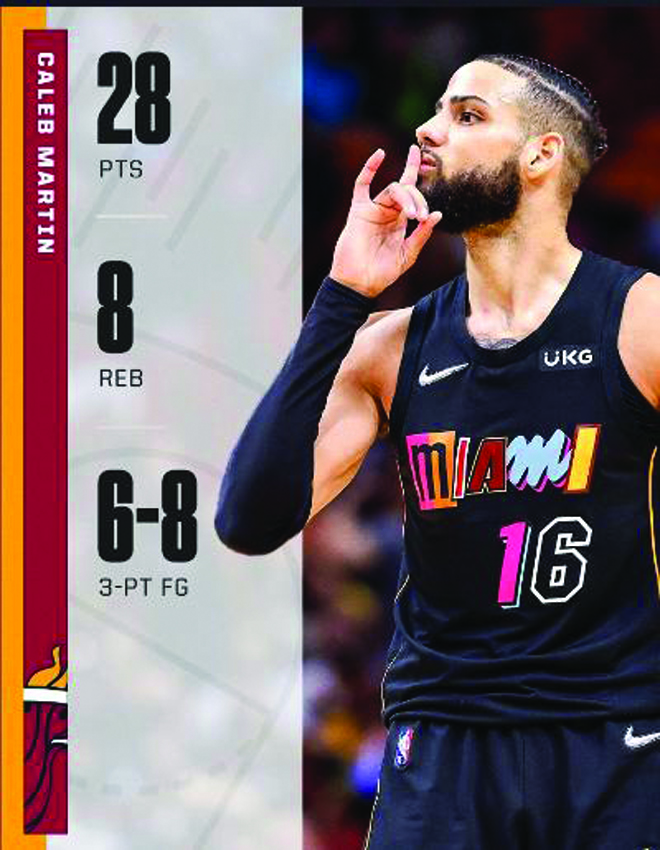 This is the kind of story that seems unbelievable.
Over his first two years in the NBA, Cody Martin of the Charlotte Hornets shot 34 of 135 from 3-point land (25 percent). This year, through the first 25 games, Cody was No. 1 in the NBA in 3-point percentage, hitting 27 of 54 for 50 percent.
Last year Cody played 18-plus minutes in 22 different games. He had five or fewer points in 12 of the 22. He’s been a lockdown defender since he entered the league, but this year his offensive improvement has been staggering. He’s averaging 27 minutes off the bench and playing like a guy who has a long future in the league. He’s averaging nine points, 4.5 rebounds, 2.5 assists, 1.3 steals, 0.6 turnovers and shooting 49 percent on field goals and 73 percent from the free-throw line.
Cody was terrific in Charlotte’s 130-127 win over Atlanta on Dec. 5. He had 19 career-high points, six rebounds and two steals as the Hornets improved to 14-11.
“He impacts winning at a high level,” Charlotte coach James Borrego said. “He has winning DNA oozing out of his pores. He just makes winning plays, big shots, cuts, rebounds, defensive stops. He’s a winner, plain and simple. He belongs here and he is a major part of what we are trying to do here with this group.”
•••
That’s only half of it. Twin brother Caleb Martin of the Miami Heat had his peers oohing and aahing on social media following the Heat’s game against Milwaukee on Dec. 8.
Let’s set the stage. The Bucks were red hot while winning 10 of 11 games. Miami was missing its two best players (Jimmy Butler and Bam Adebayo). On top of that, Miami was coming off 15- and 26-point losses.
Caleb jumped into the starting lineup and (gulp) scored 28 team-high points as the Heat (15-11) beat the Bucks 113-104. Caleb was completely unconscious, hitting 9 of 12 field goals and 6 of 8 3-pointers, going 4 of 4 at the line and adding eight rebounds, three assists and two blocks in 33 minutes.
“They put me in the starting lineup because they believe in me,” Caleb said. “When my opportunity comes, I want to take advantage.”
Caleb was playing well before that outburst, averaging 12 points in his previous five games. How about that for a guy on a two-way contract. (The contract allows Caleb to be active for 50 of the Heat’s 82 games.)
Said teammate Max Strus after the win over the Bucks (16-10): “Caleb played out of his mind tonight. How can you not like Caleb Martin? He’s always locked in and plays extremely hard.”
Said teammate Kyle Lowry: “If he didn’t play that first half, we would have been blown out. His confidence is growing. He’s playing for a job, playing for a contract, playing to prove he belongs. A guy like him is working his butt off to prove he should be on a regular contract.”
Said coach Erik Spoelstra: “As a head coach, I just really enjoy watching him work every day, watching his approach to this and watching him compete. The guys love playing with him. He inspires everybody with his crazy efforts and his competitiveness. He’s our kind of guy.”