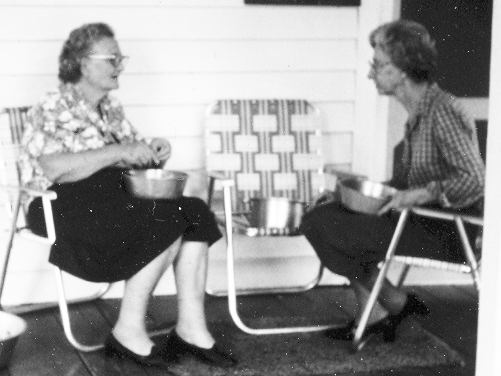 Maybe Father Does Know Best
By Julie Terry Cartner
It was mid-December, and the high school chorus had been practicing for months. With such a talented group of kids, the chorus teacher, Mr. Williams, had decided they could handle the “Hallelujah Chorus,” probably the best-known segment of Handel’s Messiah. Chorus, on an austerity budget, meant practices happened at lunch time. Teens had to be devoted to give up their lunch time socialization to report to the auditorium to learn the intricate work, but devoted they were, and that’s what they did.
For months the high schoolers scarfed down their paper sack lunches in record time, then spent the next forty-five minutes learning, practicing, and finally, perfecting the music. The choral director, also willing to give up his lunch, arranged and organized, taught and encouraged the group of teens until their voices blended in perfect harmony. Non-musicians might not understand how important balance was, but for the best effect, there needed to be the right number of each group, sopranos, altos, tenors and basses, not to mention the divisions in each group. Nobody wanted to upset the balance or harmony, so everyone committed to being present for the performance.
Two days before the concert, my sister got sick. Despite her illness, she was determined she would get better, and she would sing. The concert was a one-time performance, and she would be there. No way would she miss it. Besides, Mr. Williams and the rest of the group were counting on her. Mom understood. Dad, not so much.
Despite my parents’ misgivings, especially my dad’s, when her fever broke the day of the concert, my sister convinced them she was fine. She dressed carefully and we left for the concert. Since I was in a younger group, my chorus sang first, then we were dismissed to go into the auditorium to listen to the older kids. As usual, all the seats were full, so my dad met me at the back of the room, and we leaned against the wall to listen to the high schoolers.
The performance went well. The high school chorus sang all their opening numbers flawlessly, and everyone was enjoying the concert. Finally, it was time for the culmination of all that practice. Silence enshrouded the auditorium, then the opening notes of the “Hallelujah Chorus” began. The voices, swelling into the deep and powerful ranges of the timeless hymn, echoed through the crowd. I was silently mouthing the words, wishing I were up there too, when suddenly, my dad left my side and started running down the aisle. “Dad!” I whisper-yelled, but he ignored me and continued running, leaping onto the stage as the powerful notes continued. Horrified, I watched, wondering what in the world had happened to my dad. He was a behind the scenes kind of guy. He wasn’t a person who looked for attention, and yet there he was, center stage.
That’s when I saw what was going on. My sister, after running a fever for two days, after pushing herself to hit those unbearably high notes near the culmination of the song, had passed out. The girls surrounding her were trying to hold her up and continue singing. Dad, who apparently hadn’t taken his eyes off her throughout the performance, jumped onto the stage, and caught her before she hit the floor. Gathering her up in his arms, he quickly exited, stage left, and got her out in the hallway as the music swelled and ended, one last perfect note echoing across the rapt audience.
Later we learned how few people were even aware of what happened. The power of the music, the composure of the singers, and the quick action of my dad resulted in a barely noticeable moment of drama. Only the girls right around her were affected, and they never stopped singing. At the end, the choral group got a standing ovation, as is traditionally appropriate for the “Hallelujah Chorus.” As my sister sat in embarrassment in the hallway, Dad’s response was typical: “Next time, listen to your father and stay home.”

Sisters
By Marie Craig
In 1983, I enjoyed a vacation away from my teenage sons and husband to drive from Columbia, S.C. to Black Mountain, N.C. to visit my mother. During that time, she and I drove down here to Sheffield, Davie County, to spend a few days with her sister, Mae. This was the community where they had been raised, and I always enjoyed being here to visit with relatives and learn more about my family.
Both women were talented gardeners, cooks, and storytellers. One of these warm afternoons as I was getting something out of the car, I looked back at Mae’s farmhouse. The sisters were sitting on the porch shelling peas from Mae’s big garden. They were heavily involved in a conversation that probably started with, “Do you remember…” It was a Kodak moment, and I grabbed my camera to document that.
I saw a small paper bag once that had held snapshots from the drugstore with the caption, “Time marches on until the camera commands HALT.” This was one of those moments as I took this candid shot that I have since digitized and shared with cousins.
Even though that click of the camera happened 38 years ago, I still remember everything about that split second. The Chinaberry tree where I had played with Mae’s children; the wonderful meals I shared on the many visits we had there; the walks down to the creek to go wading; the funeral for a dead bird we found; and the walk up to the Methodist Church on Sundays or to Wade Smith’s store for candy.
But this is about me. How about you? What special old photographs do you have that you need to describe to your family that bring back such happy memories? Even better, write about them. You will find that long-buried experiences will come back to you and that thanksgiving for happy family times will bless your life.
You can share these on social media, emails, reprints, or by writing a book. A free site for sharing family photos and words on the Internet is at www.familysearch.org/memories/.

Holidays Past and Present
By Gaye Hoots
This is the first year I remember not eating the Thanksgiving meal with family. I visited before the holiday but missed eating either lunch or supper as a family. My family changed over the years. The first meals were at my maternal grandparents in Pinnacle, where cousins our age had a grand gathering. Looking back, I don’t know how Grandma managed with a small country kitchen, even with the family’s help. Food prepared from scratch and raised on their farm tasted better. We kids had no worries, and though we worked on the farm, we were not aware of the responsibilities or burdens our parents carried.
I married young and close to home so that we had a meal with each family on the holidays and my kids had cousins to play with as they grew up. We still went to my grandparents on Christmas. Grandma continued the tradition after Grandpa died and lived to be ninety-nine years old.
When I divorced and began a career as a nurse, my family accommodated my schedule when possible, and if I worked during lunch, I ate supper with them. When I remarried, my stepchildren lived with us, and were included. My grandfathers were gone, and the grandmothers could no longer entertain, but the visits continued when possible. I worked full time and went to school to further my degree, so it is a blur.
We had holiday meals at my parents for as long as possible and then at my sister Faye’s. She learned to cook from Mama and could match her skills. When she could no longer cook, and I moved back to Advance, I had them for a few years. COVID changed the plans for the last year, but Brad and Annie have started to do the holiday meals, which is a blessing. Our families have evolved, and many who have been stepparents continue to be family.
We continue to include new families and to lose some members, but that nucleus of at least three generations remains. I am now the oldest member of our family, although I have older cousins. There are six generations in my memories, and if I am as lucky as my mother and her mother, I will live to see another generation started.
With each year, the value of my family, friends, and schoolmates increases. The importance of material things decreases, although I value the ability of the younger generations to strive to provide for their children so they can build solid lives and prosper. I see these thoughts reflected in those of my age by family and friends. One of the most important is the ability to recognize and appreciate all we have. We learn to enjoy waking up each day with the gift of a new day to spend as we choose. A good cup of coffee, a sunny day, a beautiful view, the call or touch of a loved one, sharing the joys of our family and friends, a good book, a kind act, and the list is endless.
There is also a list of people and things we lose as we age. The saddest thing is that we watch generation after generation chase wealth, go to war, mistreat the poor, and repeat this without ever seeming to value their fellow man or learn from it. The biblical version of Cain and Able appears to repeat itself over and again. We bury our dead and grieve their loss, we feed and support our living, we attempt to comfort those who mourn, and we watch and love each generation as they do the same.

Submit a favorite memory of life in Davie County. Story should be typed and not more than 250 words. Please include your name and phone number or email address. RWG retains reprint rights. Email to lhb1@yadtel.net.