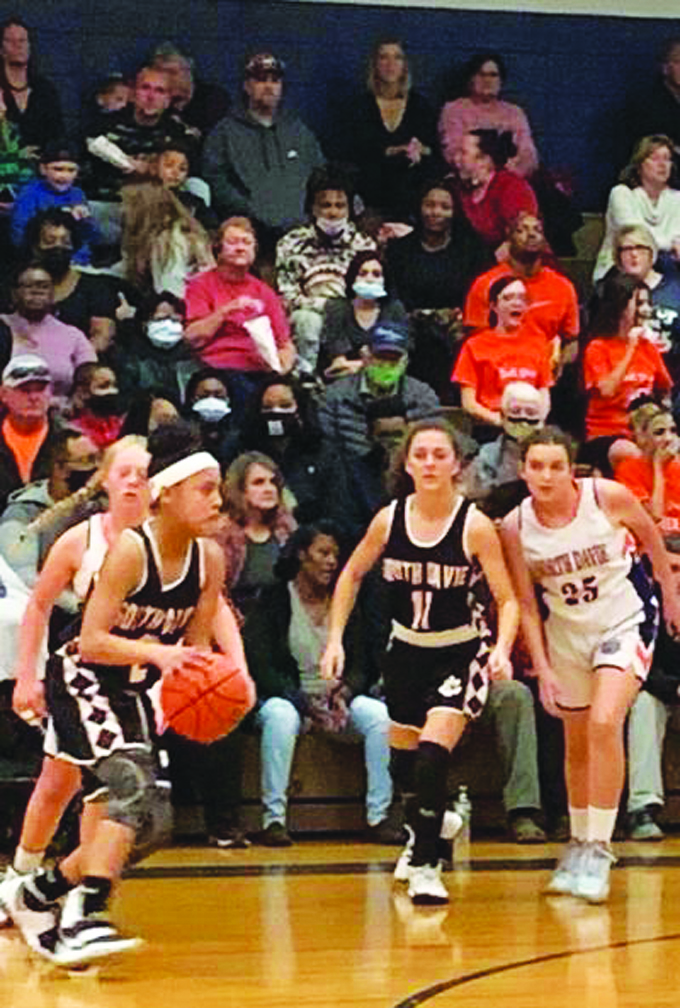 Makenzie Gentry and Emmy Johnson combined for 19 first-quarter points as South Davie’s girls basketball team raced to a 23-3 lead in the first seven minutes.
The rest of the game was a formality as South pounded host North Davie 50-17 on Nov. 30.
Gentry was out of town and did not play in the season opener, a 34-30 loss to Summit. She scored 18 in her season debut, followed closely by Johnson (16) as the Tigers pushed their winning streak over North to 19 games.
Ari Warren and Raney Phelps had four points each. Scarlett Brock, America Stockton, Joyah Abrams and Londyn McDowell had two apiece.
“Makenzie and Emmy played really good,” coach Brandon Gentry said. “I’m proud of the effort. We finally got our press down.”
Avarie Martin had 13 points in defeat. Maddie Ratledge had the other four for North.
Ellis 41, Canterbury 26
Emmie Burris and Bailey Aderhold lit up Canterbury on Nov. 30, outscoring the home team by themselves as the Jaguars rolled to their second victory.
It was close after the first quarter (10-8 Ellis), but the Jaguars gained separation in the second quarter.
Burris bombed in four 3-pointers to finish with 14 points. Aderhold added 13.
“Emmie had numerous steals and two assists,” coach Susan Jones said. “She’s a beast. She’s small in stature but strong and can really ball.
“Bailey had a tremendous presence on both ends of the court.”
Stella Frye, Kayden Richardson, Kate Nicholson, Britany Hernandez and Olivia Smith did their jobs. Frye has quickly become a defensive star. “Our offense was spurred on again by aggressive defense led by Stella, who continued to frustrate opposing team’s guards with her quiet tenacity and fast feet,” Jones said.
“Kayden and Kate played strong as they had to battle down low against two 6-footers, and both still ended up with double-digit rebounds.
“Every player who gave minutes brought something positive to the floor, including Britany with a hustle play that resulted in a steal and Olivia, who had a 3-pointer just before the end of the half (to push the lead to 25-13).”
Frye and Smith had five points each. Madison Daugherty and Richardson had two.
North Davie (0-3) lost at Canterbury.