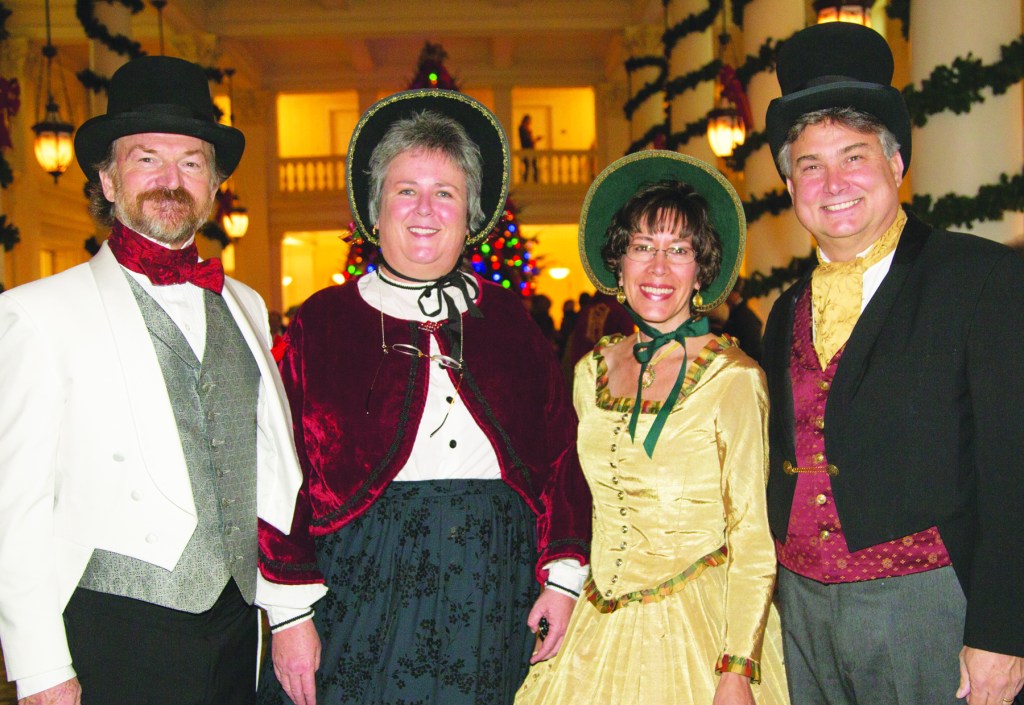 What better way to enjoy the Christmas season than to hear well-known songs performed by talented musicians and vocalists?
The community is invited to a free concert at the Brock Performing Arts Center on Saturday, Dec. 11 at 7 p.m.
“This year’s concert will include the astounding talents of Carolers of Christmas Past and Giannini Brass,” said Sidniee Suggs, arts council director.
Carolers of Christmas Past got their start at the Brock in 2001. From that time, they have been invited to sing not only at the United States’ White House but North Carolina’s governor’s mansion and events in Virginia and South Carolina.
It is nothing unusual for them to do 45 appearances in one holiday season. One of their favorites is to perform at the Dickens Festival in Roanoke, Va.
Their Victorian-period costumes always draw attention and make the group more memorable to the audiences as they sing such songs as “I Wander as I Wander,” and “The Coventry Carol,” but also some modern holiday songs such as “Frosty the Snowman.”
Carolers of Christmas Past include:
• Nate Pendley, tenor, loves to sing, act, and entertain. He has performed in numerous theatrical productions in Davie and beyond.
• Jennifer Jordan, soprano, has been singing since childhood, is also the quartet’s costumer and handles bookings.
• Lisa Ramsey, alto, holds a music degree from William and Mary, is the quartet’s musical director and has arranged many of their selections.
• Dennis Ramsey, baritone, holds a music degree from William and Mary and enjoys the chance to sing with his wife.
Many of those who attend the concert will recognize the musicians in Giannini Brass. They have performed at the Brock in the past and are members of area orchestras. Their use of all brass instruments makes well-known Christmas melodies vibrant.
The group was formed in 1989 and named after the founder of the N.C. School of the Arts, composer and educator Vittorio Giannini. Members perform in nearly all of the professional orchestras in the Carolinas, and have toured and performed with orchestras and chamber music ensembles throughout the United States and Europe.
The ensemble has performed in a variety of unusual and interesting performance settings, including multi-media planetarium concerts, with symphony orchestras, and on radio and television.
For several years the Giannini Brass was the brass ensemble-in-residence for the UNC School of the Arts Musica Piccola summer music program. From 1999 to 2001 the Giannini Brass were radio artists-in-residence on Classical 89.9 WDAV, the classical music radio station for Charlotte.
The following are the members of Giannini Brass who will be performing at the Brock on Dec. 11.
• Anite Cirba is principal trumpet of the Winston-Salem Symphony, Greensboro Symphony Orchestra, Carolina Chamber Symphony, and Co Principal Trumpet with The Arizona Music Festival. She graduated from the N.C. School of the Arts with a bachelor’s of music degree and earned her master’s degree from the Cleveland Institute of Music. While a graduate student, she played with the Cleveland Orchestra in Severance Hall and on tour at Carnegie Hall.
• Chris Ferguson is principal trombone with the Salisbury Symphony. He has held positions with the Long Bay Symphony in Myrtle Beach, S.C. and the Disneyland All-American College Band, CA. A versatile player, he has performed with organizations including touring Broadway productions, symphony orchestras, big bands and the rodeo.
• Joseph Mount, horn, performs with numerous orchestras and chamber music ensembles. He is a member of the Winston-Salem and Greensboro symphonies and the Carolina Chamber Symphony, and has performed with the N.C. Symphony, Charlotte Symphony and Charleston Symphony. He holds degrees from the Cincinnati College-Conservatory of Music and from the University of North Carolina School of the Arts.
• Matt Ransom has been principal tuba with the Winston-Salem Symphony since 1994. He has performed with numerous orchestras across the southeast including the N.C. Symphony, Charlotte Symphony, Greensboro Symphony, Augusta Symphony, Charleston Symphony, Carolina Chamber Symphony and the Long Bay Symphony. He has also performed in Italy, France, Holland, Germany, Austria, Belgium and Switzerland as tubist with the N.C. School of the Arts International Music Program Orchestra. He is on the faculty of Wake Forest University and Shaw University as instructor of tuba and euphonium, and is the artist-faculty tuba instructor at the N.C. School of the Arts. He earned his bachelor’s of music and arts diploma from the N.C. School of the Arts. He spends summers teaching tuba and euphonium at the New England Music Camp in Sidney, Maine.
• Trumpeter Kenneth Wilmot is a founding member of the Giannini Brass. He is a member of the trumpet sections of the Winston-Salem and Greensboro symphonies, and has also performed with the New World Symphony and with the Eastern Music Festival. As a jazz artist, he has appeared and toured with popular and jazz artists such as The Four Tops, Ray Charles, the Tommy Dorsey Orchestra, the Glenn Miller Orchestra, and the Guy Lombardo Orchestra. Ken earned his bachelor’s of music and master of music degrees from the N.C. School of the Arts as a student of Ray Mase.
For those attending this sixth annual “Christmas Celebration at the Brock,” remember it is first-come seating. Doors open at 6 p.m. but the theatre will not open until 6:30 due to performance preparations. There will be an intermission. No beverages will be served nor allowed in the theatre, including water. Handicap seating will be done before the general audience is seated.
For more information, call the box office (Monday-Friday from noon-5 p.m.) at 336-751-3000.