Hire gets crucial wrestling pin in make or break situation 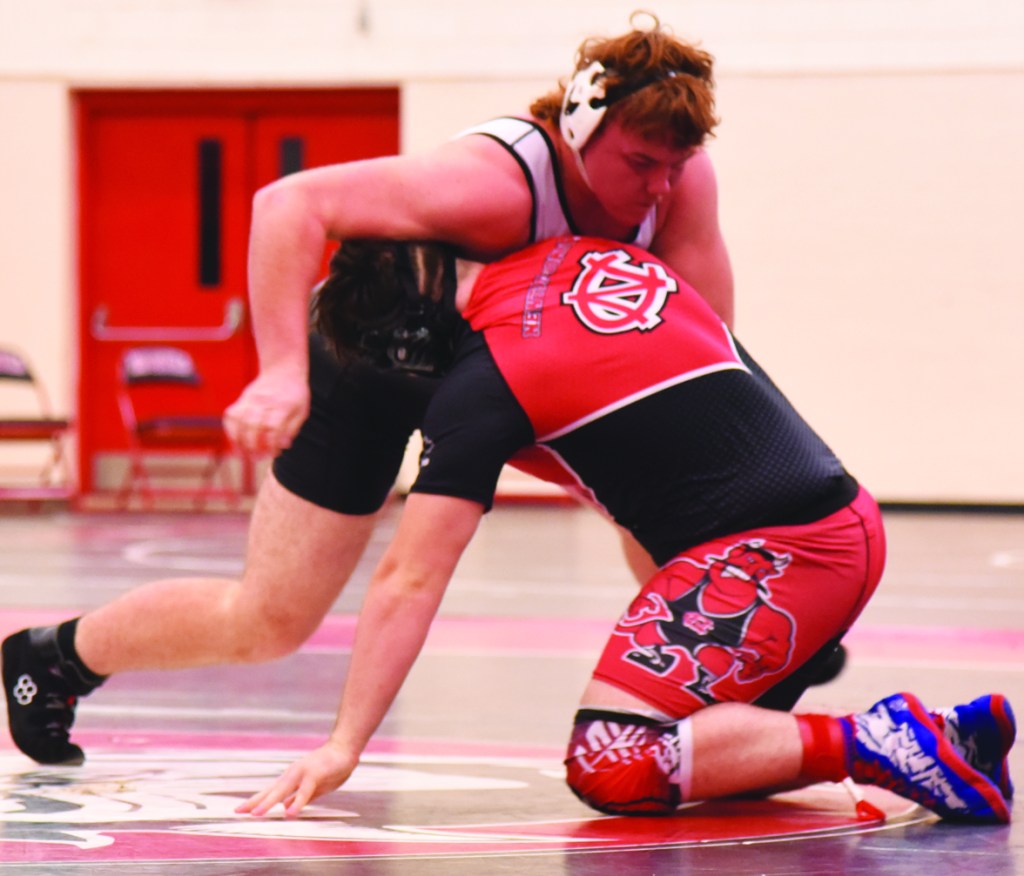 The Davie wrestling team has come to expect big wins and dominance from Lane Hill, Collin Bailey, Isaac Webb, Jack Jarvis and Hunter Testa.
Bailey (109 career wins), Jarvis (105), Webb (104) and Hill (79) have combined for 397 career victories, and sophomore Testa has won 33 of 37 matches in two seasons.
But clutch wins from Brysen Godbey, Alex Tarbet and Lawson Hire turned potential defeat into spirited 42-33 victory in a showdown at Newton-Conover. Heroic moments are relatively new for that trio. Godbey is a sophomore who split 20 matches last year, when he had the always difficult task of wrestling at 220 and heavyweight as a freshman. Hire only got three varsity matches last year as a sophomore. And Tarbet is a freshman who didn’t have a true eighth-grade, middle-school season because of COVID.
A four-team meet was hosted by Newton-Conover on Nov. 22. It was the first dual team matches of the year for the War Eagles, who went 3-0 with two easy wins and one dogfight triumph.
“It was a good battle for us,” coach Perry Long said of the match against N-C in which Davie claimed eight weight classes and dropped six. “We needed that test. Their coach said they needed it, too. He said out of 26 years he’s only beaten Davie twice. He said win or lose it was good for us. We needed to be battle-tested right there, too.”
Davie’s matches against Freedom and South Caldwell played out as scripted. Davie buried Freedom 59-12 while getting pins from Webb (160) and Vance Visser (195); major decisions from Hill (132) and Bailey (152); and a 4-3 decision from Tarbet (106). Davie’s other six wins were forfeits.
After squeaking past N-C, the War Eagles crushed South Caldwell 72-12. The onslaught included nine pins from Tarbet, Hire, Reid Nail (138), Sam Collins (145), Bailey, Webb, Jarvis, Testa (182) and Ryder Strickland (285). The Spartans handed over three forfeits.
Davie 42, N-C 33
The middle match, though, wasn’t easy. Hill pinned at 132, but the Red Devils took three of the first four matches to carve out a 15-6 lead.
But the meat of Davie’s lineup went to work at 152 as Bailey decisioned, Webb pinned, Jarvis decisioned and Testa pinned. That charge produced a 24-15 Davie lead.
Jarvis is a senior who hasn’t lost since his sophomore year. He generally wins by more than a three-point decision, but this opponent “stalled,” Long said. “(The wrestler from N-C) did his job. He balled up so Jack wouldn’t pin him. They had to have him do that.”
A Newton-Conover pin at 195 and a N-C lead in the 220 match continued the drama. Godbey (220) seemed on the brink of losing as he trailed 7-3 in the third period. But Godbey pulled off a dramatic comeback and pinned just before the clock hit zeroes. That was a pivotal moment. Instead of the teams being tied at 24, Davie had a 30-21 lead.
“The Newton-Conover kid called timeout,” Long said. “I said: ‘Godbey, you’ve got 27 seconds. You’re down. Dig an under hook here. Try to put a body lock on him. If he fights the body lock, go to double arms and try to throw the crap out of him.’ Hey, he did everything I told him. He threw the kid and pinned him with three seconds left. That was a nine-point swing. That was big for us because they thought they were going to win that match.”
After the Red Devils got a pin at heavyweight to shave Davie’s lead to 30-27, the pressure was on Tarbet at 106. The freshman delivered a pin.
“It looked like Alex was wrestling his twin,” Long said with a laugh. “I swear they looked just alike. Both of their names are Alex. The good thing about it, our Alex was better than their Alex. That was big for us.”
After Newton-Conover got a forfeit at 113 to make it 36-33, everything boiled down to the final weight class at 120. If Hire loses a decision, the score is 36-36 and the hosts win on criteria. The Red Devil made Hire sweat – it was 0-0 after the first period – but Hire came through with a second-period reversal that led to a pin.
“He had to win,” Long said. “The only choice they had was to bump their 113 up to wrestle Lawson because Lawson beat their 126 in the tournament at Hough. When Lawson went down to 120, they didn’t have much choice. Their kid was real athletic, but Lawson is tough.”
For the season, Bailey and Jarvis are both 6-0. Hill is 6-1. Testa and Godbey are 5-1. Hire is 5-2, Collins 5-3 and Visser 4-2. Tarbet and Webb are 3-0.