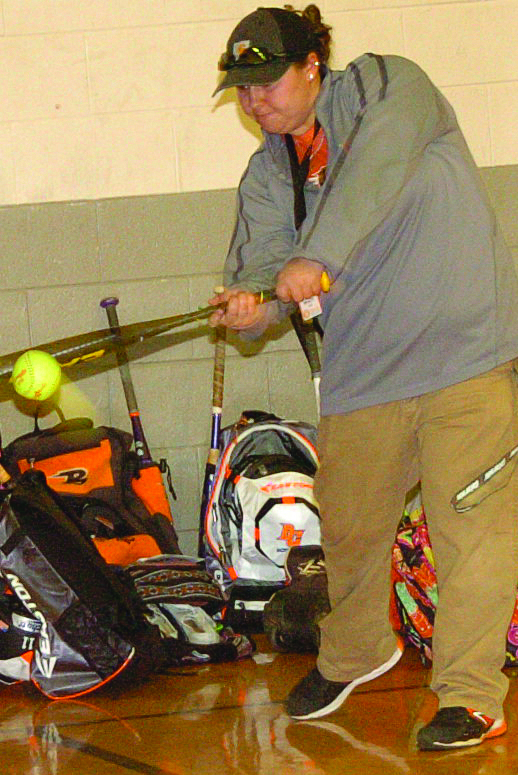 Morgan Wyatt grew up in Mocksville, ranks as one of the top hitters in Davie softball history and coached at Davie for the past seven years, including two years as varsity softball head coach.
She looked like a Davie lifer. Suddenly, she’s a former Davie coach.
Wyatt, 29, has accepted an assistant coaching job in softball at Lees-McRae College in Banner Elk. Her last day as a South Davie PE teacher will be Jan. 3.
The Bobcats’ coach is Kendall Fuller, who was a graduate assistant at Western Carolina when Wyatt played for the Catamounts.
“We had been talking back and forth,” Wyatt said. “It’s an opportunity for me to try to keep moving up. I think any collegiate athlete at some point in time dreams of trying to get into coaching at that level.
“There was a position that opened up and it kind of fell in my lap.”
Fuller had 10 years of experience as an assistant coach – at Western Carolina and then Winthrop – before getting hired at Lees-McRae in the summer of 2020.
“She was one of my grad assistant coaches,” Wyatt said. “She’s a down-to-earth person. She knows her stuff. When she was coaching at Winthrop and I was more on the travel ball scene going to tournaments, we always stayed in touch and would meet up if we went to homecoming at Western.”
Wyatt had a historic career at Davie from 2007-10. She hit a then-record .542 in 2009, the same year she slammed a then-record nine home runs. In career rankings, she’s second in homers (13) and third in hits (129), RBIs (91) and doubles (26). She remains the only War Eagle to blast three homers in one game.
She was a catcher at Western for two years. She was hitting grand slams as a freshman, when she led the team in homers (five) and RBIs (29).
After graduating from Western, she returned home to begin a teaching/coaching career. She was the Davie JV softball coach and varsity assistant under Dawn Lowery for five years (2015-19). Lowery stepped down after the 2019 season and Wyatt took over. Last spring, in Wyatt’s second year at the helm, the War Eagles went 10-6, tied for the second in the Central Piedmont Conference and reached the second round of the 4-A playoffs.
That followed an abbreviated 0-7 season in 2020, when the coronavirus stopped all sports in the middle of March. After going from zero wins to 10, the War Eagles are poised to spring upward even more next spring.
“What makes it hard is the group of girls at the high school right now is a really good group,” she said. “I loved coaching there, but I have faith that the girls are going to be fine. I think they’re definitely in the running for a conference championship this year.
“I talked to all the girls. They had mixed emotions, but they understand. I tell them to work hard and follow their dreams and that kind of thing. They knew this is something I wanted to do, so they’re supportive.”
Coaching will be a full-time job for Wyatt, who is going to try to help the Bobcats turn things around. They’ve had one winning season in 12 years (22-19 in 2019).
“The timing wasn’t what I thought it would be, but it usually works that way,” she said. “It just happens when it’s supposed to. I’m excited to be able to hop in and help and keep elevating them to where they need to be.
“It wasn’t in the plans at all, but I didn’t want to look back and have any regrets on not trying to better myself and follow my dream.”

Asheville blitzes Davie in Round 1