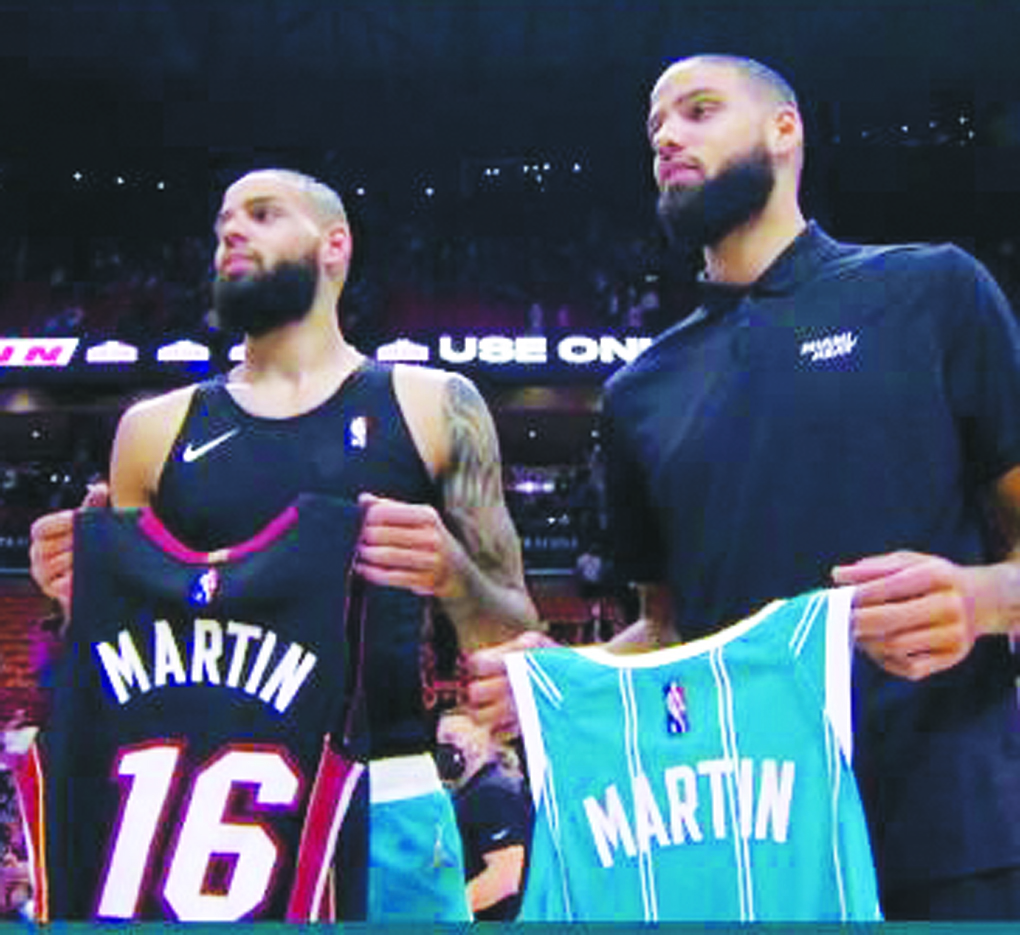 Cody (left) and Caleb have some fun before Oct. 29 game.

Cody and Caleb Martin were inseparable. The identical twins played on the same football, basketball and baseball teams growing up. They played basketball together at the Brock Gym, at South Davie Middle, at Davie High, at Oak Hill Academy, at N.C. State, at Nevada and for two years in the NBA for the Charlotte Hornets.
But they’re teammates no longer.
The Hornets waived Caleb in August. He did land on his feet before the season, though, signing a two-way contract with the Miami Heat, which happens to be one of Charlotte’s division rivals.
“It was kind of like: ‘Damn, today’s the day,’” Caleb said. “Our time ran out. Obviously, it stung for a little while, the fact that I got waived.
“But at the end of the day, Charlotte gave me my opportunity coming in as an undrafted free agent and allowed me to play in my home state with my twin brother for two years. So I’m definitely grateful for that opportunity and those experiences.”
As a two-way player, Caleb will be on the Heat’s active roster for 50 of the season’s 82 games. In the other 32 games, he will play for the G-League’s Sioux Falls Skyforce.
“Even though I’m a two-way, my goal is to come in and make an impact right away,” Caleb said. “Bring a different type of intensity and spark off the bench.
“Obviously it’s been a little bit different (without playing on the same team as Cody). But I think it’s been a lot smoother than I kind of anticipated. It wasn’t like I was upset. It’s just the beginning of something different.”
Charlotte played at Miami in a preseason game in October, making them opponents for the first time ever – with one exception.
“It’s been years,” Caleb said. “I think the only time that we really got a chance to do that was the NBA Top 100 camp my junior year of high school. I think that’s really the only time we played against each other in an organized setting. It was a little weird at first.”
Miami won the preseason game 104-103. Cody got 29 minutes for Charlotte, scoring 15 points to go with five rebounds, three assists and three steals. He made 6 of 9 shots, including 3 of 4 from 3-point range. Caleb saw action for 15 minutes and had three points, three rebounds and two assists.
Both players started. Caleb got the nod with Jimmy Butler out sick.
“As soon as we did the walkthrough, everybody was saying, before I even got to the matchup: ‘All right, you got your brother,’” Heat coach Erik Spoelstra said. “Those were cool moments.”
Cody said: “It’s kind of crazy because it’s the first time we’ve ever been in an organized sport playing against each other.”
Caleb: “(It was) a moment of realization for (family), too, that they’re going to have to be 50-50 now.”
The Heat and Hornets met in a regular-season game Oct. 29, with host Miami winning 114-99. Cody was efficient in 29 minutes, scoring 15 points on 4-of-8 shooting from the floor and 5 of 6 free throws. He added three boards and two assists. Caleb, however, did not see the floor.
Cody has gotten off to a great start as a reserve. Through nine games, he was averaging 24.7 minutes, 8.7 points, 4.7 rebounds, 2.3 assists and 1.2 steals. He was shooting 47 percent from the floor and 78 percent from the free-thrown line. He had attempted 17 3s and made eight.
Meanwhile, Caleb appeared in five of the Heat’s first eight games. In those games, he averaged 12 minutes, 4 points and 2.2 rebounds.
Through Nov. 4, the Heat was 6-2 and in first place in the Southeast Division. The Hornets were 5-4 and in third place.