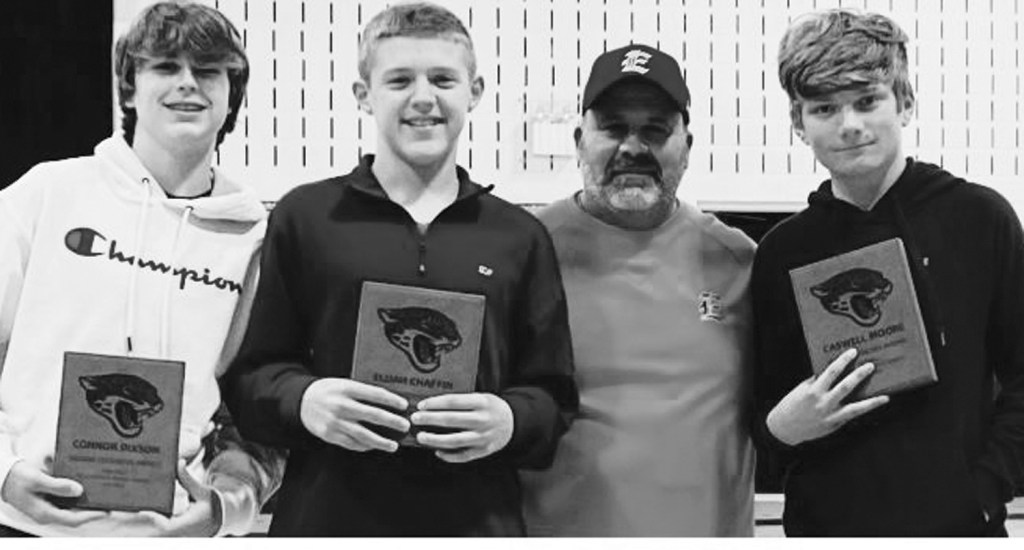 After winning four games the past three seasons combined, the Ellis football team exorcised quite a few demons in 2021. The Jaguars completed a perfect season at North Davie on Oct. 27, and the star was a seventh grader named Braxton Bowling.
Although Ellis finished 8-0, it found itself in a white-knuckle battle against the Wildcats, who trailed by two in the fourth quarter before falling 16-6.
“That was a tough game,” Ellis assistant coach Kendall Chaffin said. “I give it to the coaches for North Davie. They had a good game plan for us. They had nine in the box (on defense). At the end of the day, we had a few more athletes than them.”
“It was a heck of a ballgame,” North coach Timmy Allen said. “We played our hearts out. We played as hard as we could have played.”
The teams met in the season opener Sept. 2. Ellis dominated time of possession and had little trouble winning 14-0. This one, though, was not decided until late.
“The first time we played them, we had a hard time slowing them down at all,” Allen said. “We made a few adjustments with our defense since that game. We had different personnel in there. I think this time we had the right guys in the right positions. We knew what they were going to try to do.”
On the game’s first series, on fourth down, a Jaguar snapped a 30-yard run off the edge. North’s Gavin Reese electrified his team by stripping the runner from behind. North recovered the fumble at the North 10.
“I thought Reese played good for North – really good,” Chaffin said of a guy who played receiver, running back, quarterback and outside linebacker.
“He’s a good ballplayer,” Allen said. “I hope he sticks with it.”
But before the first half ended, Ellis did finish a drive, with quarterback Ethan Driver running it in. Ellis converted the 2-point play to take an 8-0 lead into the break.
The Wildcats needed an answer and they got one with a big pass play, Brady Marshall connecting with Blake French for a 65-yard touchdown.
“It was a great throw and Blake ran about 25 yards after he caught it,” Allen said. “I thought he was going to get tackled near the goal line, but he ran through a tackle at the end.”
With North down by two, a critical two-point try was next. Marshall called his own number and tried the middle. He was denied as the score stayed 8-6.
“I thought he got in, but we were about a foot short,” Allen said. “Brady couldn’t find a seam, so he tried to muscle it in.”
Credit Elliott Gould, linebackers Connor Dixson and Elijah Chaffin and the defensive front for stopping Marshall.
“Elliott went man-to-man with Reese and Brady wasn’t able to pitch it,” Chaffin said. “He took it back inside and we stopped him. That was one of the biggest plays of the game.”
North still had a chance to steal the game in the fourth quarter. But Ellis could smell perfection after a heroic play by Bowling. The outside linebacker intercepted a pass and returned it 55 yards for a touchdown. A two-point run by Dixson sealed the deal, giving Ellis a two-score lead.
“Braxton caught the ball in stride,” Chaffin said. “That was a spectacular play.”
Bowling had an incredible game. He intercepted two passes (Max Cornatzer had a third pick for Ellis.) He also rushed for 100-plus yards. Interestingly enough, he’s the younger brother of Caleb Bowling, a freshman football player at Drake.
“Braxton ran the ball extremely well,” Chaffin said. “I thought he played the best on our team.”
“That No. 4 (Bowling) is as good of a player as we’ve seen all year,” Allen said. “That kid is a stud.”
Despite finishing 3-4, Allen got a gutsy effort from his boys. Linebackers John Evans and Tanner Steinour, d-lineman Gio Alcacio and defensive end Jakob Cable were all terrific.
“The linebackers really stepped up,” Allen said. “John played a heck of a ballgame. Tanner and John played out of their minds. And they’re both seventh graders. To see them play the way they played was an awesome sight to see. Gio was disruptive again up the middle. Jakob played his best game. He’s been consistent, but he pretty much dominated.”
For Ellis, linebackers Dixson and Chaffin were great again. The defensive line (J’siere Arnold, Evan Helms, Cas Moore and Dylan Miller) were difference-makers.
“We only rushed four all day and we were keeping pressure on Brady,” Chaffin said. “Connor and Elijah stayed home all game long and kept them in front of us. They had that one long throw, but that’s the best our defense has played.”
The Jaguars went undefeated for the third time in their 15-year history. They also went 8-0 in 2011 and 2014.
“We’re returning the majority of our team next year,” Chaffin said. “We can have a special season next year as well.”
Note: South Davie (2-6) broke a four-game losing streak with a season-ending home win over Forbush, 26-18.
Editor’s Note: This article is being re-printed in its entirety, as much was left out when printed last week.