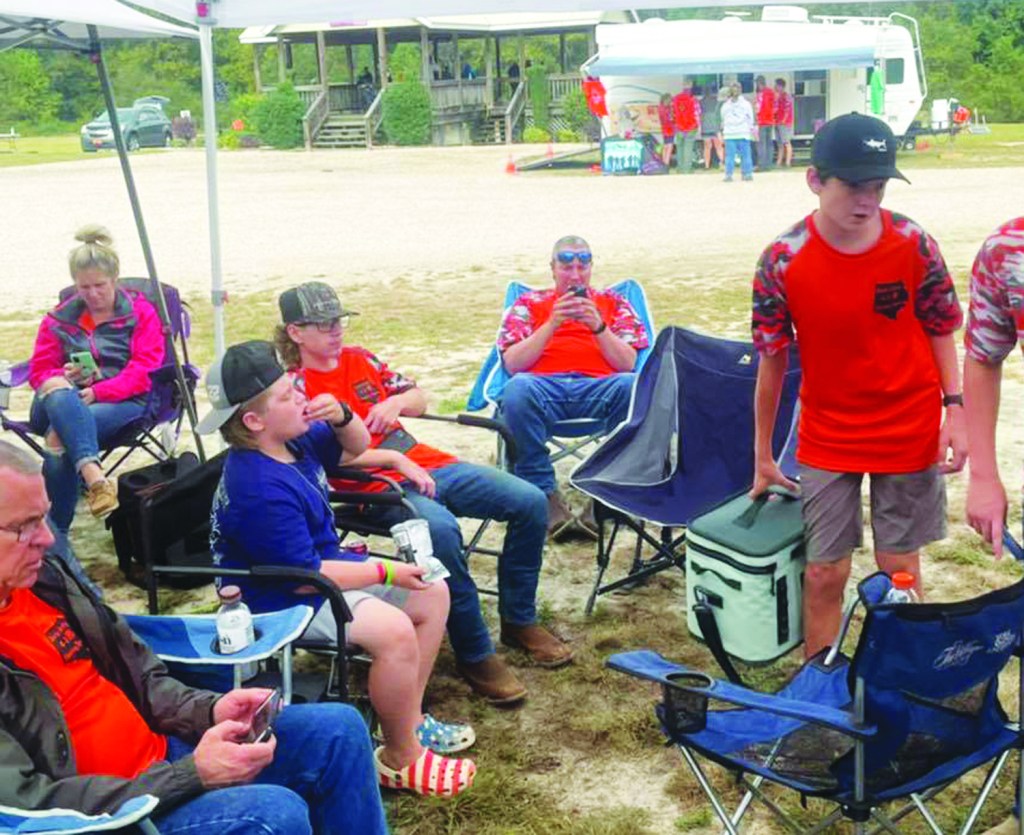 Members of the Davie team relax at headquarters between events.

It was a great day on Oct. 9 for the Davie County 4-H Shooting Sports at the 2021 NC 4-H Shooting Sports State Tournament.
Davie fielded four teams with two Senior and two Junior teams.
The DC Sr Green Team are Air Pistol team champions with a second HOA by Rebekah Walker and third HOA by Ethan Durham and a strong performance by Timothy Walker.
Green Team member Charles Whisenhunt had a good day as well with personal bests in Muzzleloader and Smallbore Pistol.
The DC Sr Goose Eggs won the Shotgun Competition led by Caleb Mathis who finished second HOA with a 24/25 after a shootoff for second and Naomi Hellard with a 23/25. Samantha Taylor, Jacob Durham and Dallie Lakey rounded out the team and all contributed in a big way. Winning the Senior Shotgun Team event is special.
“We have had HOA individuals in the past but team gold had eluded us until this year,” said Nelson Cowden.
Sr “Goose Eggs” Naomi, Samantha, Caleb and Jacob also won the Team Sporter Compound Archery Event with solid scores and a perfect 200/200 and 9Xs by Jacob Durham. Jacob was HOA for the event. Caleb, Jacob and Naomi won bronze for Match Compound Archery missing silver by less than a point and won Silver for the Sporter Recurve Archery competition.
It was DC 4-H’s first venture into Recurve Archery – hence the name “Goose Eggs.” They were afraid they may not actually hit the target and all get “0” scores aka Goose Eggs. Fortunately, their fears did not come true.
In the Junior ranks, the DC Jr Blaze Team won team gold for Muzzleloader with team members Riley Barnes, Tyler Nichols, Wilson Griffin and Connor Mathis. Wilson had a Score of 45/50 which was a tie for first, but ended up third based on tie-breaking criteria. The same 4 also won Telescopic Rifle and finished second in Open-sight Rifle.
Blaze members Connor, Riley and Wilson also won the Air Pistol competition.
Junior members Brantlee Evans, Cameron Hamner and Evan Durham also had strong performances but fell just short of the medals.
The tournament was held at Dewitt’s Outdoor Sports and the Millstone 4-H Center, both in Ellerbe.
“Special thanks to our parents who kept our kids going and in the right places at the right time, fed, hydrated and generally happy,” Cowden said.
Last year’s tournament was cancelled due to Covid-19.
“It was certainly great to get together again. 4-H at the local and state levels are both like a big family. It was good to see old friends and meet new ones,” he said.