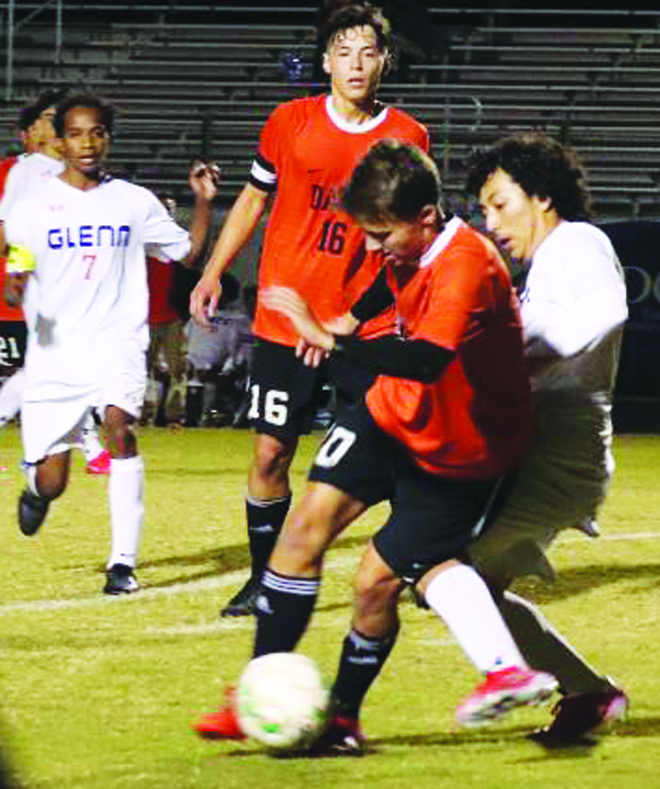 Before Davie varsity soccer team’s final game of the season against Glenn on Oct. 27, the Central Piedmont Conference had brought nothing but pain from 2016 through Oct. 26, 2021.
After a 2-1 overtime victory over visiting Glenn, the War Eagles were floating on a cloud they’d never ridden before. By stopping a 72-game losing streak in the CPC, they completed a six-season quest.
The breakthrough win was unexpected because the War Eagles came in with zero momentum, getting outscored 27-1 in the previous five games.
“I told them before the game and halfway through the game – the seniors are playing potentially their last competitive soccer game of their life,” first-year coach Jason Clark said. “It’s a memory they will take with them for the rest of their life. They will remember how hard they played. If they did not play very hard (earlier), if they did not give it their all, it’s a chance right now to put everything out there and have no regrets for the rest of their life in how they played. And that’s what they did. I told the underclassmen that it’s not about them in this game. It’s about playing as hard as you can so the seniors have a walkaway memory. And that’s exactly how they played tonight.”
The game did not start well. The Bobcats scored in the first three minutes. “The first 10 minutes of the game was all on our side,” Clark said. “They were attacking hard.”
It was 1-0 at halftime. But if Davie’s offense was dormant in the first 10 minutes, it was anything but the rest of the way. The War Eagles outshot Glenn 14-6 in the first half and 12-1 in the second half. They just needed to close the deal on one of the attacks.
“We were heavily attacking the whole second half,” he said. “We hit the crossbar a couple times. We kicked it over a couple of times. We had about four corner kicks. We were in control; we just never could get that goal.”
In the final five minutes of regulation through two 10-minute OT halves, Felipe Flores, Alex Tarbet and Victor Calix came to the rescue.
With 4:50 remaining in regulation, Flores flipped a little pass to Reyes, who fired at the goal from the 15-yard line. The keeper dove to his right but failed to stop it. Game tied at 1. The Davie bench exploded. Reyes, a senior, received three chest bumps.
“Felipe turned and was going to take the shot,” Clark said. “But he was covered by two people and he did a short pass to Brian. Brian turned and took a no-look shot.”
Glenn’s only shot of the second half came with :20 on the clock. It sailed over the goal.
In the first half of OT, Davie was awarded a free kick from the far right on the seven-yard line. Clark summoned Tarbet, a freshman, to take the shot. Three Bobcats formed a wall. Tarbet drilled a remarkable shot in the upper left corner to give Davie a breathtaking 2-1 lead. Teammates raced to hug him. Players on the bench jumped up and down. Clark pumped his fist.
“It was about 22 yards out,” he said. “He’s left-footed and the ball was all the way over on the right-hand side. Normally, Nick Ruff would take all of those kind of kicks. Because it was all the way over on the right-hand side, I called the freshman over because he’s a left-footer and the ball will curve back to the right. He chipped the ball and it went right in the top corner.”
It wasn’t over. With just :29 left in the second half of OT, Davie was called for a foul in the box. Clark pleaded his case, to no avail. Glenn got a penalty kick from 12 yards out. The Bobcat lined up at the 6-yard line. He tried the left side of the net. As if Tarbet’s goal wasn’t spine-tingling enough, Calix dove to his right and blocked it. The rebound went straight to a Bobcat, who had a point-blank shot from the left. It went wide right. Teammates tackled Calix, a sophomore goalie.
“It’s usually an 80-plus percentile of they’re going to make (the PK),” Clark said.
When the final horn sounded, after 100 hard-fought minutes, the hugely relieved War Eagles and their fans went bananas. They dumped the water cooler on Clark. It was quite a win. Glenn beat Reagan 4-1; Davie lost 7-0 and 2-0 to the Raiders. Glenn beat East Forsyth 2-1; Davie lost 7-0 and 6-0 to the Eagles. Davie avenged a 1-0 loss to Glenn on Oct. 4.
“I started all the seniors (James Boles, Nathan Linville, Anthony Ortiz, Josh Clark, James Little, Reyes and Trevor Shue),” he said. “It shows they all have heart. It shows the younger players understood the importance of playing as hard as they can. And what it really taught them is – we can win.”
The War Eagles finished 2-16-1 after going 1-31 across the 2019 and spring 2021 seasons. It was the first CPC win since 2-1 over North Davidson in 2015.
“Of the starting lineup, I will have 10 of the 11 returning (next year),” Clark said. “Reyes was the only senior starter.”
Notes: One day earlier, Davie lost 5-0 at Parkland. … The CPC standings: West Forsyth 13-1, Mt. Tabor 12-2, East Forsyth 9-5, Reynolds 7-6-1, Parkland 5-8-1, Reagan 4-9-1, Glenn 3-10-1, Davie 1-13. … Davie’s JV lost 5-0 at Parkland to finish 0-14, 0-12.

Davie can’t keep up with Glenn; in state playoffs…