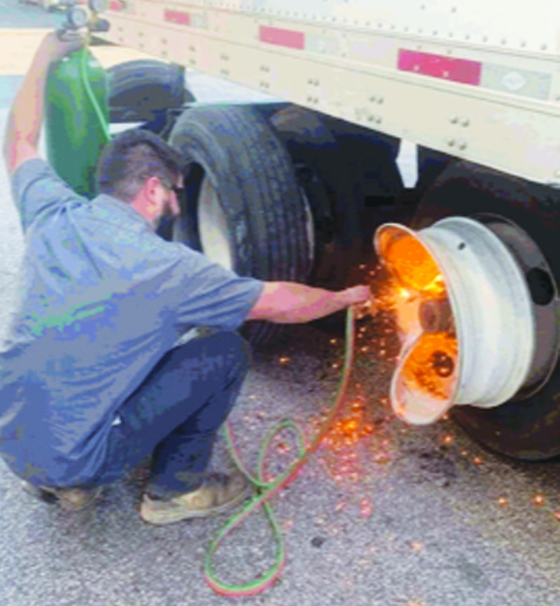 This is the tenth in a series of articles about
the Davie Community Foundation and
its work in the county.

The Davie Community Foundation offers scholarships for students wishing to pursue a career in skilled trades.
Recent shortages in the labor force have created opportunities for students not wanting to follow the path of traditional higher education, to instead become trained in a skilled trade. Plumbers, electricians, construction workers, welders and mechanics are a few of the careers in demand today.
The Rosa and James Clyde Cook Sr. Memorial Scholarship is one of the scholarships that support students looking to enter a trade. Robert and Carolyn Cornelius established the scholarship in 2008 to honor her father. Mr. Cook was a Davie native who ran a garage out of his home for many years. He eventually moved his business to US 158 and Redland Road where he worked on cars, trucks and anything that needed fixing. All five of the Cook boys went on to follow in their father’s footsteps, becoming mechanics, owning their own garages and fixing things even into retirement.
In 2010, Chris Hurt was the recipient of The Rosa and James Clyde Cook Sr. Memorial Scholarship. Hurt was born and raised in Davie County. He attended Mocksville Elementary, South Davie Middle and graduated from Davie High School in 2010.
When he was a freshman in high school, he realized that he wanted to pursue a career as a diesel mechanic. He took the Auto Tech Class for three years at Davie High.
“Jay Hutchins was my teacher who was fantastic. He was more hands-on learning than by the book which is what is needed for trade skills,” he said.
While in high school, Hurt worked for Mocksville Tire & Auto.
“Wayne Hardy, the owner, gave me a chance at 16 years old. This was my first real shop. I worked there full-time in the summers and the afternoons during the school year. Working there and taking auto tech in high school prepared me tremendously for college.”
Hurt and his parents spent time researching schooling options to help him make his goal a reality. They decided that Nashville Auto-Diesel College was the best option since it was a school that catered more towards heavy duty trucks.
“My parents worked hard to make that happen. When I found out I was getting the scholarship I was surprised and excited. It not only helped me out but helped my parents as well.”
Today, Hurt is the proud owner of Hurtz Truck Repair in Thomasville, which specializes in the repair of semi-trucks and 18-wheelers. He also runs a fleet of 3 mobile service trucks that do mobile breakdown repairs.
“It costs a lot of money to tow an 18-wheeler. I have service trucks that go to the truck to make the repair,” Hurt said. His trucks service the Triad area but he’s also worked in Pennsylvania, Alabama, West Virginia, Virginia and Myrtle Beach. He even flew to Indiana with a bag of tools once. “My customers send me everywhere.”
Hurt offered encouragement for students looking to pursue a skilled trade.
“There are many students going to college today for the same thing their parents went for 30 years ago. We’re in a different time now. I went to trade school and had six job offers the day after I graduated. Trade jobs are begging for people and are paying top dollar.”
“The foundation is proud to see how the investments in its scholars reap benefits long into the future,” said Jane Simpson, president and CEO. “If you find yourself in need of someone to repair semi-trucks and 18-wheelers don’t forget about Hurtz Truck Repair. He’s one of Davie’s success stories.”