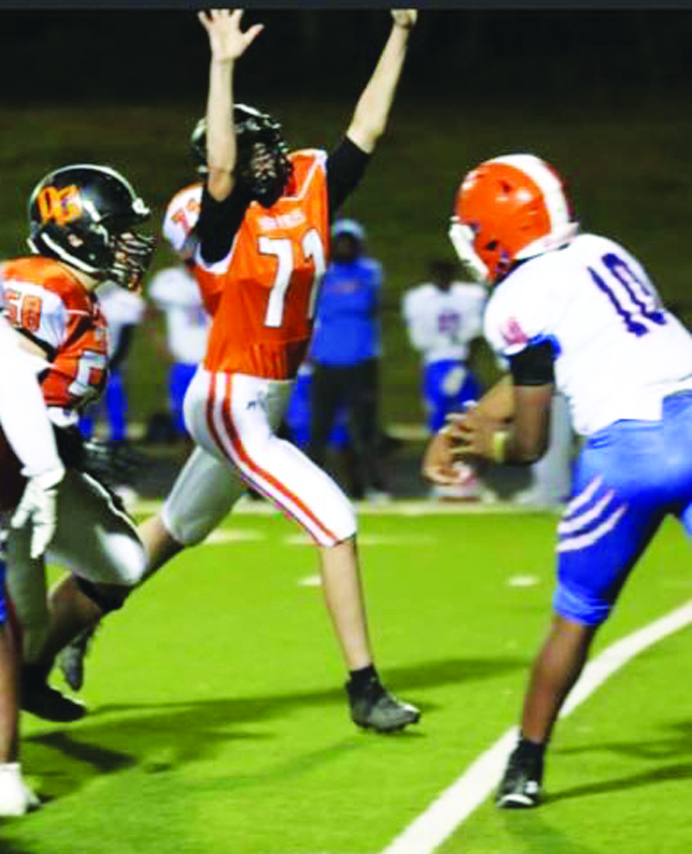 The Davie JV football team could not have scripted a better start in the season finale against visiting Glenn on Oct. 27.
The War Eagles jumped to a 20-8 lead. But it went downhill from there as they were stung by bad breaks, and the season ended in 34-28 heartbreak.
The game was played at the old high school, which was Davie’s home from 1961-2016.
The Bobcats cut into Davie’s 14-point lead with a pick-6. They took a 26-20 lead in unlikely fashion. Quarterback Ty Miller ran for a 20-yard gain. He was gang tackled and fumbled. Glenn scooped it and took it 70 yards the other way for a touchdown. Yes, Glenn went from six points down to six points up on back-to-back defensive scores.
“Those are huge momentum shifts,” assistant coach Blaine Nicholson said. “To have two of those was tough.”
Davie turned it over on downs in the red zone, but the defense would provide a lift. Glenn was attempting to put from deep in its own territory, but it failed to get the kick off. Instead, the Bobcat kicked it out of the end zone for a safety, pulling Davie within 26-22.
After Glenn kicked to Davie, the War Eagles marched down to regain a 28-26 lead. Back and forth they went. Glenn faced third-and-long from its 45, but busted coverage allowed it to complete a 35-yard pass to the Davie 20. It scored with two minutes left to take the 34-28 lead.
The War Eagles did not blink. They put a drive together, got deep in the red zone and appeared to tie the game with little time left. Miller found Aaron Kotas for a 10-yard TD, only to see a yellow hanky on the turf. Kotas was called for illegal touching. Nicholson did not agree with the call. What a moment it would have been for the freshman receiver. Instead, it turned into a brutal reversal of fortunes.
“The corner shoved our receiver out of bounds,” Nicholson said. “You have to immediately try to get back in or it’s a penalty. He runs us out of bounds and continues running with him out of bounds. Ty flips a pass to (Kotas), who catches it in the end zone. We think we’ve tied the game. Well, they called a penalty on us and said we didn’t try to immediately get back in.”
That was that. Davie finished 5-3 overall and 4-2 in the Central Piedmont Conference after winning the previous three games.
Miller (30 carries for 184 yards and a TD) and Archer Richardson (22-88 rushing) were workhorses on the ground. Miller threw three TDs while hitting 11 of 22 passes for 174 yards. The TD passes were 19 yards to Leon Bradshaw, 18 to Grey Deal and 32 to David Patton. Bradshaw and Richardson had three receptions each, while McKinley Reavis and Deal had two each.
The defensive standouts were safety Landon Waller (interception), a defensive line of Landon Barber, Dane Porter and Grayson Cayton, and defensive back Connor Hood.
“Landon had a couple of TFLs (tackles for loss) to go with his interception,” Nicholson said. “They could not run the ball on us. Connor had a really good game. He did not allow deep throws on him.”
Nicholson said Davie was so close to beating a talented team.
“They had some really, really good athletes,” he said. “It doesn’t look like the well is drying up for them. But we’re not scared of anybody. We looked really good. I think we should have won the game.”