De-escalate or use force? Sheriff’s officers trained for crisis situations 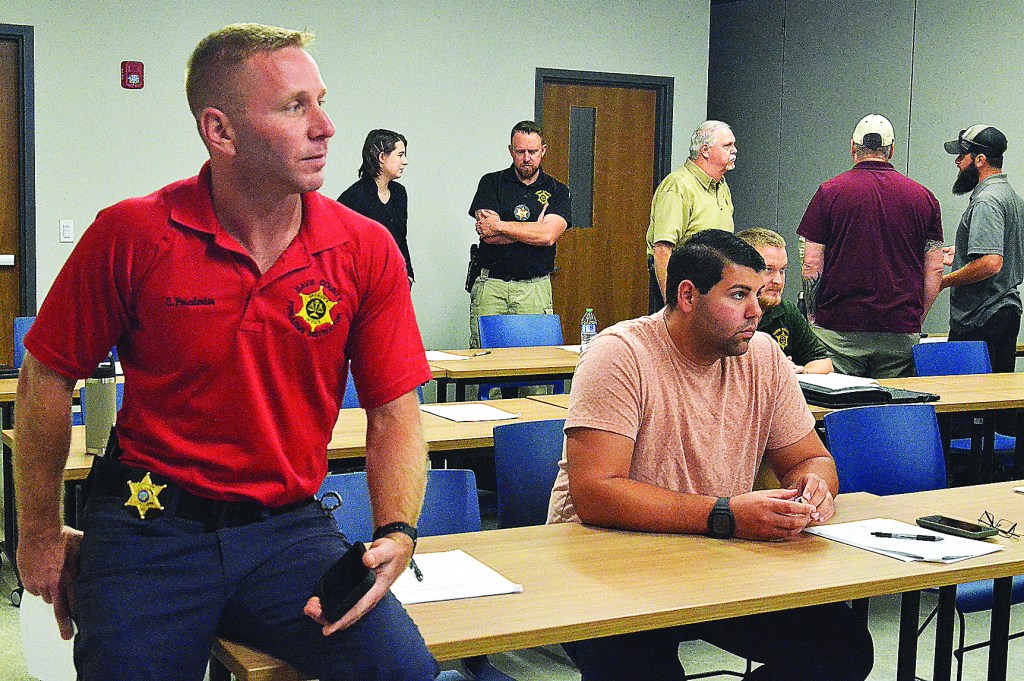 Sgt. Colt Poindexter of the Davie Sheriff's Office listens in on the latest training session. - Photo by Robin Snow

There was a report of a fight, and a police officer rolls up on the scene.
A man staring right at the officer, with his hands in his pockets.
What should the officer do? Order the man to take his hands out of his pockets?
Not so fast.
If there’s a gun in one of the pockets, the man could have it out and pull the trigger is less than a half of a second. Nobody – not even a trained officer – can react fast enough to prevent that from happening.
There are options for that officer, and those options were explored in a training session with 360 Policing last week at the Davie County Sheriff’s Office.
Officers learned how to de-escalate potentially dangerous situations, protecting not only themselves but those involved in the particular situation.
“It’s a way to communicate with the community,” said Sgt. Colt Poindexter, sheriff’s training officer. “You’ve got to know how to talk to people.”
“It’s using the ability to treat people like humans,” said Eddie Dove, 360 instructor.
That doesn’t mean being soft in every situation. Officers, Dove said, need to know when to be a friend and when to switch to that life or death mentality. And they need to know how to recognize each situation. “If they don’t learn it, they will be winging it,” he said.
The philosophy meshes well with the sheriff’s focus on community policing, Poindexter said. “Community policing isn’t new. Sheriff’s were doing that in the 30s. I was doing that in the 90s.”
The “speak softly and carry a big stick” mentality has been used in policing for centuries, Dove said.
The training is based on years of research, and of looking at how situations were handled in the past.
Should the officer try to de-escalate the situation or show a use of force?
“It’s a merging of both worlds,” Dove said. “You’ve got to be able to flip the switch. De-escalating is an actual skill.”
The two-day training is one of several going on at the sheriff’s office, Poindexter said, aided by a training facility inside of the new department on Farmington Road.
Working with Davidson-Davie Community College and law enforcement trainers Tad Kepley and Mark Sink, officers have taken classes on crash investigations and report writing. “The sheriff’s office looks forward to continuing with more training opportunities to be able to help and interact with all aspects of the public,” Poindexter said.
Officers have also gone through crisis intervention team training (CIT), a required class in Davie.
“It prepares law enforcement to better deal with people in a serious health crisis,” Poindexter said. “CIT is a jail diversion program designed to help law enforcement better understand mental illness, de-escalate people in crisis, and direct them to appropriate care rather than jail. This partnership between the mental health system and law enforcement has many benefits for the community.”