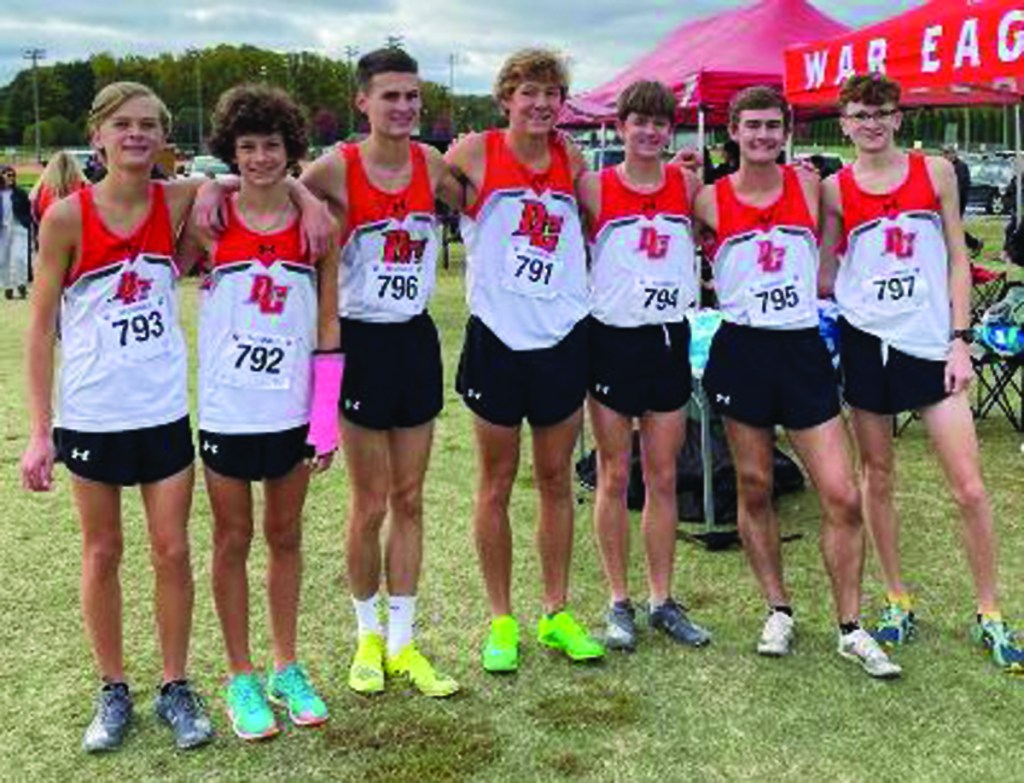 The Davie cross country teams made the familiar trek to Kernersville’s Ivey Redmon Park Oct. 30 for the 4-A Midwest Regional. With a berth to the state championships on the line, the War Eagle boys came up just short in their bid to make history.
Coming into the meet as the ninth seed among 29 schools in the region, Davie figured that it would take a seventh-place finish to advance. When the counting was done, the War Eagles ended up in eighth. However, due to the fact that several schools did not register a team score, the formula used to determine how many schools would advance resulted in only six schools qualifying for states.
The top two boys teams in the state, Mt. Tabor and Weddington, previewed what figures to be a classic state championship showdown as the Spartans edged their Union County rivals by a single point, 45-46. Lake Norman (112), Marvin Ridge (115), Reagan (167) and Mooresville (184) also punched their tickets to the state meet. Cuthbertson (206) was seventh, followed by Davie (271).
Tabor’s Will Soule (15:37) captured the individual title with a four-second victory over Jacob Laney (15:41) of Porter Ridge. Davie was led by Andrew Brown, who placed 35th with a time of 17:04, a mere six seconds shy of qualifying as an individual. Caleb Young was 51st in 17:26, while Reece Yount took 54th in 17:30. Thomas Essic ran the best race of his young career as the Davie freshman placed 66th in 17:52. He was closely followed by Owen Sulecki (67th at 17:52), Cole Swade (68th at 17:53) and Tyler Hill (70th at 17:58). In all, 169 runners completed the 5k course.
•••
The girls race was just as exciting as the boys, with Cuthbertson escaping with a 43-47 win over Weddington behind the 1-2 finish of Alyssa Preisano (18:19) and Stella Kermes (18:20). Marvin Ridge (119), Tabor (143) and Reagan were the five teams advancing. The Lady War Eagles placed 17th with 455 points in a field of 154 finishers.
Riley Almond led Davie with a 60th place finish in 21:29. Lexi Kulis was 80th (22:28), Gracie Spicer 91st (22:44), Isabel Kittleson 112th (23:43) and Logan White 127th (24:24) to round out the scoring. Katie Shupe was next in 129th (24:36) and Raelyn Lankford placed 131st (24:50).
“Our guys ran a good race,” said coach Rob Raisbeck. “In order to qualify for states we would have had to have run a perfect race. And even though we came up short, I can’t fault our effort. The guys gave it everything they had. Andrew was strong up front for us; Caleb ran his best race of the season coming back from injury; Reece was steady; and Thomas ran a PR in the fourth spot.
“Our girls are young and our top six will be back next year. We hope to get some of our injured runners back, and there are a couple of middle school runners who will provide immediate help. Riley, Lexi and Gracie provide a solid core, and hopefully some of the other girls will continue to improve. Jeff (Jones) and I are excited to see what Isabel and Raelyn are able to do after only running with us for a couple of months this fall. Isabel, in particular, has improved by four minutes in only eight weeks of training.“
The Dave distance crew will now transition to indoor track and be joined by their teammates in the sprints and field events. The first practice for the team will be Nov. 8.