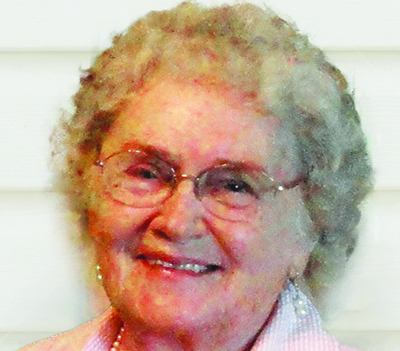 Lelia Neal Essic, 99, passed away peacefully in her Farmington home on Oct. 21, 2021 after years of declining health.
Mrs. Essic was born June 29, 1922, in Caswell County, N.C., on the tobacco farm where her family had lived for generations. The fifth of seven children born to Robert Lee and Amy Garrett Neal, she was the last surviving sibling.
A 1939 graduate of Bartlett Yancey High School in Yanceyville, Lelia attended Lees McRae Junior College where she made life-long friends and fell in love with the mountains and with the school. After one year, she transferred to Appalachian State Teachers College where she met her future husband James Essic. The couple married on Dec.13, 1943. They lived for several years on West End Boulevard in Winston-Salem before moving to the Redland community in Davie County. To accommodate a growing family, they settled on the Cana Road in their permanent home, “Mapleshades.”
The Essics were pillars of the Pino/Farmington community. While James took a public role in many civic organizations, Lelia acted as hostess for numerous meetings held in her home. She was active in the Home Demonstration Club, the Mocksville Woman’s Club, and the First Presbyterian Church of Mocksville.
When her children were out of infancy, Lelia resumed the teaching career that she had set aside at the time of her marriage. A pioneer in special education, she worked in the Winston-Salem/Forsyth County system for 20 years. She reserved her salary for the education of her four children.
Lelia was a pretty, petite redhead with a warm smile and personality. A twinkle in her eye revealed a mischievous sense of humor. She seemed to have boundless energy for everything (except perhaps house cleaning; she much preferred yard work). Her children referred to her as the “Energizer Bunny”. Her life revolved around home and family. She gardened, sewed, practiced handicrafts, collected antiques, and made quilts for her children and grandchildren. She and James loved nothing more than a gathering of family and friends. An excellent cook, she often said, “If you feed them, they will come.” Following the death of her mother in 1992, Lelia and James bought the Neal family homeplace in Caswell County where, to the delight of the extended family, they continued the traditional gatherings at Easter and Christmas.
Beginning in 1983, Lelia and James spent their summers house-sitting on the Eastern Shore of Virginia. They enjoyed views of Occohannock Creek and Chesapeake Bay, visited antique shops, learned about the history of the area, and spent time with daughter Anne’s family. They also hosted visits to the Eastern Shore by the families of daughter Mary Ellen and sons Chip and Neal and by numerous friends.
James died in 2010, two weeks short of the couple’s 68th wedding anniversary.
In addition to her parents, preceding her in death were: daughter, Mary Ellen Candillo; daughter-in-law, Ruth Forrest Essic; sister, Elizabeth Johnson; and brothers, Garrett, Algernon, Robert, David, and Ben Neal. She is survived by: 2 sons and a daughter, James Edward Essic Jr. (Chip) and his wife Judith, David Neal Essic Sr. and his wife Brenda, and Lelia Anne Barnes and her husband Brooks; son-in-law, John Candillo; 7 grandchildren, Jefferson Essic and his wife Karen, Rebecca Phillips and her husband Lawson, David Essic Jr. and his wife Tammy, Forrest Essic and his wife Heather, Joseph Candillo, and Edward and Lelia Elizabeth Barnes; 6 great-grandchildren, Sadie and Thomas Essic, Elliott and Eliza Essic, and Wyatt and Mary Phillips.
A celebration of Lelia Essic’s life will be conducted on Saturday, Nov. 6 at 11 a.m. in the chapel of Eaton Funeral Service (325 N. Main St., Mocksville) followed by interment in Farmington Community Cemetery.
The family requests that in lieu of flowers, memorials be directed to the James E. and Lelia N. Essic Scholarship Fund, c/o Davie Community Foundation, P.O. Box 546, Mocksville, NC 27028.
Condolences: www.eatonfunearlservice.com.