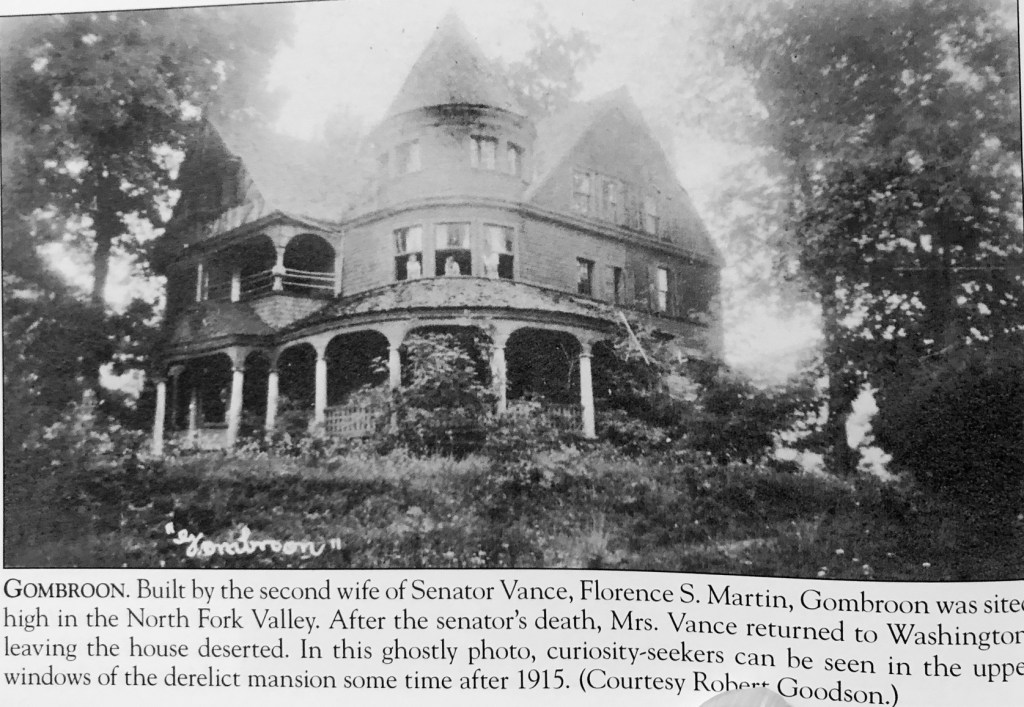 Gombroon, Simulated Diary
By Marie Craig
From the diary of Florence Steele Martin Vance, 1893:
“I was so very excited to finally travel from Washington, D.C. to Black Mountain, North Carolina, in 1887 to see the home that I had designed and built for a refuge for my husband and me. I named it Gombroon, for a city in Iran. My husband, Zebulon Vance, needed a place to relax after his long life of being state senator, U.S. senator, Colonel in the Civil War, Governor for 3 terms in North Carolina, attorney in Charlotte who defended Tom Dula, and again U.S. Senator. His first wife, Hattie Espy and he had 5 sons, one of whom died young, and then his mother and his wife died close together.
“When he and I arrived at Gombroon, north of Black Mountain, we were both so relieved to have a wonderful place to take life easy. Our three-story house was the scene of many parties and visits from friends far and wide. I had ordered beautiful furniture to match the elegant home for our pleasure and for entertaining. Gombroon sat on a hill surrounded by deep woods that gave us such pleasure for walks and watching wildlife. The birds seemed to know to sing to us each morning and evening as we went for strolls. We had to return to Washington often, but once there, we anticipated our happy return to our oasis.”
••••
From the diary of Florence Steele Martin Vance, 1894:
“It is hard to believe that I wrote those happy words only a year ago. My husband had a stroke and died in April of this year in Washington. There was a funeral in the Senate Chamber and a large group of fellow politicians, friends, and family who rode a special train to take his body to Asheville for burial. 710 carriages behind the Civil War Veterans made their sad way to the First Presbyterian Church and then to Riverside Cemetery. Ten thousand people came.
“Friends brought me to Gombroon where I stayed for a few days. But it’s not the same with him gone. I will probably pack up a few things and return to Washington, never to return. I imagine the house will sit empty and be a sad reminder of the wonderful times we enjoyed here for seven years at Gombroon.

Hidden Horrors: What Nobody Sees
By Julie Terry Cartner
The perfect couple. That’s how they seemed. She adjusted the light blue shawl over her bare shoulders and relaxed into his arms. No point in fighting it. She knew how people saw them. He, dark, athletic, handsome. She, blonde, petite, beautiful. She didn’t feel beautiful, but that didn’t matter to anyone else. “Isn’t that right, Sweetheart,” his voice broke through her reverie.
“Of course, darling,” she replied obediently, mentally chastising herself. She needed to pay attention to the conversation. She had no idea what she’d just agreed to. Turning to the couple they’d recently met, she smiled, generally a safe thing to do.
“Then it’s settled, the other man said. “Tomorrow we’ll go sailing, just the four of us.” Stiffening slightly, but enough that her husband felt it with his arm wrapped tightly around her waist, she held her tongue as the men agreed on a time and meeting place. “Perhaps brunch before,” the man added. The Dory has a great breakfast spread. Say 9:30?”
Her husband agreed, as she knew he would, even knowing, or more accurately relishing, her fear of water, then the couples said good night to each other and went their separate ways. She and her husband went back to their house. She knew he was aware she hadn’t been paying close enough attention. She knew she would pay.
Arriving at home in silence, she went to the nursery to check on the baby while her husband paid the baby-sitter. Once she was paid and gone, with the baby sleeping soundly, her husband entered the room, took her by the arm in an unyielding grip, and led her to the master bedroom, now soundproofed so as to not disturb their child, her reason for living, her reason for staying.
The next morning, only someone watching closely would notice the slight stiffness in her gait, the small wince when she took her seat. On the surface, she looked as she had the night before, impeccably dressed in a warm yellow sundress, her hair held back in a high ponytail, a trio of gold bracelets adorning her wrist. Only a faint glimpse of bruised skin behind the ornate bands hinted at something darker. The two couples breakfasted, chatted, got more acquainted. At one point the other woman smiled at her saying, “My dear, you are a lucky woman. Your husband can’t take his eyes, or his hands off you. What a loving husband you have.”
Even as she smiled and thanked the woman for her comments, she thought, If only she knew. His eyes are on me to make sure I don’t do anything to give our true status away, and his arm wrapped around my waist is there to keep pressure on the bruise on my ribs, to continue inflicting pain, just to see if I’ll flinch. If I do, he’ll find an excuse to take my away and hit me again. There’s a lot of hidden skin left for him to mark. “The perfect couple, that’s who we are,” she replied.
“Affluent women are unlikely to tell friends or family about the abuse, preferring instead, to ‘keep up appearances,’ [Dr. Susan] Weitzman [a published psychotherapist] says. ‘When they do turn to family, they’re often blamed for the abuse or urged to stay in the marriage,’ she says. [One woman’s] mother-in-law drafted a list of ‘rules’ for her to be a ‘better wife’ and avoid angering [her husband].
“That people even ask that question [How can a man be considered a pillar of the community, run a successful company – and beat his wife?] shows how conditioned we are to think that domestic abuse happens only to the lower classes” says Susan Weitzman
Macintosh, Jeane. “Battered – and Wealthy – Wives – Silent Victims Who Think They’re Alone.” New York Post. 6 November 2000.

Day by Day
By Gaye Hoots
I am reflecting on the loss of two more friends in the last two weeks. John Seats was a classmate of our Davie High class of 1963 who worked at Duke Power in Advance with my sister for many years. I remember his sense of humor and friendliness. I have happy memories of him from our class reunions too.
Our class is blessed in having members who work to hold us together. Bill and Kathy Junker host class reunions, Pete and Gail Frye host yearly cookouts for our whole class and Charles Crenshaw keeps us informed by email of class birthdays and happenings. All have worked hard to fund a class scholarship that has been returned in spades by the recipients who are the descendants of class members.
We have a large number that served as teachers, coaches, nurses, and a doctor. Many of these were employed in Davie County. Davie supports education and has a program, Ignite Davie, that provides a two-year education at either site of Davidson Community College free to all who apply. This program is a dream come true for many students. My great-granddaughter will be a dual enrollment student at Davie and was the fourth generation of our family to attend Advance Elementary School.
The other friend I lost was Chris Watkins, who served with the Davie County Sheriff’s Office as a canine officer before having a series of strokes and heart attacks. I keep in touch with his family on Facebook. He and his wife raised two children who love and respect their parents and are good parents themselves.
This week I was back in Advance for family time with my sister and her family. My grandson, Vann, who is in the Navy, flew in from Colorado for a friend’s wedding. Our family and his father’s family met him for lunch at Chang Tai. I had not seen him in the last year, and it was great to see and hug him. He will be making career choices in the next few months but plans to stay with the Navy.
One of the options he considered was EOD, what I believe is the bomb squad. It sounded dangerous to me, so I researched it, and according to the internet statistics published, it is not as scary as traveling in a vehicle. My family keeps me on my toes, and I keep them in my prayers.
Davie County has always had a community sports league, and I played and coached briefly in this many years ago. A team sport is key in learning to play and work with others. One of the events I enjoyed was a ballgame Faye’s five-year-old grandson, Weston, played in. I was amazed that these young kids could play as well as they did and play as long as they did. Weston’s mother helped with the team, and his father was in King helping with his sister’s team. Their older sister is on the Ellis School tennis team. I believe time and money spent on sports for kids is well spent, and I want to thank all those volunteer coaches and parents who make it happen.
My fondest memories are of playing basketball and softball, and I owe that interest and opportunity to Vestal Potts, who dedicated his time and energy to those programs for most of his life. I also have good memories of the teachers from Shady Grove and Davie High. I believe that the small schools offer so much more than the larger ones can when each student is known by name and has a chance to play sports instead of competing for a spot before they can learn the fundamentals of the game.
We were lucky to have this in our past, and we are fortunate to have lived in a small county that looked after everybody’s children. Today we are blessed to observe our children and their children thrive in this environment.