North too much for South football 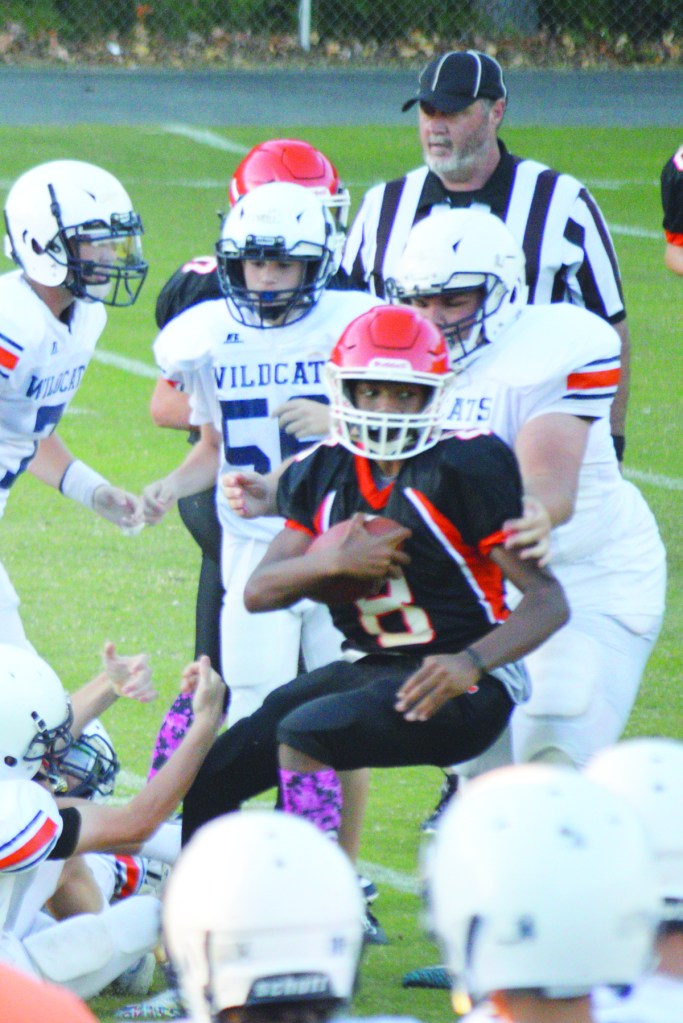 Blake French, Gavin Reese and Isaac Swisher took turns making highlight-reel touchdowns, and Gio Alcacio anchored the defense as North Davie’s football team roared past host South Davie on Oct. 20.
After falling to 1-3 on Sept. 29, the Wildcats were thrilled to be 3-3 after beating South 29-14. The Tigers dropped to 1-6.
Three of North’s four touchdowns were big plays. The first one was a 50-yard pass from Brady Marshall to French, who beat his defender on a go route.
“We got a one-on-one matchup we were looking for,” coach Timmy Allen said. “Blake caught it in stride; it was a great throw. There were hands in Brady’s face and he threw a nice ball.”
After fullback Javon Carter finished a scoring drive with a 1-yard plunge, Reese returned a kickoff 65 yards to the house. Give a big assist to Jakob Cable.
“It was set up by a great block by Jakob,” Allen said. “Gavin made something out of nothing. South had it played up pretty good. Gavin just broke a couple of tackles, they lost contain and he picked up one big block on the sideline.”
After a 20-6 first half, Marshall tossed his second TD, this time a 35-yarder to Isaac Swisher. The catch was a thing of beauty.
“It was one of the most beautiful catches I’ve seen at the middle school level,” Allen said. “It was a one-handed catch. It was a little off target and Isaac caught it over his shoulder one-handed.”
Both of South’s TDs were on runs by quarterback Jamarius Pelote, who left an impression on Allen.
“That kid is a stud,” he said. “He’s a ballplayer.”
On the other side of the ball, South simply could not block Alcacio, a 6-1, 325-pound nose guard.
“We played as good on defense as we have all year,” Allen said. “Gio stepped up at nose guard and he ate the whole game. He had been playing a one technique. We put him at nose guard and said: ‘Go, Gio.’”
Allen gave credit to defensive linemen Jathan Redmon, Carter and Cable and linebacker Tanner Steinour.
“The d-line did a solid job,” he said. “The linebackers are starting to get it. Tanner really stepped up. He’s a little undersized, but he was plugging holes. Jakob is really coming along at defensive end. He’s forcing plays to go back inside. He’s not getting exposed on the edge and that’s big for middle school.”
Let’s not overlook North’s kicker, seventh grader Max Rappaport.
“He’s a soccer player,” Allen said. “The kid can absolutely kick. His pooch kicks were perfect. He put them in no-man’s land. Then we told him to kick it as far as you can, and he about kicked that thing to the end zone. I will say this kid will be the next great kicker at Davie. He can already nail 35-yard field goals. He’s made extra points in games, but we haven’t lined up for a field goal. He’s a game-changer on kickoffs.”