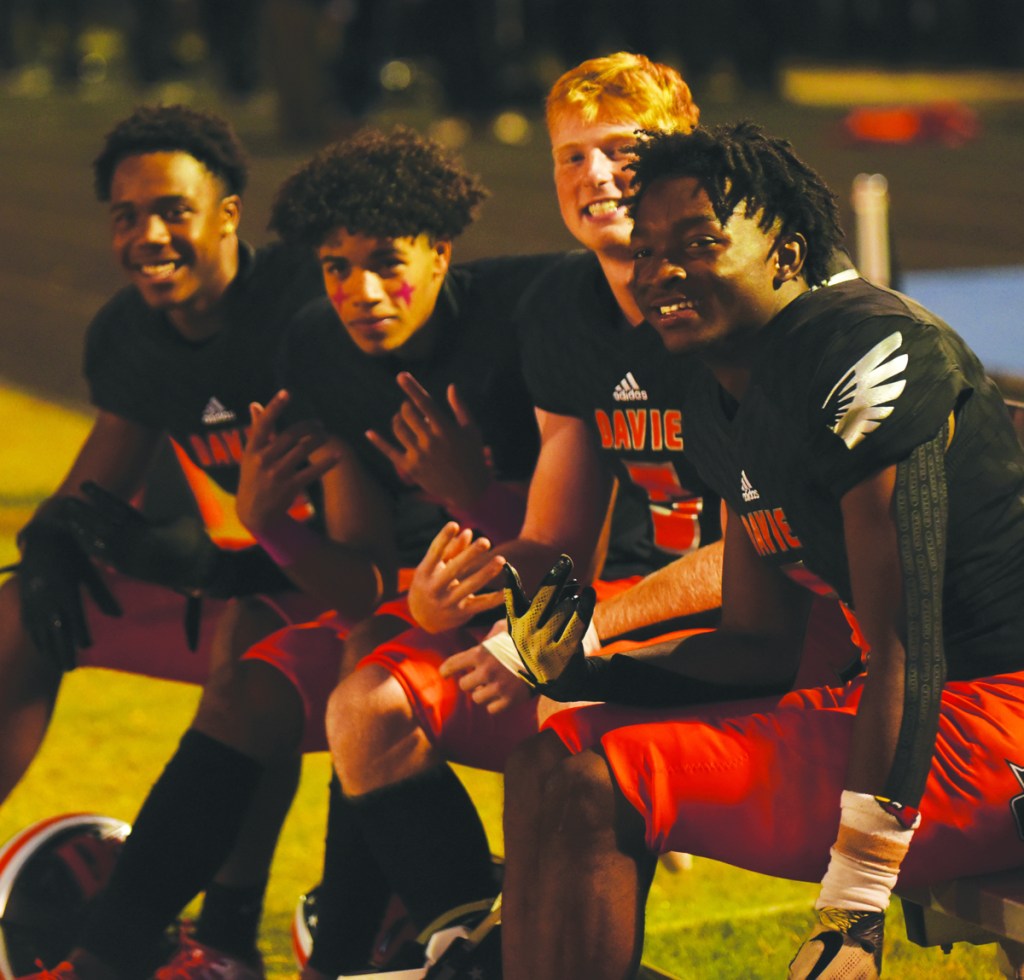 After getting run through a blender – losses of 59-21 to East Forsyth, 52-14 to Reagan and 35-14 to West Forsyth, with a thrilling 56-49 victory over Mt. Tabor mixed in – Davie’s varsity football team got a breather Friday against visiting Parkland.
The War Eagles had a 14-0 lead after 34 seconds, they scored on seven of eight offensive possessions and won 55-0.
Davie improved to 6-3 overall and 3-3 in the Central Piedmont Conference. The Mustangs dropped to 1-8, 0-6. Considering they had lost 63-0 to Glenn, 49-0 to Reynolds, 73-0 to East Forsyth and 56-0 to Reagan, the result Friday at War Eagle Stadium was no shock. Their only win was 15-6 over Winston-Salem Prep, which is 0-8.
The 14-points-in-34-seconds burst out of the gate came on Za’Haree Maddox’s 85-yard kickoff return to the end zone and Tate Carney’s 15-yard TD run on Davie’s first play from scrimmage, which immediately followed a Parkland fumble and an Andrew Shuler recovery.
“Parkland is a building program,” coach Tim Devericks said. “They’re trying to teach those kids the right things. Hats off to those guys.”
Davie had 27 points before the first quarter ended. The next two scores were Alex Summers’ 43-yard pass to Zymere Hudson and Owen Byers’ 27-yard reception.
“We wanted to focus and come out the right way, especially after a disappointing loss last week (to West Forsyth),” Devericks said.
The War Eagles averaged 11.3 yards per play as Markel Summers gained 104 yards on seven carries. A. Summers hit 8 of 13 passes for 168 yards, hooking up with Hudson (3-78), Byers (3-48), Brodie Smith (3-53) and M. Summers (1-10). Carney (6-48), Ty Miller (3-32) and Maddox (1-13) contributed to Davie’s 187-yard effort on the ground.
The biggest highlight was Byers, a senior who enjoyed his first varsity catches and first varsity TD on Senior Night.
“We wanted to try to honor some of the seniors who have been around for a while,” Devericks said. “Owen didn’t play all four years, but he’s a kid who has tons of energy. He comes out and works hard every day, and he’ll do anything you ask. We tried to give him an opportunity to get a catch tonight, and it worked out.”
Parkland only managed 64 yards of offense. Mason Shermer added a fumble recovery, while Logan Yokley and Owen Brandon had interceptions.
“It was a good pick (by Yokley on a long third-down pass in the second quarter),” Devericks said. “It was a double move, he stayed deep and made a good play on the ball. I think that comes from him missing one earlier in the year. He learned from his mistake.”
The War Eagles picked up their largest win in 14 years (56-0 over Berry Academy in 2007) in a game that ended in less than two hours. The clock ran continuously from late in the second quarter until the end.
Davie enters Friday’s regular-season finale at Glenn in fifth place in the eight-team CPC. East Forsyth (4-1), Reagan (5-1) and Glenn (5-1) are tied for first in the loss column.
Although Davie is fifth, there’s a chance it could sneak into the playoffs even if it loses to Glenn.
“I think because our RPI score is so high – at this time,” Devericks said. “But it would sure feel good to get a win at Glenn.”
Notes: Davie has clinched a third straight winning season. … Davie has a four-game winning streak over Parkland, although this was the first meeting since 2016. … After playing one of the easiest games in memory, Davie will face a bear of an opponent Friday in Kernersville. It has never beaten Glenn, losing all four meetings. The Bobcats are 6-2 overall and coming off a 44-38, triple-overtime loss to East Forsyth.
Junior Varsity
The JV game Thursday in Winston-Salem was very similar to the varsity contest. Davie stacked up 45 points in the first half and settled for a 51-8 win.
Archer Richardson (seven carries, 82 yards), Skylar Whittington (13-70) and Miller (4-55) shared the rushing load. Miller went 3 of 4 passing for 96 yards, and each completion resulted in a touchdown. Grey Deal caught 20- and 22-yard passes and Leon Bradshaw had a 54-yarder.
Miller was involved in five of Davie’s six TDs, including two rushing scores.
“They had a total of seven linemen,” coach Perry Long said. “That was for defense and offense.”
Davie (5-2, 4-1 CPC) has a three-game winning streak.