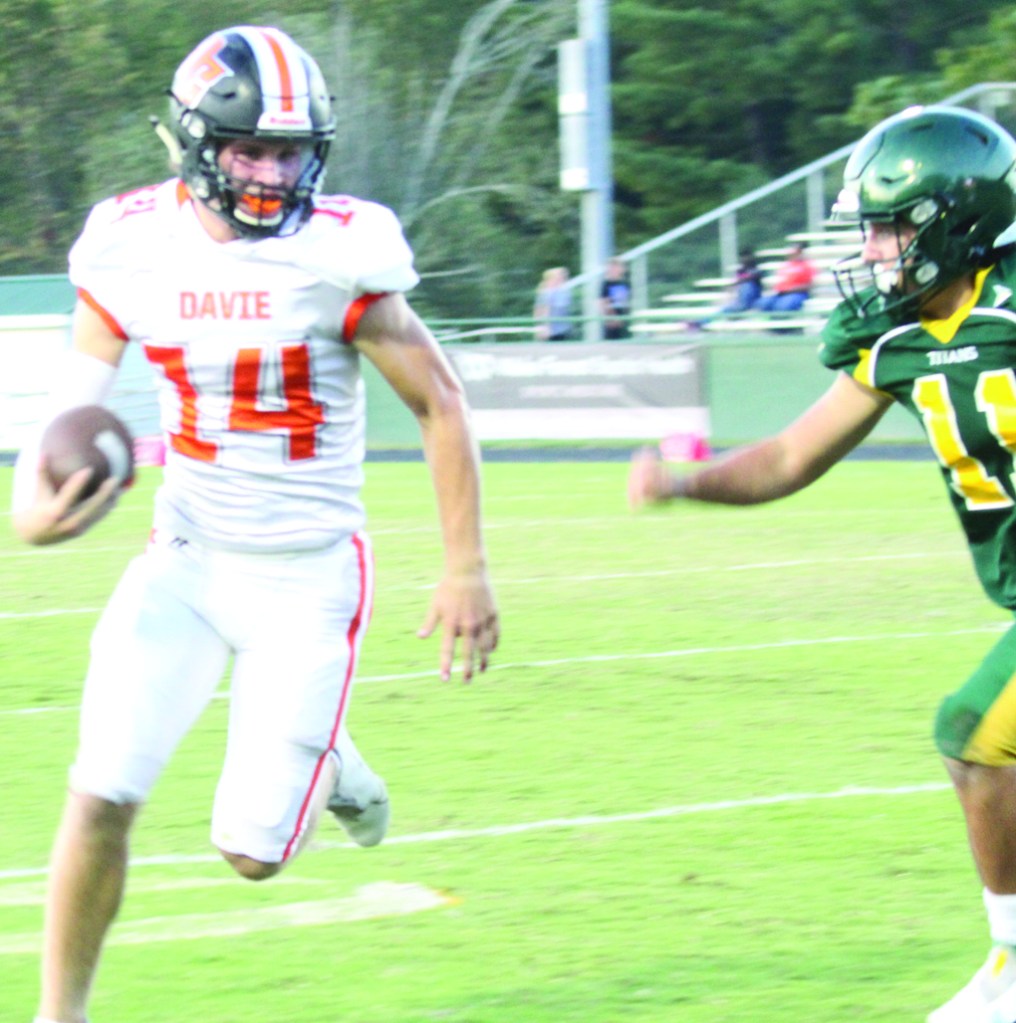 Davie’s JV football team did something unthinkable at West Forsyth on Oct. 14. It gave up 52 points … and won going away.
The War Eagles – this is not a misprint – torched the Titans’ defense on the way to a 70-52 victory, setting single-game records for Davie points and total points between two teams.
It was another spectacular chapter for an offense that is scoring 41 points on average.
“It was unreal,” offensive coordinator Matt Gould said after Davie scored touchdowns on nine of 11 possessions. It also went 8 for 9 on two-point conversions, all eight being running plays.
The score at the end of the first quarter was 22-8 in Davie’s favor. Both teams scored 16 in the second quarter, resulting in a 38-24 halftime lead for the War Eagles, who scored 16 each in the third and fourth quarters.
With West’s defense fixated on quarterback Ty Miller, running back Archer Richardson ran roughshod over the Titans, carrying 26 times for 232 yards and two TDs.
“Ty made some big plays, and they were so worried about him they backed the secondary up, were covering the receivers deep and had an extra guy spying the quarterback,” Gould said. “So Ty was not selfish and he handed it off. Archer was able to take advantage of them focussing so much on Ty.”
It was just another day at the office for Miller, who rushed for 119 yards and four TDs on 18 keepers and threw for 193 yards on 8-of-9 passing. Skylar Whittington chipped in 12 carries for 40 yards, including two TDs.
For the second week in a row – Davie outscored Mt. Tabor 36-24 on Oct. 7 – Grey Deal played like a star. After burning Tabor with six catches for 164 yards, he put up 138 yards on three catches against West, including a 55-yard score. Miller completed one pass each to Leon Bradshaw, McKinley Reavis, David Patton, Richardson and Kobe Thompson.
“Grey had another big night,” Gould said. “Braddock (Coleman, who suffered an ankle injury against Tabor) was banged up and Grey stepped up. He keeps working hard. He’s got good hands. We’ve finally been able to showcase him the past two games.”
Davie (4-2 overall, 3-1 Central Piedmont Conference), of course, doesn’t put up those gaudy numbers without stellar work from the offensive line.
“Our OL had a phenomenal night,” Gould said, pointing to Jackson Powers, Kevin Lazuro, Ryder Strickland, Chad Russell and Cole Thomas. “It was a dominating effort from the OL. There were big holes (for Richardson).”