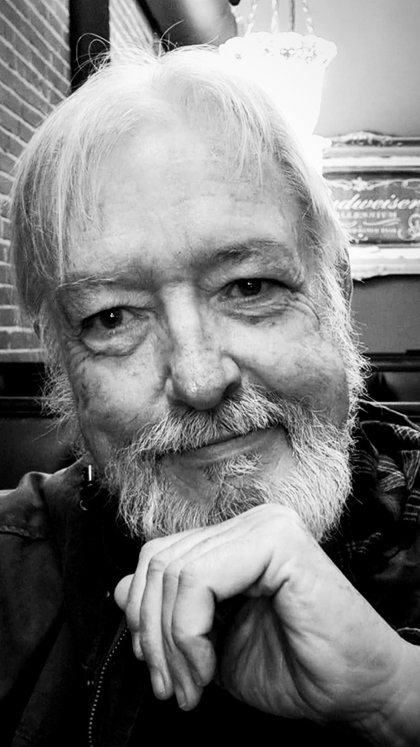 Jeffries Ray “Jeff” Ayers, 76, was born in Rockingham County on June 5, 1945 to the late Jeffries Lee Ayers and late Stella Reed Ayers Livengood. His wife, Bonnie, and daughter, Sarah, were with him when he died at the Kate B. Reynolds Hospice House early Sunday morning, Oct. 3, 2021.
Upon his father’s death, he and his mother moved to Jacksonville, NC, where she worked for the VA. He spent his informative years in South Carolina, Florida, New Mexico and California. He graduated from Santa Fe High School and attended Western New Mexico University in Silver City, N.M., then San Diego State University in San Diego, Calif.
He showed artistic ability at a young age. While living in Santa Fe, he studied with several of the local artists, including Janet Lippincott, who was a part of the artistic movement called the New Mexico Modernists. Like her, his art was abstract, as well as other painting mediums. His specialty was portraits. For years he showed locally in Winston-Salem and Mocksville art galleries. As age crept up on him, and his hand wasn’t as steady, he switched to photography. His keen eye caught the beauty of God’s work and wonder of nature.
He met Bonnie in 1974 while working at Southern Bell in Salisbury. They were married for 42 years.
Survivors: his wife, Bonnie Foster Ayers of the home; and their daughter, Sarah Ayers McFarland and son-in-law Michael of Wake Forest; 3 granddaughters, who called him Papa, Avery Elizabeth, Abigail Grace, and Ansley Isabella; step-sister, Patricia Livengood and husband Tom of Bermuda Run; nieces, Heather, Ashley and Julie and their families; his sisters-in law, Jean Foster of Wilkesboro, Rachel Reavis and husband Bill of Wilkesboro, Sandra Foster of North Wilkesboro, Betty Florence of Gambrills, Md.; and several nieces and nephews and their families.
He was also predeceased by his step-father, Philip Livengood of Mocksville
He was a kind and gentle person, with a heart of gold. He liked everyone and cherished his family and friends. He loved to feed them. He was a gourmet cook and was known for throwing huge parties. He learned how to cut stones and make precious jewelry from his friend of 50 years, James (Jim) McBride of Mocksville. His other friends of 50 years, Pat and Corky Benson of Pfafftown were fellow artists and taught him the love of kayaking, especially the Nantahala River.
His first cousin and lifelong friend, Tom Jurgensen and wife Connie of Mocksville, also survive. Joe Flowe, neighbor and best friend, was there day and night. He loved to ride his motorcycle and leaves behind riding”friends Paul “Max” Conklin, George “Gypsy” Hamilton, Jim Everhardt, Bob Loftis and their spouses. He was preceded in death b riding friend Joe Phillip.
A private graveside memorial service is planned for a later date.
Memorials: Kate B. Reynolds Hospice House, 101 Hospice Lane, Winston-Salem, 27103; or Fishing Creek Arbor Baptist Church, 2446 Fishing Creek Arbor Road, Wilkesboro, 28697.