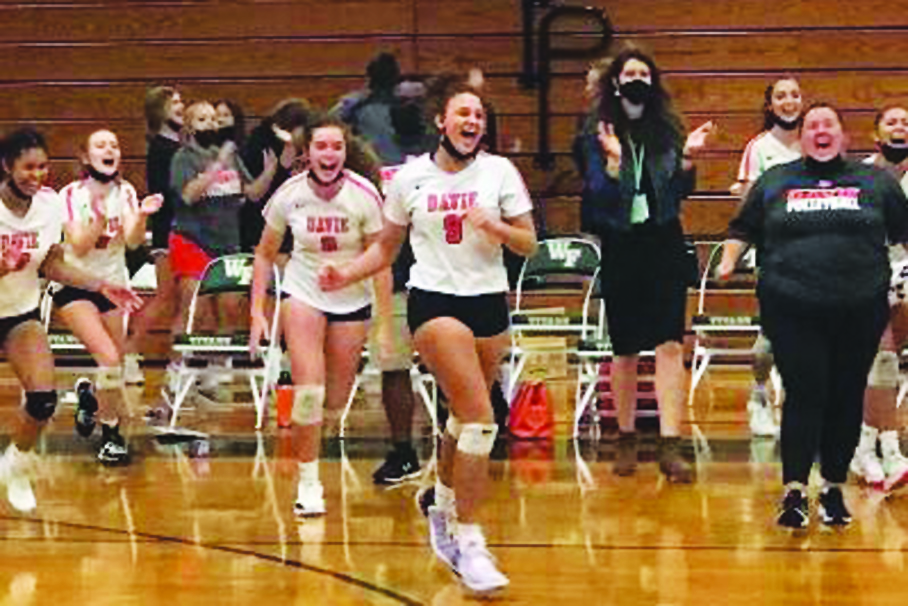 After stumbling at East Forsyth on Sept. 28, the Davie varsity volleyball has enjoyed one of the best four-match stretches in program annals, which is saying something when your seventh-year coach has a 122-42 record.

The run started with a scintillating 3-0 win over Reagan, which had captured 27 of the previous 31 meetings. Four days later, Davie tore through a vaunted 2-A program in a nonconference match, winning 3-0 over East Surry. After brushing aside Mt. Tabor, the War Eagles took a kick-butt, no-nonsense attitude to Clemmons and buried West Forsyth in three sets.

For the longest time, the Central Piedmont Conference championship wasn’t Davie’s to win. Now it is in great shape to, at worst, finish in a tie for first.

This is the final week of the regular season. West and Davie are both 10-2, but one of West’s final two matches is against East Forsyth. Davie has Parkland and Glenn left, and it will be a huge favorite in both.

“It’s been hard,” coach Amber Brandon said. “We went to Reagan (Sept. 7) and were super frustrated with how we played (in a three-set loss). The East Forsyth game was a really tough game. I wasn’t there (due to a death in the family) and that’s something I’ve struggled with as a coach. Our backs were against the wall. We had to beat Reagan and West. The girls decided they were not going to be beaten.”

“We played really, really well,” Brandon said. “I was a little nervous about playing a big game so close after Reagan. East has some great offensive firepower, but we felt pretty confident we would be the best defensive team they have seen. We wanted to be strong on defense, frustrate them on defense and do a good job from the service line – and that’s exactly what our kids did.”

Superb serving from Emma Hayes, Aimee Loj and Peyton Justice was the biggest reason for the Davie avalanche.

“Emily Garner has been our dependable kid from the service line,” Brandon said. “As the season’s progressed, Aimee has done a really good job of getting on service runs. All three sets started out close and then we had someone who would bust it wide open from the service line. In the first set, Emma did that. In the second set, it was Aimee. In the third set, it was Peyton.”

While Hayes and Sadie Eddinger drew praise for their work as setters, Brandon said Justice, Kimball Little and Garner have had their fingerprints all over Davie’s success this season.

“A huge part of our defense is Peyton,” she said. “To me, she is the strongest (libero) in our conference and probably one of the strongest in the state. Most defensive specialists are either really strong on defense or really strong in serve-receive. She is solid at both.

“Kimball comes in as a defensive specialist and I think she’s our secret weapon to being successful defensively. Probably at any other school in our conference, Kimball would be the libero. When we play teams with a really powerful hitter, we try to match Kimball up with that kid so when that kid is on the front row, Kimball is on the back row.

“Emily is a huge defensive piece. She is one of the few six-rotation kids on our team.”

The War Eagles hosted a less formidable opponent Oct. 5. They outscored Tabor 50-13 across the first two sets as the Spartans sank to 1-12 overall.

On the same night, Davie got help from West Forsyth, which survived a five-set thriller against Reagan. That left the top three spots in the CPC standings at West 10-1, Davie 9-2 and Reagan 8-3.

This was a blockbuster matchup in Clemmons on Oct. 7. West would all but clinch first place outright with a win. Davie needed a win to force a tie at the top.

Justice was money all night.

“We tried to funnel the ball across the court into Peyton’s lap, and she picked up everything,” she said. “When she plays well and we can get our middles involved, we’re a pretty tough team to beat.”

Abigail Reynolds had a strong match, especially in the second set.

“You really can’t game plan against one kid,” she said. “The first time we played West, Ali Angell had a really solid game with a high hitting percentage. Ali wasn’t as dominant this time, but in the second set Abigail exploded. Aimee had a really good game the first time against West and I said: ‘Their middle is staying with you and your job now is to make Abby look like a superstar – and she did.’”

After a slow start to her junior season, Mathis has found her form.

“Kiah came alive in the third set,” Brandon said. “She is coming around right now. She’s back to where I saw her during club season. She got into the offense early, and she has for the last few games. That’s one of the reasons why we’ve looked different the last two weeks.”

Notes: Brandon lavished praise on Garner, a team captain as a junior. “She is the definition of a leader,” she said. “She talks nonstop on the court. If somebody gets frustrated, she’s talking to them. If we get rattled, she calls the team in. I called one timeout (at West); she leads from the floor. It’s really special. You don’t see many kids like her in this day and age in high school sports that’s all about the team.” … While West fell to 14-6, Davie rose to 16-3. … Davie also beat West in three sets on Sept. 14. … Davie has four straight wins over West in a span of 12 sets.