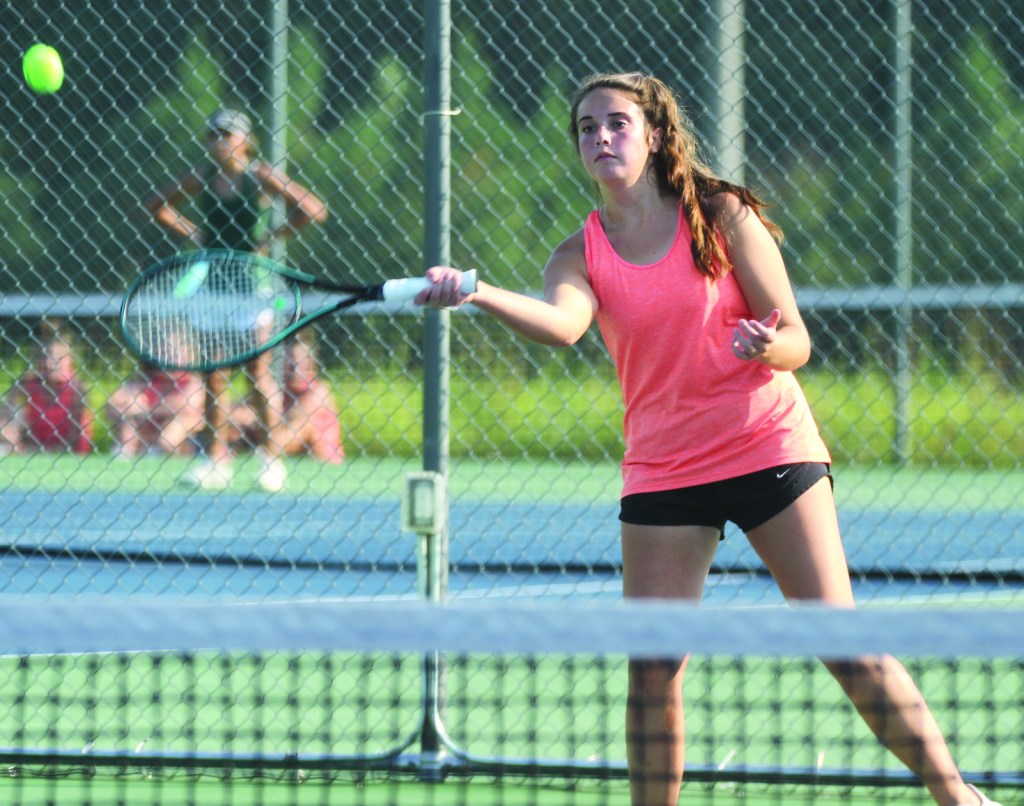 Junior Sarah West Marklin has won five of her last six at No. 4.

What an incredible regular-season run for the Davie girls tennis team. After going a combined 11-16 the past two seasons to finish fourth and fifth in the Central Piedmont Conference, Davie is the 2021 CPC champion with three matches to go.

Nobody had predicted the War Eagles would go from an also-ran to a gritty team that has somehow, some way won every match, which makes it all the sweeter. Through effort, heart and resilience, they have exorcised all demons on the way to 11-0 overall and 9-0 in the league.

“We weren’t that good last (spring),” coach Collin Ferebee said. “We were trying, we just weren’t that good. We decided let’s get better. The girls have absolutely busted their butts this year to prove Davie is the team to beat, and I can’t say enough great things about them.”

The War Eagles thrashed visiting Tabor for the second time in five days on Sept. 27.

The score suggests that Davie survived a close call at West Forsyth on Sept. 29. It was actually undramatic as the War Eagles made an emphatic 5-1 showing in singles to shred the Titans’ five-match winning streak.

“I was shocked,” Ferebee said. “I was expecting to win, but to beat them 5-1 in singles, man, the girls stepped up. They wanted that one because of the Davie-West rivalry and they took it to them. I was ecstatic not to have to worry about doubles at all.”

“She’s been thrown into the fire, but she’s been playing hard all year,” Ferebee said. “She turned a corner against Mt. Tabor and beat the girl that she’d just lost to (four days earlier). She beat her 6-2, 6-2. Then she played one of the best No. 2s in the conference from West Forsyth and crushed her 6-0, 6-2. She has never quit. She always has a smile on her face and keeps working hard every day.”

Davie seems to have a bottomless well of pixie dust. Newsom’s 14-12 clincher marked the sixth time a War Eagle has battled in a third-set tiebreaker. Almost everything has come up roses for the War Eagles, who have won five of the six. Marklin has split two such matches. Fletcher has won one. DeLoach has pulled out two. This was Newsom’s first.

“Leslie has gotten a lot better,” Ferebee said. “She had the tools last spring, but she was at No. 3. She may have felt pressure playing that high in the lineup. Playing at six has given her a peace of mind.”

While the Tabor and West wins came with ease, the match in Pfafftown on Sept. 30 took some doing. DeLoach and Fletcher experienced their first singles losses of the season. Davie finally fell on the short end of a third-set tiebreaker. And yet, the War Eagles found a way to clinch the regular-season championship.

“It may have been the closest match of my career,” Ferebee said. “Credit to Reagan. They absolutely took it to us.”

The drama had just begun. Newsome/Newsom cruised 8-3 at No. 2 doubles, but Koren/DeLoach fell 8-5. It was 4-4 with Marklin/Fletcher playing No. 3. When they fell behind 6-1, it looked like Davie’s perfect record was about to fall and there would be no CPC clinching on this day.

With their fingertips dug into the side of a cliff, Marklin and Fletcher fought back and won 9-7, summing up Davie’s utterly joyful season.

“I looked over and Sarah West and Abby won the first game,” Ferebee said. “I walked back over and it was 1-2. I wasn’t too worried. I looked back again and it was 1-6. I thought: ‘I guess this is how this is going to go.’ I walked back over and Abby’s parents said it was 3-6. I was like: ‘Alright, I’m going to walk back off.’ Court three was like a microcosm of the season. Sarah West and Abby flipped it just like we flipped it as a team. We turned it completely around.”

The top half of the CPC standings heading into the final week of the regular season looked like this: Davie 9-0, West 8-3, Reynolds 7-3, Reagan 5-4.

“I had heard about (freshman Newsome) in middle school and that she would be a big asset,” Ferebee said. “I could tell from the first couple of summer workouts that she’s got a work ethic that is one you can’t teach. All of these girls do. She was apprehensive about playing two as a freshman. Then Karlie (Quinn) got hurt and I was like: ‘Alright, Elliot, let’s see what you’ve got.’ She was anxious but she figured it out. Over the last month, she has improved a tremendous amount, and it’s been so fun to watch.”

In doubles, Newsome/Newsom are 7-0 at one and two. Marklin/Fletcher are 3-1 at two and three.

“I have been massively impressed with how quickly (Newsome and Newsom) have jelled together,” he said.

Notes: The War Eagles beat Reagan by the same 5-4 score on Aug. 30. Their fascinating season has seen them win seven matches either 6-3 or 5-4. … This is Davie’s fourth regular-season title in six years and the first since 2018. This is the third title for Ferebee, who is 49-20 in five seasons.