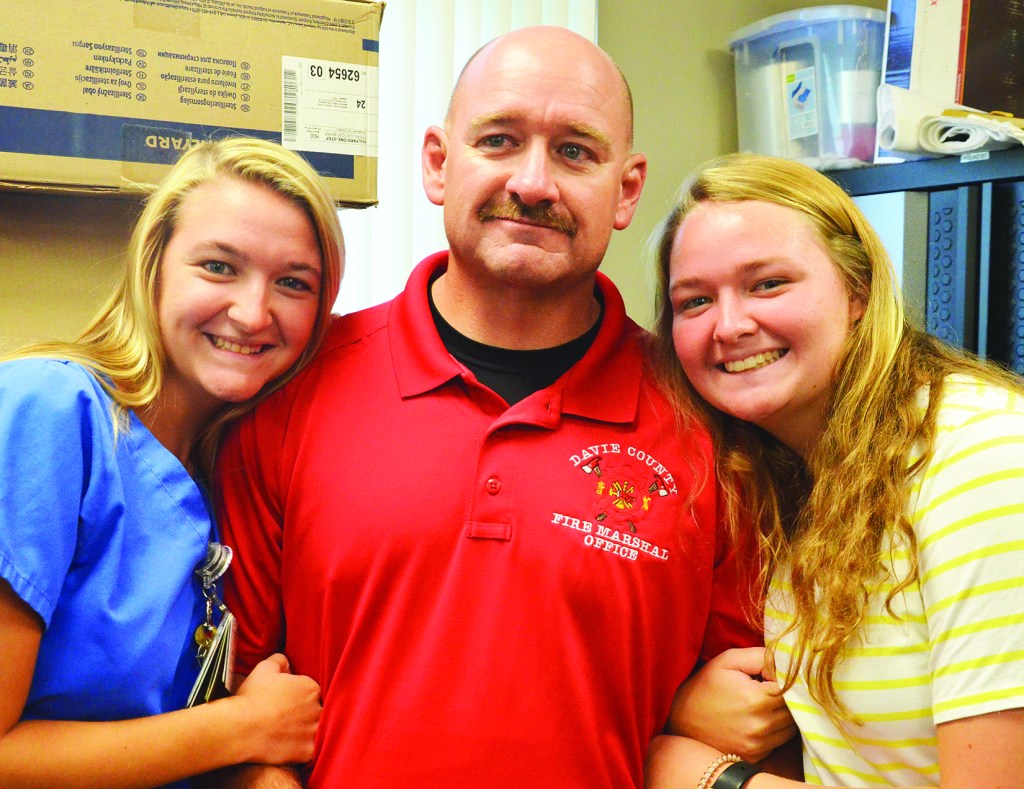 Andy Lipscomb, flanked by daughters Kaitlyn and Ashley, received an award from the N.C. Department of Insurance and the governor. - Photos by Robin Snow

Last week, NC Insurance Commissioner Mike Causey was in Mocksville to present many of the volunteer fire departments with grants, and to honor a long-time emergency services employee and volunteer.

Andy Lipscomb was awarded the Commissioner’s Award, the highest given, for his service.

At age 12, Lipscomb began volunteering with the Smith Grove Volunteer Fire Department. He worked his way through ranks as a junior firefighter and later continued with the fire department, eventually becoming assistant chief.

In 1989, he began his career as a paramedic with Davie County, ending up as chief of operations for the Davie County Emergency Service. For 17 years, he oversaw the day-to-day activities of the EMS crews.

He led four swift-water deployments and was involved in countless saves on the East Coast.

In 2019, he transferred to the Davie County Fire Marshal’s office, working on investigations, including six arson cases.

He was presented the Order of the Long Leaf Pine by Rep. Julia C. Howard, and a flag that had flown over the state capital.

“There were some people who worked their heart out to make this happen pretty quickly,” Howard said. “I want to thank all of the firefighters for what you do for the community. I don’t think people realize that when that fire alarm goes off, you drop what you’re doing and go.”

“We do have good support for the fire service in this county, and I hope that continues,” Lipscomb said.

Causey presented $135,305 to Davie fire departments. He said his office is working with the legislature to try to increase those amounts.

He said he noticed when he took office that it was short on inspectors, which review fire departments to get lower ratings – which means lower insurance rates for homeowners. In four years, that backlog is being eliminated, he said.

All Davie fire departments are rated at a “6” or lower, which is a big deal, Causey said.

“I’m proud of all of these guys,” said Davie Fire Marshal Cameron Webb. “I’m proud to be a part of the team.”

Among those awards given:

From the Yankees to the Braves: New Mocksville company…