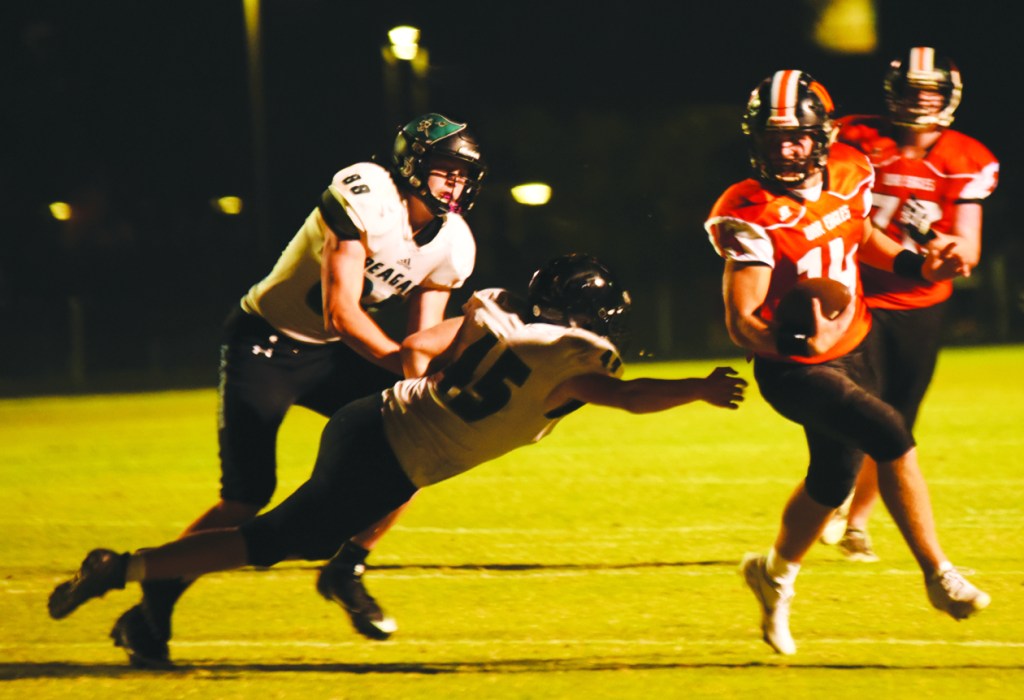 Davie’s JV football team made repeated lunges at visiting Reagan on Sept. 30 but came up on the short end of the scoreboard.

How do you gain 615 yards and still lose? (Quarterback Ty Miller and receiver Braddock Coleman put up video-game numbers.) The flip side of the stat sheet offered an explanation. Davie shot itself in the foot as the Raiders picked off four passes and escaped with a 49-42 decision.

“We had too many turnovers,” offensive coordinator Matt Gould said. “Other than that, we executed well on all the other plays. We had some receivers step up. Braddock had a big night. David Patton had a couple of big catches. It was nice to see different receivers getting the ball.”

Davie raced to the end zone on its first possession to take a 7-0 lead. It was its only lead of the night, although it was never behind by more than two scores. It was 14-7 after the first quarter, 28-28 at halftime and 35-34 Reagan after the third. Reagan opened up a 49-34 lead before Davie scored in the final minute.

Miller’s numbers read like a misprint. He threw for 366 yards on 17 of 30 passing. He ran 21 times for 162 yards and four TDs. The multidimensional sophomore piled up 528 passing/rushing yards.

“Ty had a huge night,” Gould said. “I’m sure he’d tell you he’d like to take away four plays, but we had all that success with the turnovers. He was making plays with his arm and his feet.”

“He’s taken to coaching, working on his technique, finding holes in the zone and finding ways to get open,” Gould said of the freshman. “He’s really progressed since the beginning of the year in his route-running, release moves and all of that.”

It was a breakout game for another freshman receiver, Patton, who had 86 receiving yards on three catches, including a pair of 40-yarders. The first long reception resulted in six points. Skylar Whittington added four catches, Leon Bradshaw two and Grey Deal one.

“David scored a big touchdown in the first half and had another great catch in the fourth quarter,” Gould said. “It was a diving catch on a take route.”

“They keep getting better each week, just little things with their technique,” Gould said of the OL. “They’re starting to get comfortable in their positions and progressing for sure. They had their best night of the season.”