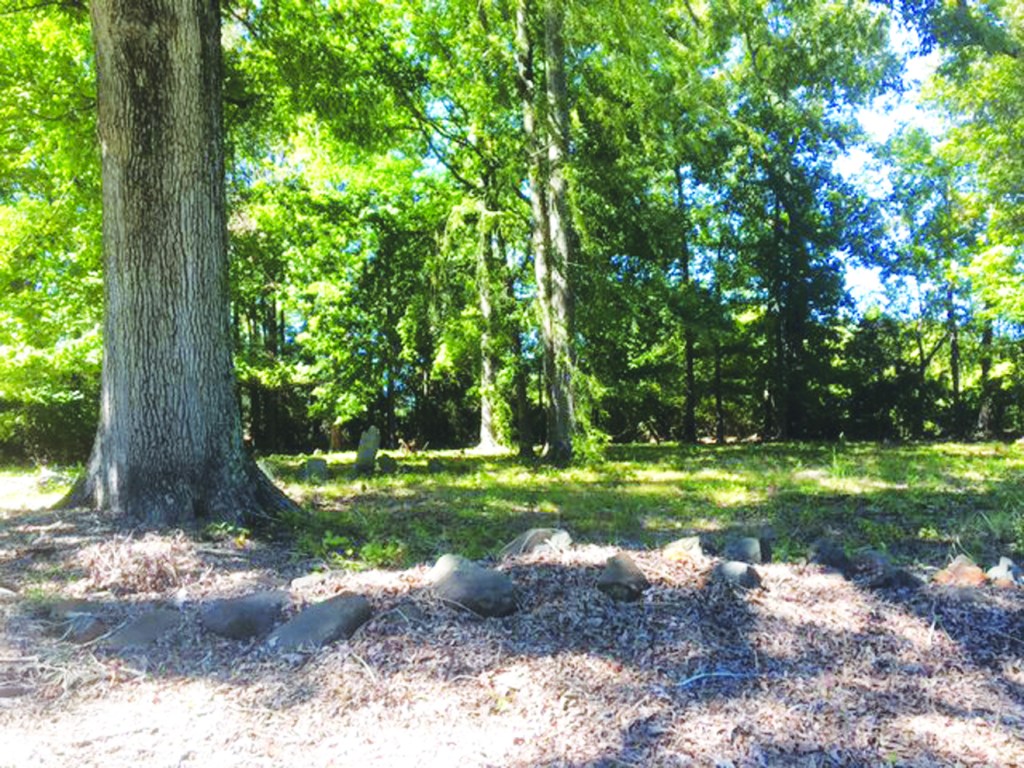 The old Whitaker meeting cemetery is located off US 158 near the present Maw Maw's.

Francis Asbury was born in England into a working- class Anglican family.  He dropped out of school to work as an apprentice to a local blacksmith. However, when he was 14 years old, he was “awakened” in the Christian faith, an event that would set the course of his life.

As he and his mother often attended Methodist meetings, he started preaching at a young age and was appointed a full-time Methodist minister at age 21. When John Wesley, the English founder of Methodism, told a group of ministers that someone needed to go to America to preach the Gospel, Asbury volunteered.

His ship landed in Philadelphia in October of 1771. He soon began preaching in various places. Despite poor health, and in his later years, constant pain, he continued his work for 45 years.

After the Revolutionary War, in which he remained neutral, Thomas Coke, who had been sent to America by John Wesley, ordained Asbury as the superintendent of the American Methodist Episcopal Church, formed in 1787 at a huge conference of ministers. It was interesting to learn that Wesley did not approve of this event, but it happened here and he was in England.

Asbury, a gifted organizer, created districts of churches, each served by a circuit-riding minister who traveled to churches and to homes—wherever they could spread the word. Sunday schools were also his idea, and children were taught school subjects as well as religion.

He was strongly opposed to slavery and even petitioned President Washington to end the practice. That some Methodist owned slaves was offensive to him.

Asbury worked hard for the 45 years of his ministry, and by the end of those years, Methodism was a strong denomination of more than 200,00 members. By the end of the Civil War, thanks to him and the circuit riders, there were at least 1.5 million Methodists in this country.

And I am prouder than ever of my ancestor, Daniel Dwiggins, who was a circuit-riding Methodist preacher in this area and was also one of the founders of Center United Methodist Church.  I will always wonder if he ever preached in the arbor there.

Because I wondered if Asbury ever came to Davie County, I, with the help of Marcia Phillips in the Davie County Library History Room, discovered some interesting information about the growth of Methodism in our county.

One of the earliest churches to be formed here was the Whitaker Meeting House, perhaps as early as 1780.  It was located on the east side of Dutchman’s Creek in what is now the forks between the old Farmington Road and Highway 158 exactly where Maw Maw’s Kitchen is now. The old Whitaker Cemetery remains there, but the original building is long gone.

According to the Rev. D.C. Grissom in his book “The History of Methodism in Davie County,” Asbury did indeed preach there, and according to his journals, which he kept faithfully during his entire career, his sermon on April 3, 1794 was fairly short and on the subject of sanctification. According to his journal, he also preached there again on Oct. 13, 1799. Often it took those itinerant preachers a long time to make their rounds. I also found a notation that he preached at the old Cokesbury School in Advance.

Smith Grove United Methodist Church is a successor of the Whitaker Meeting House. There was also a campground at Smith Grove in 1826, where camp meetings were held in that beautiful grove of trees. The meetings in 1826 had from 150 to 200 tents where families stayed while there, usually for a week at a time. The first actual church building was built there in 1877, and the camp meetings ended around 1886, long after the death of Asbury, so he could not have preached there.

Oak Grove Methodist also claims to be an offshoot of Whitaker’s.  That church was also called McClamrock’s School House, Rogers and Sains before Oak Grove, probably also named because of a grove of oaks there. It was listed in the Mocksville District in 1849, and since 1968 has officially been known as Oak Grove United Methodist Church.

We owe large debts of gratitude to those men on horseback who brought the Gospel to the people long before church buildings were available for worship. Theirs was a difficult life, full of hardships and deprivations, but they were doing what they felt called to do.

Personally, now I wonder if Daniel Dwiggins ever heard Francis Asbury preach.  He would have been in his 40s when the Bishop was in Davie County, but like many questions, it will probably remain unanswered.