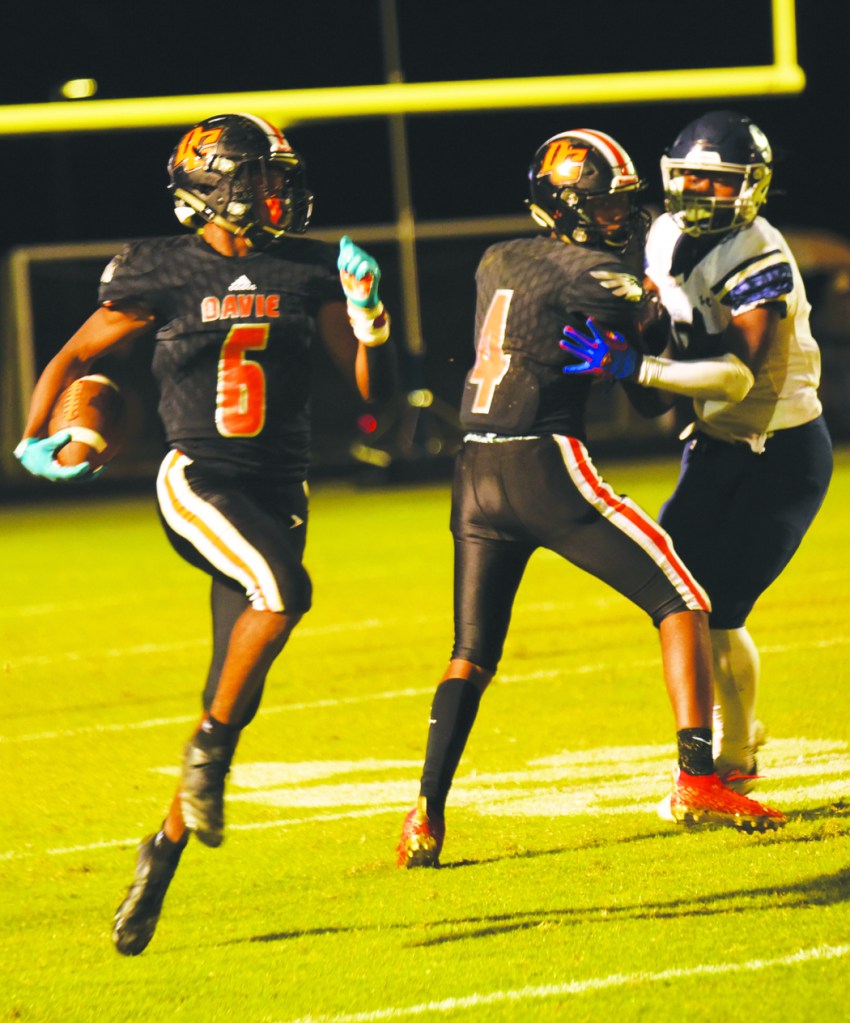 After riding the success of the offense to a 4-0 start, Davie’s football team hit a wall Friday night at War Eagle Stadium.

East Forsyth’s all-around excellence overwhelmed Davie 59-21. The Eagles did whatever they wanted while amassing 28 first downs, 403 rushing yards and 675 total yards. Their offense had 11 possessions, never punted and dealt Davie its worst loss in six seasons.

Take away 11 penalties and it was close to a perfect game for East (4-1 overall, 1-1 Central Piedmont Conference). The War Eagles’ sixth straight loss to East dropped them to 4-1, 1-1.

“We’ve got to clean (the penalties) up, but we beat a really, really, really good team,” East coach Todd Willert said. “If we can clean up these mistakes, we could be something special this year.”

The outcome spoiled a record-setting night for Davie senior Tate Carney, who displaced Cooter Arnold as the king of career touchdowns. Carney etched his name in stone in Davie history on the game’s second play from scrimmage. An East blitzer came around left end and hit quarterback Alex Summers, unaware that Carney had the ball. As left tackle Spencer Williams created an outside lane, Carney stiff-armed a defender and sprinted 77 yards to the house.

“We ran a stunt and our linebacker went the wrong way,” Willert said. “When we blitzed to the outside, we were supposed to have a linebacker fill there. You can’t make mistakes when you’ve got somebody like Carney there. That might have been one of the only mistakes we really made all night.”

“I saw the safety was blitzing and he just overshot his blitz and they had nobody in that area,” Carney said.

The euphoria from the early fireworks was short-lived. That was a pattern. East answered Carney’s long dash in four minutes, two seconds. After Davie’s second TD, East scored on the ensuing kickoff. After Davie’s final TD, East responded with points in 43 seconds.

In the first quarter, East racked up three TDs in a span of 7:23. Yikes. It was quite a bounce back from a 22-18 loss to Reagan the week before.

“We changed our practices and played with more emotion,” Willert said. “Sometimes you learn a lot more from losing than winning.”

After watching the Eagles storm to a 21-7 lead, a big defensive play and a 43-yard drive revived hope for the War Eagles. East quarterback Jaylen Raynor tried a screen pass, but lineman Silas Fuller intercepted at the Davie 45 and returned it 12 yards. On fourth-and-7 from the East 40, an Alex Summers deep ball looked like an overthrow. But Zymere Hudson made a miraculous catch that had to be seen to be believed. He laid out and reeled in a 29-yarder with one hand. Three plays later, Summers and Za’Haree Maddox connected for a 12-yard TD that sliced East’s lead to 21-14 with 7:56 remaining in the first half.

“That was a heck of an effort,” Davie coach Tim Devericks said of Hudson. “Alex was getting pressured up the middle and he throws it up, trusting Zy.”

The War Eagles were back in the game, but they fell to pieces the moment Jemon Smith took the ensuing kickoff. He went 88 yards to push the margin back to two scores. In the second quarter, East scored three times in a span of 6:54 to put Davie in a deep halftime hole, 38-14. It was the most points Davie’s allowed in a first half in 65 games (38-14 deficit at North Davidson in 2015).

The War Eagles tried to fight back early in the third. Raynor threw a lateral, Davie’s Mason Shermer scooped up the loose ball and returned it 14 yards to the East 49. Summers converted a fourth-and-8 with a 12-yard completion to Hudson, followed immediately by a 15-yard reception by Maddox. Then Summers pump faked before going over the top to Hudson for a 16-yard TD that closed the gap to 38-21.

The 17-point deficit lasted 43 seconds as Traylon Ingram broke a 69-yard TD run up the middle. From there, East just kept ripping through Davie’s defense for one first down after another.

The Eagles look like a team with no ceiling. They have explosive weapons everywhere on offense. Ingram (seven carries, 106 yards), Je’mon Smith (10-88), Jaquan Porter (9-70), Raynor (10-53) and Li’jaye Fisher (3-34) took turns victimizing Davie on the ground. East was equally efficient through the air as Raynor completed 14 passes for 276 yards.

“They have a bunch of weapons,” Devericks said. “It’s kind of like triple option football. You better read your keys and play your responsibilities. Because if you guess or you think somebody is getting the ball, it doesn’t work out with these guys.”

“At the end of the day, it comes down to two things: blocking and tackling,” Devericks said. “We weren’t very good at either one of those tonight and they were super.”

Willert said the key to the game for East was getting pressure on Summers, who had helped Davie score 56, 42, 51 and 73 points in the 4-0 start. The last team to hold Dave under 36 was East last spring.

“Our defensive coaches did a great job,” Willert said. “(Summers) is too good of a player … If you let him sit in that pocket, he will pick you apart – and that’s what he’s been doing to everybody. We wanted to get the ball out of his hands as fast as we could. The defensive coaches put a great plan together.”

As dreadful as the night was, there were positive moments. Carney and Markel Summers rushed for 123 and 77 yards, respectively.  Summers completed 25 of 39 passes without an interception. Although his 231 yards were a season low, he threw multiple TDs for the sixth game in a row. Maddox had 13 catches for 81 yards and Hudson had five for 79.

It’s not like the War Eagles couldn’t move the ball. They managed 19 first downs and 409 yards. (However, they went 4 of 13 on third down.) They didn’t lose by 38 because they quit trying.

“I told them to not worry about the scoreboard and continue to play hard,” Devericks said. “No one in black jerseys quit tonight. I told them: ‘You flew around and gave it all you had.’ We can work with that.”

Instead of folding up with the score 52-21, Davie put together a 15-play drive from its 20 to the East 26, where the series ended with a fourth-down incompletion.

“It was nice to see that nobody gave up toward the end of the game,” Carney said. “It would have been easy to, but all the guys stuck it out and finished the game. That was a big positive.”

It was a bittersweet night for Carney, who not only broke the record for career TDs but also surged from third to second in career rushing yards. Arnold is first with 5,236, T. Carney stands at 3,834 and older brother Cade Carney is now third with 3,815 from 2012-14.

“I want to thank God for all of it because without Him I would have none of it,” Carney said. “And I want to thank everyone on the team. All four years I’ve had great o-lines and they’ve allowed me to excel.”

Devericks marveled at one of the all-time greats.

“I was around and watched what Cooter Arnold was able to do on the field,” he said. “To have somebody come along and break that record is a phenomenal feat. Tate’s gotten a lot of tough yards and he’s worked really, really hard to improve himself. Tonight he knew the game might be out of reach, but I could hear him over the headset. He wasn’t standing next to me; I could hear him through the headset encouraging his teammates. That’s just the kind of kid he is. Obviously, he would have liked the W instead of the record, but when we look back 20 years from now when Tate Carney and Cooter Arnold are mentioned in the same sentence, that’s phenomenal.”

Only one guy has caught more passes in a game than Maddox did against East. Jack Reynolds had 15 receptions in a 37-34 win over West Forsyth in 2019. Maddox is alone in second with 13.

Davie’s imposing slate has just begun. Going into last Friday, five teams in the hyper-competitive CPC were ranked in the top 14 in the 4-A West by MaxPreps, including East at No. 11 and Davie at No. 13.

Davie’s opponent Friday night at 7 in Pfafftown, Reagan, rallied for a 22-18 win over East before getting manhandled by Glenn, 33-7.

Davie outlasted Reagan in wild, high-scoring affairs the past two seasons, winning 49-42 in 2019 and 49-40 last spring. The War Eagles lead the all-time series 8-4.