Clerk retiring after 36 years at the courthouse 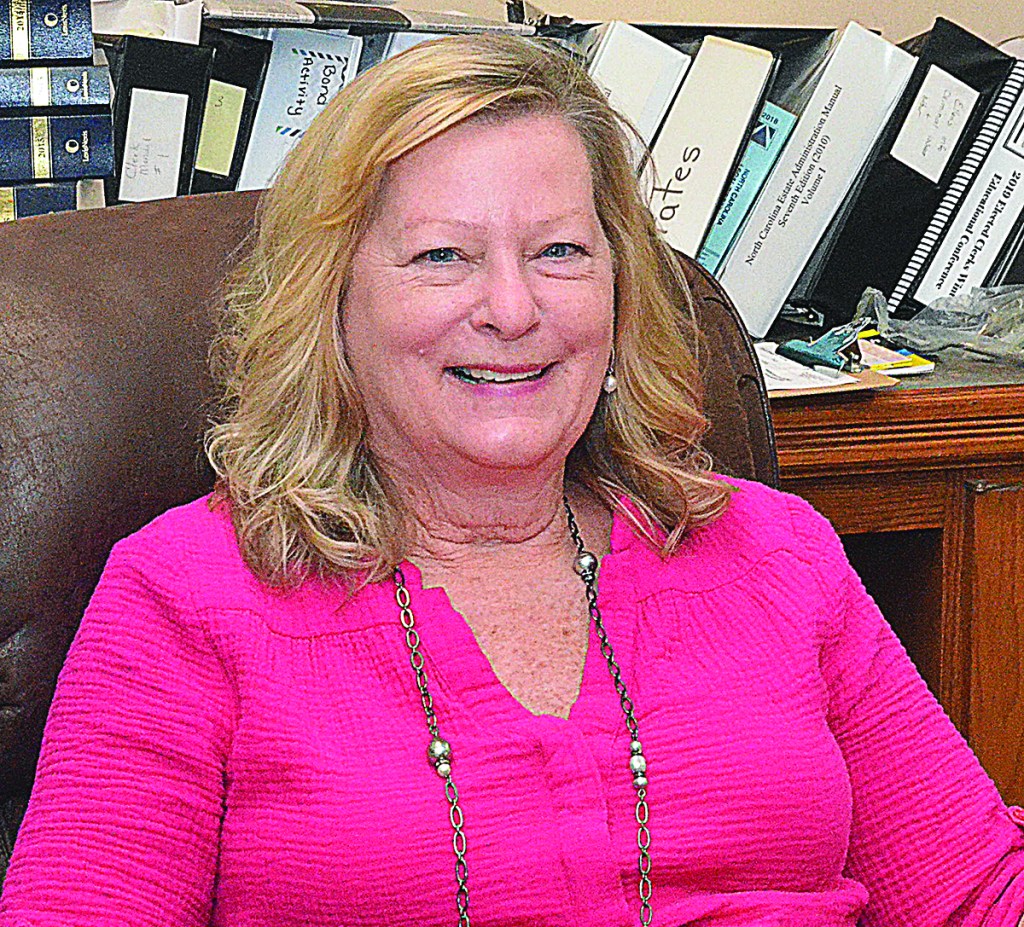 If Ellen Drechsler has hopes of fitting all the names of all the friends she’s made during her tenure as clerk of court onto the rocking chair she was given for her service, she’s going to need a much bigger chair.

Drechsler has been a fixture at the courthouse for 36 years, first as deputy clerk for Delores Jordan in 1990, later as magistrate from 1997 to 2010, and most recently as clerk.

She began her career as elected clerk on Dec. 1, 2010 to serve the remainder of former clerk Ken Boger’s term. She was sworn in again five days later to begin her four-year term and has been elected three times as Davie County’s Clerk of Court (COC), most recently in 2018.

Drechsler grew up in Forsyth County, graduated from Parkland High School and ECU and worked at a state mental health facility in Goldsboro. She met her husband, Paul, on a blind date and they married in 1988.

During her tenure, their two sons, Abe, 31, and Zach, 29, have grown up and have their own careers. Drechsler is a grandmother to 2-year-old Eloise, and a grandson is expected in November. In March, she will welcome a new daughter-in-law to the family when Zach marries.

“I also plan to read a book,” she said, “one that does not contain General Statutes. Although I imagine I will continue to multitask as needed, I hope to not be doing it all day long anymore. As my dear mother used to say when we’d ask what she wanted for her birthday or a holiday, I just want ‘a little peace and quiet.’”

While Drechsler has experienced many personal changes during her tenure, there are just as many professional ones.

The courthouse emerged somewhat from the dark ages in the past few decades. When Drechsler began, there was one shared computer in the clerk’s office. Now, everyone has their own computer, and Drechsler was able to establish a data base so she could easily notify courthouse staff and attorneys when there were adverse weather conditions or other issues such as Covid, that altered the normal courthouse schedule.

She was also able to persuade the county to purchase new chairs and matching desks.

“I don’t think we’d ever had matching desks or even new desks or chairs. We’d get leftovers. It seems there should be a lifespan for desk chairs, where they’d get replaced every so often, since they are used eight-plus hours a day for the most part,” she said.

One of Drechsler’s greatest accomplishments, she said, was for public safety.

“I learned there were no working fire alarms on the third floor of the courthouse. That was a pretty significant potential problem and I’m glad nothing bad happened before it could be corrected,” she said. “Across the state, many clerks’ offices are working in historic buildings that were not built for today’s times. The majority of this courthouse’s occupants are state employees, not county employees, which makes our relationship with the county similar to a landlord-tenant relationship. A portion of each court cost goes to the county to partially pay for our use of a building. The county has to provide us with a space, but they can also decide where the space is located.

“The current courthouse will continue to have issues with accessibility (the jury room is not handicapped accessible) and security due to the layout of the building. Even before I broke my leg years ago, I knew the building wasn’t easily accessible, but I really understood that after I broke my leg.

“There are plans to remodel the courthouse at some point, but I don’t understand some of the ways money has been spent here, such as keypads at the bathrooms. I’m grateful we’ve had such an amazing maintenance staff, which we’ve really needed, such as the time water was pouring down the steps from the third floor courtroom.

“We don’t have the luxury of a breakroom or an ice machine, but over the years, we have learned to adapt to what we are given. When the county removed the video equipment we use to do first appearances, I had to figure out another way, which just happens to be a tube TV,” she said.

Technologically speaking, the pandemic has forced not only those in the Davie courthouse but in all courthouses that experienced closures to learn how to operate remotely.

Although some of the computer programs are the same as were used in 1990, which causes more work for the clerks, the ability to conduct hearings remotely by Webex came about as a result of the pandemic.

“All the courthouses have had to think in new ways to be able to operate during this time,” Drechsler said.

There are 10 staff members and Drechsler, whose duties include serving as judge in estates, guardianships and special proceedings such as adoptions, which Drechsler said is one of her favorite parts of her job.

“The COC manages and supervises clerk staff, and most people understand that we are the record keepers as we have files and information as far back as the late 1800s. In a small office such as ours, the staff have to know a little about many different areas. The hardest thing about that is there are so many filings that happen not very often, so you don’t have practice handling them, but it still has to be done. Luckily, we have resources in the shape of other clerks’ offices that we can turn to when we need help.”

The COC is an elected position to four-year terms. Drechsler’s recent term began in 2018 and would expire in 2022.

“The Resident Superior Court Judge will appoint someone to fill my unexpired term. I had no plans to retire before the end of my term when I ran in 2018, but things have changed, life changes. No one knew we’d go through not one but two rounds of Covid, and I had no idea I would have one grandchild, much less two, who would live out of state,” she said. “I want the time to enjoy my family and my grandchildren.”

Being in the end days of her working career have given Drechsler time to reflect on the past three decades. There were sad times, such as when she lost a co-worker, Ann Frye, to cancer in 1998, and happier times that she still laughs about.

“My most memorable experience, because it was so different, was working with Jane McAllister, retired librarian, and the Discover Channel. The show Mystery at the Museum wanted to do a story about the James Chaffin will. We had to get a contract drawn up so that I could transport the will to the Davie County Library, right down the street, for the show to film the will. The episode aired and we had a viewing party that night.

“When I think about what I will miss, the thing I will miss most is helping people. Everything I have ever done as an occupation has been in a helping field; Cherry Hospital, Forsyth-Stokes mental health, or the Ronald McDonald house. Every single piece of paper that comes into this office has an effect on someone. I will miss knowing that maybe I made a difficult situation a little easier for someone.”

Drechsler isn’t the only one thinking about what it will be like around the courthouse when she is gone.

Clerk Cindy Harris, who has known Drechsler for decades, said, “The office won’t be the same without her. Ellen will be missed but she has definitely earned her retirement.”

Harris will be interim clerk until next year’s election.

Judge Carlos Jane’ said: “Ellen just cares about Davie County, plain and simple. We would talk many times, first when I was a lawyer and later as a judge, and she was always trying to improve the process to better serve the public. She consistently led by example and has a wonderful team in place to continue her legacy.”

When she reached the 30-year mark as a state employee, Drechsler was given a wooden rocking chair that has been sitting in her office for the past six years.

When she reached her 35th year, the gift choices weren’t anything she thought she could use, so she asked if she might be given another rocking chair, picturing she and Paul rocking the grandbabies in them, side by side. The newest one had already gone home, but she left the 30-year one in her office and asked folks to sign it as a reminder of the friendships she’d created during her time caring for her staff and many residents in and around Davie County.