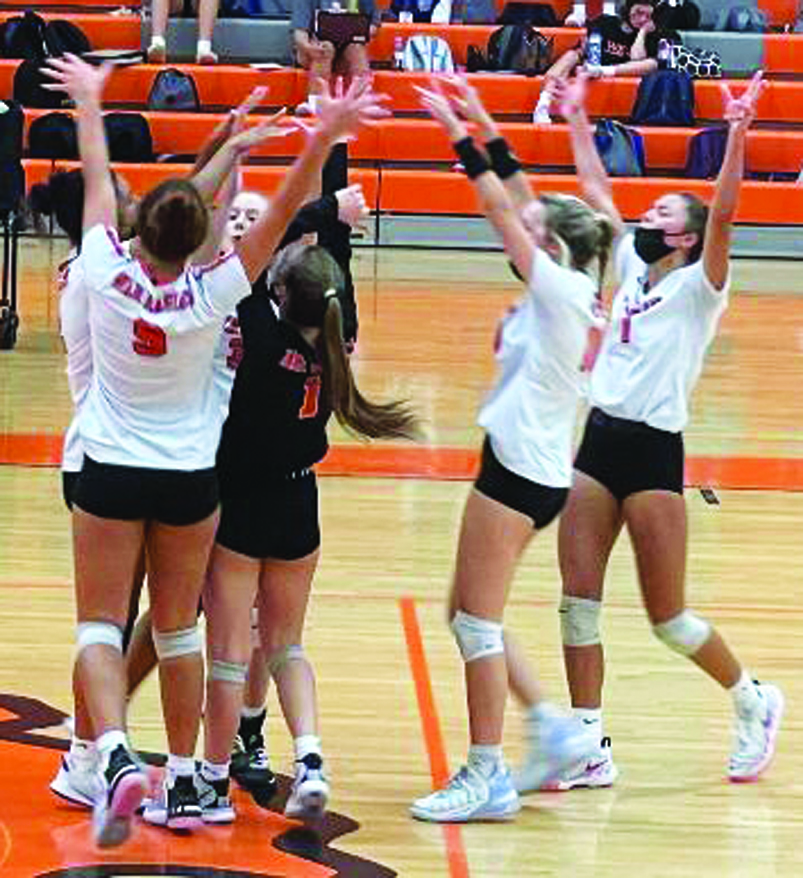 The Davie volleyball team’s showing at Reagan on Sept. 7 tasted like a fortune cookie. Davie dropped two sets that went down to the wire and went home with a 3-0 loss.

At that moment, everyone was chasing Reagan. But things changed two days later. West Forsyth upset CPC juggernaut Reagan in five sets, which was exactly what Davie needed.

And then the War Eagles played with a vengeance against visiting West on Sept. 14. After winning 25-18, 25-18, 25-16, they were in full dance mode, displaying no shortage of reasons why they can’t be the ones who emerge with the trophy at the end of the regular season. After Davie beat the Titans for the third time in a row – all three have been in three sets – the CPC standings saw Davie, Reagan and West tied for first with one loss each.

“We were very, very frustrated when we left Reagan,” coach Amber Brandon said. “When I looked at film, I felt like one kid (Ali Angell) on our team played close to their potential.”

While the War Eagles were not in sync against Reagan, they played flawlessly against West (7-4).

“(West’s win over Reagan) gave us fresh life,” Brandon said. “We knew if we took care of business, we would tie everything back up.

“West has an all-star in Clara LaRue. East Forsyth has an all-star in Kadynce Boothe. Reagan has a middle, Riley Tucker, that is phenomenal. I have some great players, but our team is not built for one all-star. I don’t have one hitter that every time they touch the ball, the ball’s going to the floor. We’re solid and can beat you in a lot of different ways.”

While Angell continued her stellar play against West, Aimee Loj turned in a vintage performance.

“Ali is playing phenomenal right now,” she said. “Aimee probably had the game of her life. She was unstoppable blocking. She had some huge blocks on LaRue early that changed the style she plays. I know Aimee hit over .500. Her hitting percentage had to be through the roof. Aimee has a great serve. At the high school level, when the middle serves most of the time they can’t play defense. Aimee is a phenomenal defensive player on first contact. We really don’t lack that much when she’s playing defense. In the third set, she had two or three defensive plays that most middles don’t make.”

Brandon marveled at the unselfishness and leadership of Emily Garner, whose role changed when Abigail Reynolds missed two matches with an ankle injury. Her role changed again with Reynolds slowly working her way back to 100 percent.

“Emily’s role has been fluid throughout several injuries,” Brandon said. “She’s a kid I can’t brag on enough. She plays her heart out every point, and she expects her teammates to play like that, too. Even though her role is changing again, she’s excited that Abby is getting back healthy and we’re getting back to our normal lineup. She had digs at crucial times (against West).”

Notes: Brandon said Reynolds played at 50 percent against Reagan and between 70-80 percent against West. “She’s still not playing six rotations,” she said. “She’s playing across the front right now.” … Brandon’s record against West is 12-3. … As expected, Davie pounded visiting Parkland 25-7, 25-5, 25-1 on Sept. 16. That lifted Davie to 10-2 overall and 5-1 in the league. … The Davie JV lost the first set but rallied to beat the Titans. It has records of 6-2, 4-1 despite a rash of injuries, including one to libero Taylor Smith. “We have not had a consistent lineup,” Brandon said. “Our libero is out with a knee injury. That has been a huge loss. Another kid is out with a concussion.”