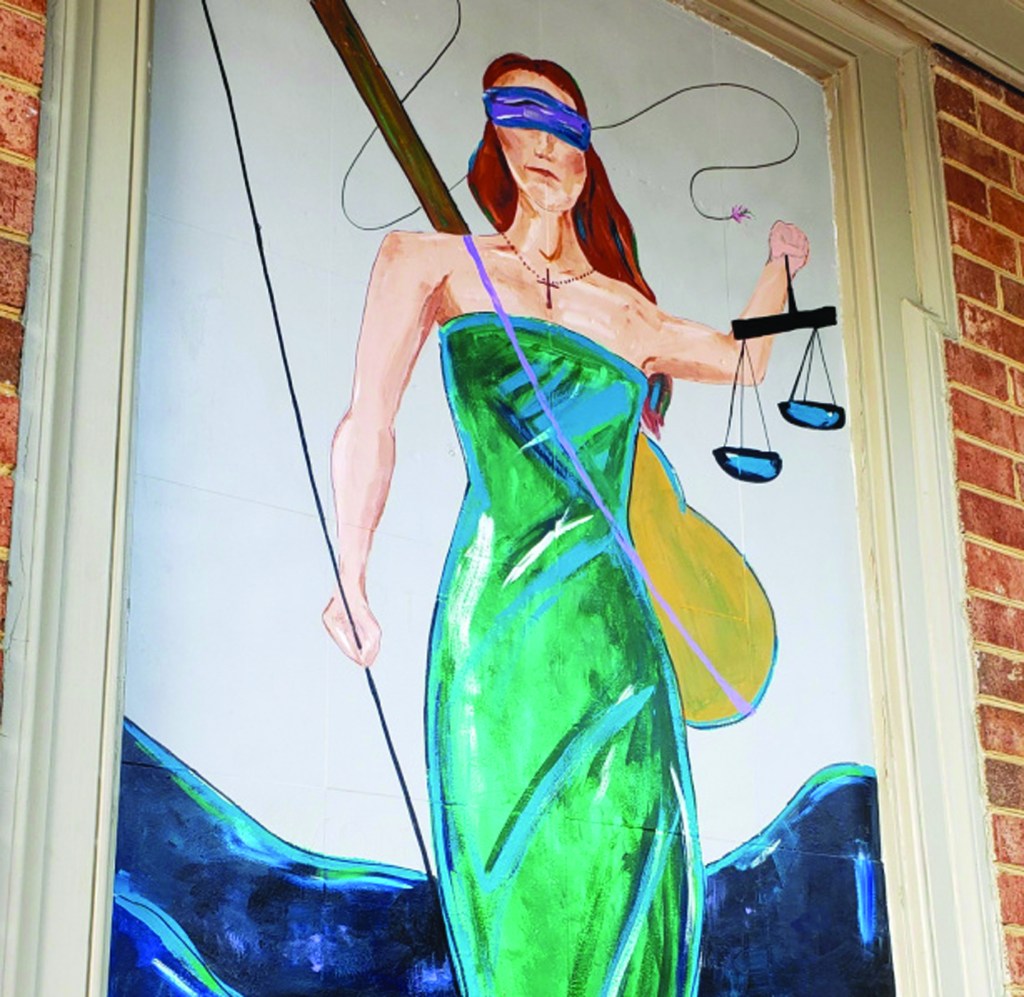 Although many would say they enjoy reflecting on pieces of artwork, few people find themselves at an art exhibition or gallery to do so.

In Downtown Mocksville, the artwork makes its way to you. Murals and art around town evoke thoughts and feelings of home for those who take the time to give them more than just a glance passing by.

If you’ve ever taken a drive down East Depot Street, or a walk down Main, it is impossible to miss “The Running Of The Horses,” a historic piece with a bright color palette.

The piece harkens back to the days of World War II, when gasoline was hard to come by, and farmers would rely on horses for pulling farm equipment.

In 2020, William Richardson, son of the blacksmith, recalled the events the piece was inspired by: “During the war years… you couldn’t get gasoline to run tractors… so they used horses on the farms. They would unload them at the depot, run them right up East Depot Street, across Main Street on the square, and down to where Junker’s Mill is.” The horses in the piece are galloping down Depot in the same fashion, and are a reminder of Mocksville’s roots in farming and simple hardworking lifestyle.

The center oak tree in the piece is a nod to the original four oak trees that were in town square for more 90 years. The tree also symbolizes the town itself, with its roots in unity and its limbs reaching out. The roots of the tree serve as the foundation, as unity does with the community. The limbs reach out, symbolizing the growth of the town, and the positive impact its members make. Mother Earth faces both directions as the sun rises in the east and sets in the west, which brings about the energy and life of Mocksville.

A vibrant vintage piece can be seen on Main Street should you be coming from the Brock. The Horn Oil and Royal Republic gasoline advertisement is a classic piece that captures the essence of the early 20th century.

The Horn Oil headquarters has been located in Mocksville since 1932, and this local business still lives on, partnered with Quality Oil since 2012. The main office is still located at 190 North Main, and fans of classic American designs and early 20th century art are sure to love this retro advertisement.

Venture down Water Street and find the back side of the Bomar Law Firm facing the First Presbyterian Church to catch a good look at a mermaid in the window. This artwork depicts a figure similar to Lady Justice, a symbol of a fair judicial system that does not discriminate. Her depiction dates back to ancient Greece, more than 2,000 years ago. In this rendition, the Mermaid of Justice is holding the scales, as well as a fishing pole in place of a sword. She is wearing her signature blindfold as well, representing blind justice within the court.

Some art downtown requires a bit more work to seek out, but the effort is worth it. On the backside of The Station’s brick wall, a postcard is a colorful welcoming piece that encompasses the landmarks and warm feelings across town. The inspiration came from an old postcard that The Station’s owner, Suzanne Lakey’s mom, Kathy Miller, found in the Davie County Public Library’s online archives while searching for old photos of the building to use as part of The Station’s decor. By merging the past and the present, Lakey hopes the mural will appeal to the older generation as well as the newer “selfie” generation.

“For me, the goal of the mural was the same as that of The Station, to continue bringing people downtown and keeping the environment lively,” said Lakey.

“I have embraced this idea that flying pigs represent how anything is possible,” said Addison, who has an extensive collection of flying pigs in his office. Artist Bruce White made sure to give the flying pig some local flavor, in classic orange and white.

“I really have been advocating for this in conversations I have with people… we have recently had Wade Leonard put one on his building, and Chad Bomar as well… I think these [murals] are a positive reflection for downtown, and they make things more interesting,” said Addison.

The most recent mural downtown is o at the office of Attorney Wade H. Leonard. This historic piece was painted by Todd Donahue from Imagination Works, and is composed of elements from Mocksville’s past. From one of Daniel Boone’s homes, to honoring the soldiers who gave their lives, it’s art full of detail that is best taken in up close.

Downtown Mocksville’s urban artwork is sure to catch the attention of those passing through and residents alike. Some pieces are bold and obvious, while others are more elusive.

The next time you find yourself downtown, don’t hesitate to reflect and take in the detail of the art gallery that is embedded on the walls of Mocksville.