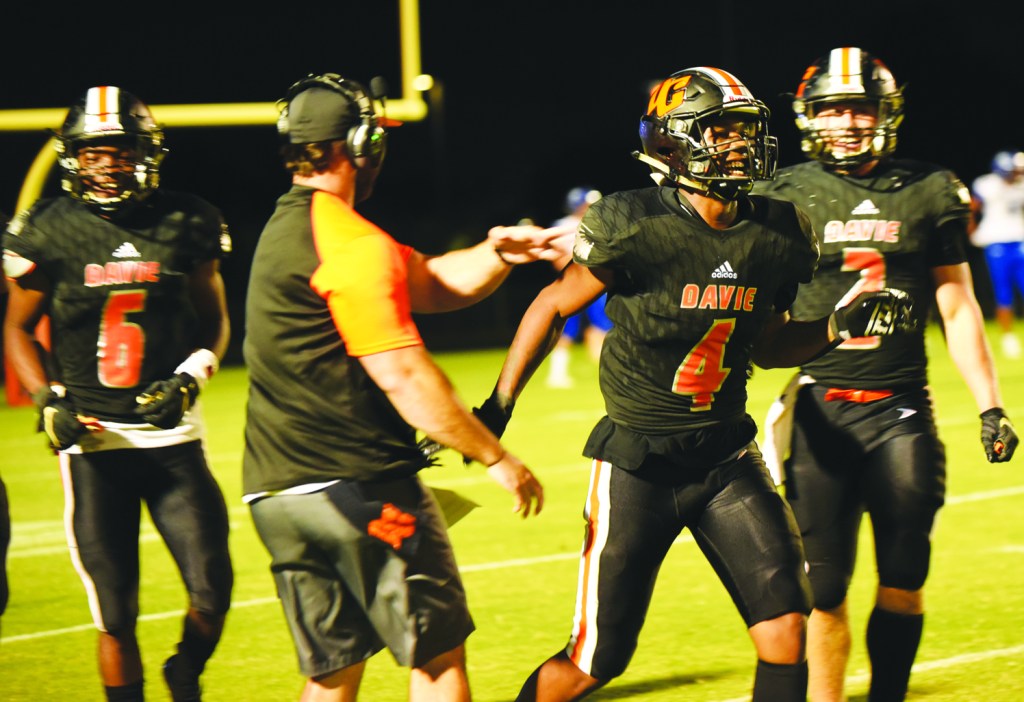 Through about 10 minutes of Friday’s Central Piedmont Conference opener at Reynolds, the Davie football team was in a fight. The Demons were dinking and dunking their way down the field with a pass-every-play offense and going blow-for-blow with the War Eagles.

But there was no keeping up with the War Eagles and their raging offense. They shrugged off Reynolds’ 14-13 lead, scored 40 unanswered points and lit up the hosts to the tune of 594 yards and 73 points.

“The execution was really high,” coach Tim Devericks said after the 73-28 victory, a record-setting performance for points in a game. “I challenged them at the beginning of the game to execute to our standard, and I think we did that.”

While Reynolds sank to 1-3 overall, Davie opened 4-0 for the second year in a row.

The War Eagles put together another offensive exhibition right from the start. They covered 62 yards in six plays to take a 7-0 lead. On Reynolds’ third play from scrimmage, cornerback Willie Purvis tipped a pass and linebacker Justin Hayes snagged the deflection for Davie’s first interception of the season. But two plays later, Davie quarterback Alex Summers threw his first pick on his 79th pass attempt of the season.

Reynolds QB Duke Ferree went to the air seven times during an eight-play, 62-yard drive, the exception a QB draw that gained 31 yards. The drive ended with a 5-yard TD pass that tied the game at 7.

Davie answered by driving 70 yards. Summers threw short to Zymere Hudson, who used a Za’Haree Maddox block to score a 15-yard TD. A bad snap on the extra point left Davie’s lead at 13-7.

Less than two minutes later, Kenaz McMillian got behind the Davie secondary and caught a 59-yard TD as Reynolds took the 14-13 lead with 2:07 left in the first quarter. Twenty of Reynolds’ first 21 plays were passes.

“I told them all week: ‘Guys, this is the CPC. You can’t take anything for granted. It’s going to be a dogfight every week. Just keep playing,’” Devericks said. “They came out in something that we never imagined them coming out in. They went empty and tried to throw it all over the yard. They’ve got a great running back (in junior Elijah Phelps); he must be dinged up because he didn’t play tonight. We had to adjust to that and get our coverages right.”

Although they were facing their first deficit of the season, the War Eagles didn’t need long to end Reynolds’ upset hopes. They moved 51 yards in three plays, scoring on a deep ball to Hudson, who jumped and high-pointed the ball in the end zone to give Davie a 20-14 lead.

The War Eagles’ next possession saw them navigate 89 yards. The TD was a short pass to Maddox, who danced in from 14 yards out.

Less than two minutes later, safety Coy James, the fabulous freshman and the team’s leading tackler, took an interception to the house. The pick-6 was sealed by freshman Landon King’s block at the Reynolds 10. Just like that, Coy is six picks from matching his father Matt James’ varsity total from 1996-97.

“Coy dropped to a zone and made a good play on the ball,” Devericks said. “Then his natural athleticism took over.”

Logan Yokley and Andrew Shuler had minus-5 tackles before Davie’s next offensive score, a pass in the flat to Maddox, who juked three defenders on a 29-yard catch-and-run. That made the halftime margin 41-14.

Whether through the air or on the ground, the War Eagles moved the ball at will, scoring on five of six possessions. Tate Carney ran for 123 first-half yards and Summers had four TD passes at intermission.

The onslaught resumed in the third quarter. Defensive tackle Matty Warner whacked the quarterback for a 4-yard loss on the first play of the third. On the next play, Reynolds completed a pass but only gained a yard as Purvis and Hayes swarmed receiver Isaiah Lytton.

Midway through the third, Summers completed a bomb down the sideline to Brodie Smith for a 51-yard TD. Less than four minutes later, junior kicker Palmer Williams made a little bit of history by booming a 47-yard field goal, three yards shy of David Wooldridge’s record from 2000. It was just the 11th time a Davie kicker has converted from 47-plus yards.

“He knew we were close enough and he was standing right by me,” Devericks said. “When I said, ‘field goal,’ he was all jacked up. One of the cool things about that, his brother Spencer was probably more excited for Palmer than Palmer was. It was awesome.”

Carney only carried the ball twice in the second half. In the fourth quarter, Carney and A. Summers stayed on the sideline as Markel Summers and Ty Miller took over at running back and QB, respectively. The explosive plays just kept coming. Receiver Aidan Froelich set the edge as Miller scored around left end.

On Davie’s next possession, Froelich goes 70 yards with a rainbow throw from Miller if he doesn’t lose his balance. He settled for 44 yards. M. Summers took care of the remaining 26 yards on the next play to culminate a five-play, 91-yard drive.

Davie’s defense closed the scoring with its third INT of the night. A low snap disrupted the play’s timing, and the QB immediately found himself in all kinds of trouble. He backpedaled to the shadow of the Reynolds end zone and threw the ball as he was getting slammed to the turf by Gavin Taylor. John Stokes caught the gift and walked in with a 5-yard pick-6.

It was more of the same from A. Summers. Before the season, a Davie QB had tossed five TDs in a game once in 66 years; A. Summers has done it twice in two weeks. He went 15 of 20 for 232 yards and rose from tied for fifth to fourth in career TDs with 32.

There was no shortage of offensive stars. M. Summers rumbled for 138 yards, and Miller hit 3 of 4 passes for 63 yards.

“What I like the best, when Markel and Ty went in, Tate and Alex were so excited for those guys,” Devericks said. “Tate spends time with Markel, working on the fine-tuning of things. We ask Markel to do a bunch and I love the way he’s progressing.”

Smith was second with 74 receiving yards, and A. Summers has a dangerous under-the-radar option in Froelich, who has averaged 28.2 yards on his four grabs for the season.

“Those guys compete against each other, push each other, and it makes that whole group really special,” Devericks said.

Defensively, James had two pass breakups to go with his pick-6 and nine team-high tackles.

“They ran a ringo play on the sideline, and Coy was step for step with the guy and used his left hand to knock it down,” Devericks said.

Hayes and Warner had seven tackles each, while Yokley and Silas Fuller had six each. Shuler continued to impress with three tackles for loss. Warner filled in for injured JT Bumgarner and took advantage of his opportunity for major minutes.

“Matty is an exciting kid,” Devericks said of the sophomore. “He brings a lot of energy and effort on every play. He always wants to know: ‘Hey, how am I doing?’”

Notes: Yourtriadsports.com did a live audio broadcast, and folks can listen later at their convenience on its showreel through Mixlr. … The 73 points broke the record from 1997, when Davie crushed North Wilkes 71-0. … It was deja vu for the Demons, who watched Davie score 63 and 62 points in the previous two matchups. … Davie’s offense averaged 9.7 yards per play, had 299 rushing yards, 295 passing yards and scored on nine of 11 possessions. And get this: The longest TD drive was two minutes, 51 seconds. … With Hayes snapping in place of Bumgarner and James holding, P. Williams’ FG was the longest since Jared Griggs’ 48-yarder in 2016. … The offensive line welcomed back S. Williams at left tackle after he missed the Mooresville game. With Brysen Godbey/Brandon Logan at left guard, Charlie Williams at center, Ethan Doub at right guard and Evan Froelich at right tackle, Davie only faced third down six times, converting four. “Spencer brings a calmness to the OL unit,” Devericks said.

The War Eagles have a major test Friday at home against East Forsyth at 7 p.m. East has been a nemesis for a while, winning five straight meetings and nine of 11 all-time.

“The last three times we’ve played them, we’ve been neck and neck for a little bit,” Devericks said. “The ball hasn’t bounced our way. We’ve got to take care of the ball, force a few turnovers and be dominant in special teams.”