Officers getting to know folks in Mocksville 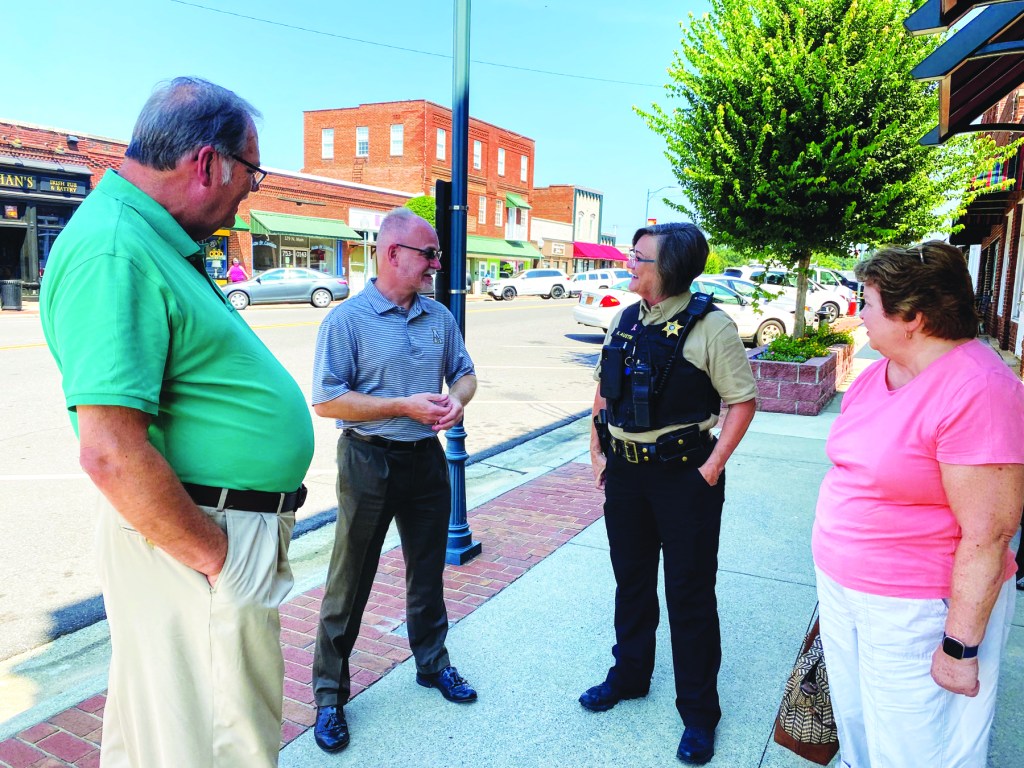 As the downtown foot patrol officer, much of her shift is spent meeting and greeting residents, checking on business owners, and showing children that law enforcement officers are friends.

“Karen’s special skillset is the ability to interact with people,” said sheriff’s Lt. Bob Dewitt. “She has never met a stranger, which works well with our community policing initiative.”

Even though he spends most of his day patrolling by car, DeWitt keeps his windows open so that he can talk to the people he meets, and he’s educated other patrol officers to do the same.

“We talk to people so that hopefully our first contact isn’t necessarily a professional contact, it’s a personal one. That means so more in the world today.”

It was their passion for people that compelled the two veteran officers to come out of retirement in May to begin patrolling downtown Mocksville as part of the law enforcement coverage contract between the town and the sheriff’s office. Two zoned cars also patrol the town, one on the north side and the other on the south side. Together they manage traffic enforcement and answer calls.

After 26 years in law enforcement, 20 with the Forsyth County Sheriff’s Office, and six with the Davie County Sheriff’s Office, Austin retired to take care of her grandchildren. She was blessed to spend five years at home with them, but once COVID hit, and the children began virtual schooling and their mothers began working from home, she considered freezing her retirement and going back to work.

When she reached out to Sheriff J.D. Hartman, who told her he had a job that would allow her to walk around Mocksville and talk to people, she jumped at the chance.

Dewitt has 43 years of law enforcement experience: 10 years in the Army’s military police corps; 20 years, 11 active and 9 reserves, with the Union County Sheriff’s Department where he served as a patrol officer, detective, vice/narcotics officer, sniper team leader, and was trained in community-based policing; and 13 years with the Davie sheriff’s office were he served as a patrol officer working as the animal cruelty investigator and retired as the director of animal services on Jan. 1, 2020.

When the Mocksville Police Department was dissolved, DeWitt contacted Sheriff J.D. Hartman and offered interim assistance based on his previous experience.

“We were very blessed to have Bob and Karen return to us from retirement,” said Sheriff JD Hartman. “They are both great officers who do a wonderful job and will prove to be great resources for our community many times over.”

During her rounds, Austin enjoys the variety of interactions. Sometimes it’s chatting with merchants. Other times it’s handing out stickers to children and grabbing ice cream with them at Scoops or giving a veteran a wooden coin that thanks them for their service.

She tries to spend money with the shops as well. (The sparkly purple mask she wore to this interview is from Artist Market on Main.) “I go to them all and try to be a good citizen of the community supporting the businesses and restaurants.”

DeWitt considers building positive relationships with children to be particularly important. “We want them to trust us, not be afraid of us.”

He recounted a time when he was making his rounds at one of the apartment complexes, and a resident came up to him and asked him to speak to her three children who were terrified of the police.

“I said yes, absolutely. At first, the kids were really hesitant. We started to talk, and several other kids gathered around at the same time. The resident’s son asked me, ‘how do you catch bad people?’ I told him that we used information, and then it dawned on me that rather than explain it, why didn’t I let them sit in the front seat of the car and let them look at everything. I turned on the rear camera and the kids enjoyed standing behind the car and making faces. It went on until every child in the apartment complex had a chance to sit in the car.”

Recognizing the value of the experience, DeWitt decided to go a step further and worked with Mocksville Fire Department Chief Frank Carter to get first responders and a fire truck to the apartment complex.

“Typically, children won’t see a fire truck personally until it is a crisis. It is more fun when you see it on a good note and have a personal interaction with the department.”

He invited Austin to join them, and she showed up with a trunk full of stuffed animals. Each child got to choose a dog, cat, or bunny after visiting the fire truck and the patrol car.

“It was a good interaction with the community,” said Austin. “I think the parents had just as much fun as the children.”

Another parent asked for a class to teach the children what to do if they can’t get out of the building in case of fire, so he and Carter will begin teaching safety classes at the apartment complexes this fall.

Both officers are developing a youthful following.

“I try to remember kids’ names, which is so hard to do because there are so many,  but you make those connections, and it’s so much easier,” said DeWitt.  “Sometimes, I go to the apartment complexes just to sit and hang out. Now it’s not uncommon to be sitting in the WalMart parking lot watching traffic and have a child drag their mom over to the patrol car because they want to say ‘hi.’”

Austin talked about a child who approached her while she was volunteering at Rescue House Church. The little girl shyly told her, “I like polices.” When the grandmother shared that the child had bad experiences with the police in the past, it broke her heart. “I hugged her and told her that police are like your parents, ‘we just want to protect you and make sure you are okay’.”

“Our best asset is our ability to communicate. It’s better than any equipment we carry,” said Austin. “When you know the people by their first name, and when you are walking down the sidewalk and they step out of their business and call your name, you feel like you’ve arrived.”

Hartman is pleased with the way things are going.

“The sheriff’s office will continue to support our community in all of Davie County. These first two months of our services in Mocksville have gone well and we continue to learn when and where things happen in the city limits so that we can direct resources to where they will do the most good in the community.”

The sheriff’s office is at 132 Government Center Drive, Mocksville, and can be reached at 336-751-6238. Email Hartman at Sheriff@dcsonc.com. The office desires community input and feedback, he said.