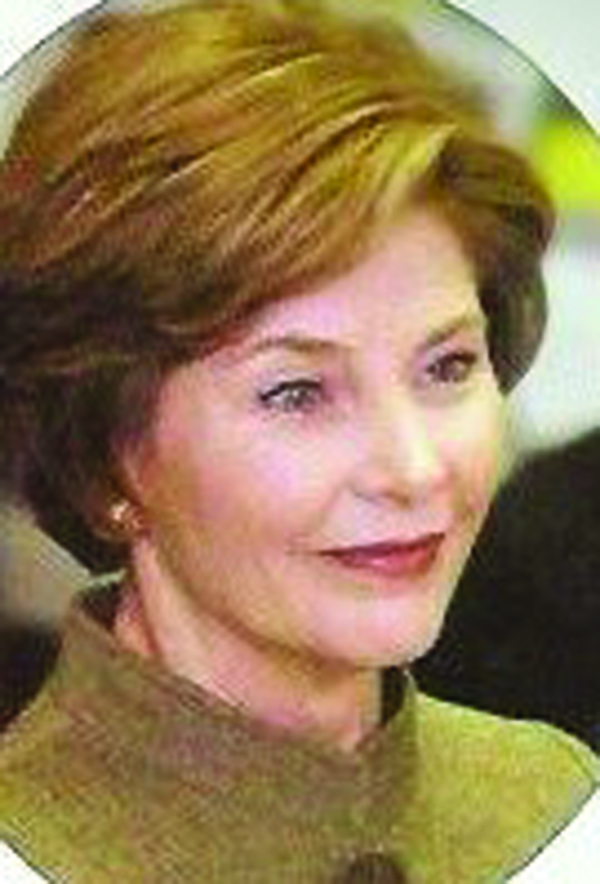 Laura Welch Bush, the wife of the 43rd President of the United States, George W. Bush, finished her autobiography in 2010.  Laura’s book, titled “Spoken from the Heart,” is outstanding. The author shares the good and the bad that she encountered in her life in an interesting way.  It is a great read for those interested in people and in modern history.

Midland, Texas is a hot, dry, windy town in west Texas, near oil fields.  When the wind is blowing in just the right direction the odor of oil can be detected in the air. If you are in a hotel in Midland in the late afternoon, there is more evidence that you are in an area where oil is king. Suddenly, the hotel lobby will fill up with men in dusty clothes and work boots talking and laughing. If you listen a bit, you will discover that the men are talking about their successes or failures in the oil fields that day. The roustabouts and other oil field workers spend the nights during the week in the Midland hotels and then drive to their homes in other places on the weekend.

It was in the west Texas town of Midland, on Nov. 4, 1946, that a baby girl was born to Jenna Hawkins Welch, a homemaker, and Harold Welch, a builder and later a real estate developer. That baby, who was named Laura Lane would one day become First Lady of the United States. Mr. and Mrs. Welch had lost three babies before and were so happy to have a baby girl.  Laura had a happy childhood with both parents concerned about her every need.

Laura liked to sit outside with her parents and wait for it to get dark because she wanted to see the first star that would appear in the dark sky and make a wish.  Each time, she wished for a brother or a sister. That was not to be. Laura was the Welches only child. Laura spent hours reading when she did not have anyone with whom to play. Reading became her favorite hobby and remain so throughout her life.

Laura grew up and went to public school in Midland.  While in high school in Midland, she and a friend decided they wanted to go to a drive-in movie. Laura’s father gave her permission to use his Chevrolet Impala and away they went. They were traveling on a dark road when Laura realized that she was entering an intersection.  Before she could hit the brakes, there was the terrible sound of metal hitting metal. Laura’s car had hit another car and she was thrown out. She landed in the side ditch. She was not really badly hurt and neither was her girlfriend, but a boy in the other car was killed. That boy was Mike Douglas, one of Laura’s best friends. There are no words to describe Laura’s sadness and guilt. She was never charged but the guilt remained. After about a week, Laura went back to school but it was not the same and never would be.

After graduating from high school, Laura decided to go to Southern Methodist University in Dallas, Texas, which was over 300 miles from her home. At Southern Methodist, Laura studied hard and did well after she found her footing. She received a degree in education.

After graduating, Laura got a job teaching in an inner-city school in Houston.  It was there that she first encountered needy children, very needy children. The needs of those children resulted in her seeking ways to help children all of her life.

She worked hard, but, after a few years, decided that she wanted to do something different.  She went to the University of Texas at Austin and got a master’s degree in library science.  After earning that degree, she worked in a public library and a school library, but she still did not find a job that she really enjoyed.  After another move, she got a more satisfying job.

In 1977, Laura was introduced to George Bush while she was in Midland on vacation. She could not have been introduced to a person who was more different from her. Laura was a quiet, reserved lady whose favorite pastime activity was reading. George was a loud, hard-partying fellow, but, when those two met, something must have clicked.

Laura went back to Austin and George went to his family’s summer home in Maine. George’s mother, Barbara Bush, said that George spent the shortest vacation ever at the family vacation complex – only one day.  She said that George called Laura’s apartment and a man answered.  George left immediately and flew back to Texas. In September, George asked Laura to marry him.  They set Nov. 7, 1977, as their wedding date.  They were married in the First Methodist Church in Midland the day before Laura was 31 years old.  George was also 31.

Midland was once again Laura’s home.

George returned to his business in which dealt with obtaining land leases for oil prospecting. A short time later, he got interested in politics.  He ran for a seat in the U.S. House. He lost that election even though he and Laura campaigned hard. George continued to work in Midland. During this period, George, a heavy drinker, decided to give up alcohol. He was able to do that which made Laura happy.

George and Laura wanted children but to no avail. They finally decided to adopt and then they discovered that Laura was pregnant. They discovered that they were not expecting one baby but two. They were so happy. The twins were born in 1981 and returned home.  Then the reality of having two babies set in – two babies, sleepless nights, etc. but the Bushes were happy to be parents.

George sold his land lease company for a good price and the family moved to Dallas. George invested $800,000 in the Texas Rangers baseball team.  Sometime later, he was able to sell his share of the Texas Rangers and George found himself a millionaire.

That freed him up to seek office. He ran for Governor of Texas and won. Laura found herself as First Lady of Texas.  She used that position to emphasize literacy. She was quite successful.  As a part of her emphasis on reading and literacy, she planned a Texas Book Festival during which authors were invited to come and speak to the participants. The festival was a great success.

George was re-elected Governor. During his second term, he decided to run for President of the United States. He won the nomination of the Republican Party and then won a much contested election.  He was inaugurated in January of 2001. Moving to the White House was a bit easier for Laura than it had been for some of the other first ladies because she and George often visited the White House when her father-in-law, George H.W. Bush, was President. Laura knew “the lay of the land” before her big move.

After Laura Bush became to First Lady, she made issues concerning to women and children her concern. She wanted to have a National Book Festival patterned on the Texas Festival, but tragedy prevented that.

A few months after George W. Bush was sworn in as President, airplanes hit and destroyed the World Trade Center in New York, hit the Pentagon in Washington, and seemed to be heading for the White House when passengers on that airplane attacked the hijackers causing the airplane to crash. It was Sept. 11, 2001, and everything in the country changed.  We were soon at war with the countries from which the men who were the hijackers had come.

Also a hurricane hit the Gulf coast causing more damage than could be imagined.

At that point, Laura saw supporting her husband as being her most important job. That support never waivered. If she had views or opinions which were different from the President’s, she never voiced them in public. She carried out all the duties of First Lady, but priorities had changed.

Laura, who was down-to-earth and positive, received high ratings even though she was not able to do many of the things that she had hoped she could do as First Lady. She was able to make a number of trips, including some to foreign countries, to support women’s rights and to help needy children. She was warmly received every place she visited, at home and abroad.

At the end of President Bush’s second term, he and his wife were ready to return home to Texas, the state they loved. After the inauguration of Barack Obama, they boarded Air Force One, which was not called Air Force One then, for the last time. They stopped in Midland, Texas, where they were greeted by a multitude of their old friends and neighbors and then flew on to their ranch in Crawford, Texas, which is located just over 100 miles from Dallas.

Since George left office, he and Laura have spent a lot of time at the ranch.  They have also spent time at their home in Dallas as they planned and built the George W. Bush Presidential Library, which is on the campus of Southern Methodist University.

Both George and Laura have spent time writing.  George took up painting as a hobby. He has even sold some of his paintings and given the money to his library.

Laura still loves to read just as she always has. When George’s family was first getting acquainted with Laura, George’s grandmother asked Laura what she did. Laura replied, “I smoke, I read, and I admire.”  As the wife of a former President, she would probably answer the same way except for the smoking which she gave up long ago.