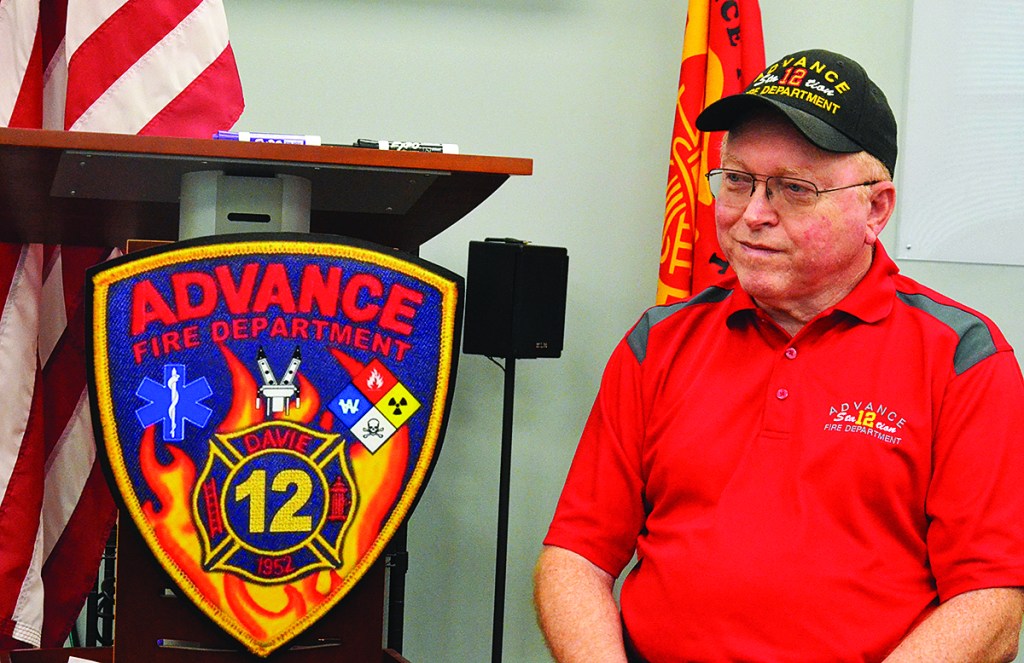 Ronnie Robertson says that educating young people about 9-11 has been one of his most rewarding experiences. _ Photo by Robin Snow

ADVANCE – Like just about everyone else, the morning of Sept. 11, 2001 started like many others for Ronnie Robertson.

The director of the E-911 system in Davie County, Robertson was training a new employee on how to answer emergency calls.

Then he got a telephone call from another employee. “A plane has crashed into one of the Twin Towers.”

“As soon as I saw it, we knew it wasn’t a small plane,” said Robertson, also a life-long firefighter with the Advance Fire Department. “When the second plane hit, we knew.”

What Robertson and every other American knew at that time was that our country was under attack. And it was happening on television right before our very eyes.

That new employee was given two choices: stay out of the way or leave. “That was the end of the training,” Robertson said.

The county had written ordinances and plans of action for emergencies and disasters, and Robertson immediately began pulling those books to see what to do next. Extra staff was called in. Volunteer fire departments across the county were put on alert.

“Everybody was on alert, relying on the news for information,” he said. “Everybody felt really better when we learned that all planes were out of the air.”

They were still worried about ground attacks, and started to worry about potential regional and local targets, he said.

People in fire service were concerned. They didn’t expect the buildings to fall. And when they did, local hearts sank.

Out of high school, Robertson at first wanted to be a full-time, paid firefighter, but was deemed “too skinny” for the current height and weight restrictions. He wasn’t deterred and became a big part of the Advance crew, and eventually landed the job at emergency communications.

What type of person volunteers for a job that could take his life on any call?

“You know that is always a possibility, but the desire to help and serve far outweighs any apprehension you may have,” Robertson said. “Training is the key, to help others and to protect yourself and other firefighters.”

In other words, you control what you can control.

“You learn to evaluate the risk vs. the loss. If there’s somebody inside … you set aside your fears and do what you have to do.”

A few years later, Advance resident Nate Oliveri had connections to bring Rescue Truck 4 and Rescue Truck 5 – trucks that had been on the scene in New York on 9/11 – to Advance. Robertson got to drive one of those trucks, but more importantly, he got to talk to young people from several counties about the importance of fire service and volunteering.

“That was one of the most rewarding things I have ever done,” he said. “There’s something about knowing the man who drove this truck that morning drove it to his death.

“Kids need to know all about it. They need to know exactly what happened. We went through the timelines. We showed them some pictures. We ended every program talking about how people came together, stood together and helped one another.”

They urged the young people to help their neighbors. “We told them to look for the widow who couldn’t rake her leaves, and rake them without expecting anything in return. If we don’t start giving to others in this country, there will be nothing left to save.

“We live in a great country. Love God, love people. If you love God, you will love people.”

Ellen Drechsler, current Davie County Clerk of Court, was working as a magistrate on Sept. 11, 2001.

There was no WiFi, internet or Facebook. The magistrate’s office had one of the few televisions in the courthouse.

“I don’t remember how I knew to turn the TV on, but I remember watching the first tower come down. I remember other people, including Sheriff (Allen) Whitaker, coming in to watch the news. Others stopped by throughout the day.

“All I wanted to do was go to the elementary and middle schools and pick up my children. I just wanted to be with my family and I wanted to know they were safe.

“Everyone in the courthouse that day walked around sort of numb. It was hard to comprehend what was happening and why. It felt that everything in the world just stopped that day when the first tower went down.”

She’s since been the the 911 Memorial in New York City. “It is a very sobering sight. You see all the names on the monument and you see how their loved ones placed flowers beside names that have birthdays and other special events. If you have the opportunity to see the memorial, you should.”

She also recommends the book “The Only Plane In the Sky” by Garrett M. Graff, which details that day and following days by people who were there.

“Parts of the story made me cry, because the events are true and people suffered. Parts of the book inspired me as there were so many people who were heroic. Firefighters, EMS workers, law enforcemnt officers as well as members of the public who risked their own lives to save others.

“It seems to me we have forgotten what makes a real hero. If you take a few minutes and study the events of 911, you will see true heroes,” Drechsler said.