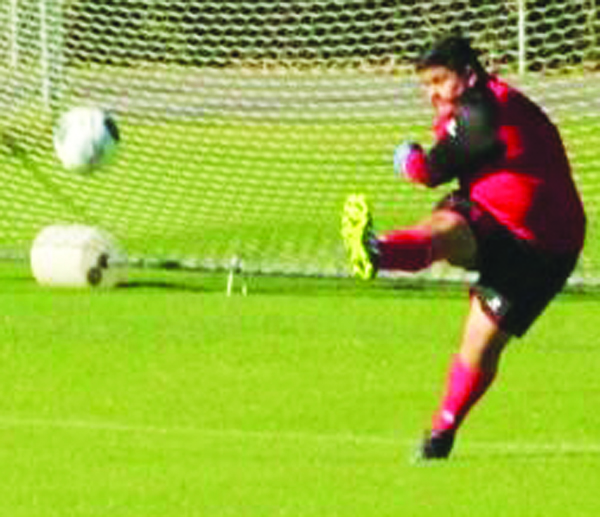 After several dreadful years, the soccer gods are smiling on the North Davie boys soccer team.

The Wildcats are 3-0 after beating South Davie (twice) and Ellis.

“We’ve got a strong offensive line,” North coach Daniel Gamble said. “They grew a lot last year when they were sixth graders (and did not win a game). They’ve got more maturity and more size, which makes a big difference.”

Who are behind the turnaround? Guys like Dylan Cassetta, Ronald Perez, Max Rappaport, Emanuel Perez and Hunter Stephens. And perhaps its foremost player, Ethan Christie, has barely seen the field due to an injury.

When Christie heals up, look out.

“Ethan played about two minutes (in the opener),” North assistant coach Nathan Stephens said. “He thought he was good enough and wanted to try. He came out after 2-3 minutes. I’ll tell you what, that kid is dynamite. He might be the best player in the county.”

“Yeah, he’s really good,” Gamble added. “We’re excited about hopefully getting him back in there.”

The Wildcats rocked host South Davie in the opener on Aug. 26.

“It’s a rebuilding year for sure,” South coach Russell Hilton said. “North is good this year. They played without their best player and still kicked our butts. And they’re mainly seventh graders. They’re going to be good next year, too.”

After losing big in the opener, after falling behind 2-0 in the first five minutes against visiting Summit on Aug. 30, the prospects for the Tigers looked bleak at best.

But wait a second. South came roaring back to stun Summit. The game changed when South pulled within 3-2 before halftime.

“You could see the motivation flip at halftime,” Hilton said. “They saw that we could compete.”

Dejesus Longares was the hero, scoring the last two goals and three for the game. The go-ahead goal came with 10 minutes left.

“Everybody was going nuts,” Hilton said.

“Isaiah saved our butts three or four times in the last 10 minutes,” he said. “They put all their good players up front and had two or three chances to have breakaways. Isaiah was chasing them down.

“William hadn’t practiced in 10 days, but he made so many big saves. He’s going to be legit.

“Paxton’s not the fastest and not the most athletic, but he’s always in the way, always getting his foot on the ball and stealing it away. In two years, once he grows into his body, he’s going to be a beast on defense.”

Omar Mejia Carrillo had a goal and an assist. Dominic Trevino had an assist. Hilton was ecstatic with the outcome.

“I was surprised how well we played because they have five or six ninth graders up against my team of (14) sixth graders,” he said. “They probably had 30 on the team. It was an awesome game.”

Rappaport scored two goals as North won at Ellis on Aug. 31 in a game that was scoreless at halftime. Ronald Perez had the other North goal.

“It was a really good game,” said Stephens, who filled in as head coach with Gamble under the weather. “The first half could have gone either way. Both teams were playing really hard.”

Ellis goalie David Fishel had a lot to do with the 0-0 halftime score.

“I’ve got to give their goalie credit,” Stephens said. “He played really good in that first half. We couldn’t get anything by him.”

It was the opener for the Jaguars, who got their goal from Santiago Maganda.

Ellis ran into a powerful opponent on the road on Sept. 1.

“We have a very young team (with four eighth graders, nine seventh graders and two sixth graders) – not only in age but in experience with only a few returning from last year,” Jones said.

Despite the margin, there were bright spots.

“David had a great game with over 21 saves,” Jones said. “Omar Verona and Owen Tomlinson were tough defenders who never stopped going after the ball.”

The Wildcats added to their momentum at South on Sept. 2. E. Perez (two), R. Perez and Rappaport had the goals, while Stephens dished out three assists. Cassetta had one assist, and Roger Luna got the shutout in goal.

“This is a good group,” Stephens said. “This group is going to make a pretty good impact in a few years when they get to Davie.”