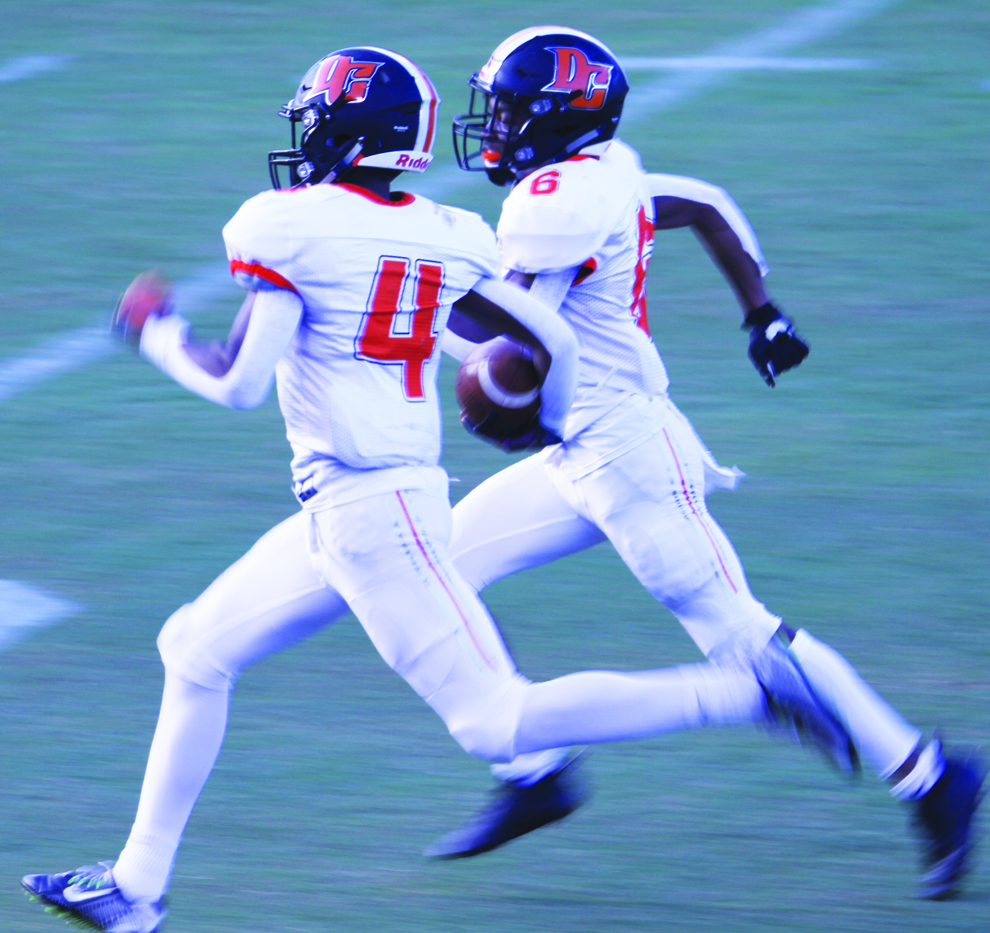 During a 5-2 season last spring, the star running back averaged 29 carries. At West Rowan in Friday’s season opener, he had his fewest carries (10) in 16 games, which dates to his sophomore year. No matter. The War Eagles demonstrated their explosiveness with Carney playing basically every other series. Quarterback Alex Summers and receiver Za’Haree Maddox tormented the Falcons as Davie won in a cakewalk, 56-30.

Coach Tim Devericks limited Carney’s carries in hopes of having him fresh for the seven-week stretch of Central Piedmont Conference action beginning Sept. 17. Despite the small workload, he still managed to score four touchdowns in a game for the seventh time in his illustrious career.

“His pitch count was way too high last year, so we’re trying to make sure he’s fresh for the whole season,” Devericks said. “We’re preparing for a long season and we want to make sure No. 2 is as healthy as he can possibly be (for the CPC).”

Scoring 14 points in the first 33 seconds would be absurd for your video game, let alone a game in real life, but that’s exactly what Davie did. Zymere Hudson took the opening kickoff 83 yards, galloping through a gaping hole up the middle. With Maddox running stride for stride to his side, Hudson was going all the way until he lost his balance and fell at the West 2.

“He got shot by a sniper,” Devericks deadpanned. “The guys did a great job of blocking. He didn’t even have to make a move. We were messing with him on the sideline (about tripping).”

“I was anxious – didn’t know what to expect – but our guys were ready,” Devericks said.

The Falcons went 63 yards in 15 plays and chewed 6:47 off the clock before settling for a 27-yard field goal. But the electric Maddox answered immediately with a catch-and-run gem. On the first play from scrimmage following the FG, Maddox took a screen pass, wiggled through four defenders at the West 40 and broke into the clear, a 52-yard TD that marked Davie’s third one-play scoring drive in a span of 11 minutes, three seconds.

Davie’s wildcat offense in the spring featured Caleb Bowling in the backfield with Carney. The new version has linebacker Justin Hayes in Bowling’s old role. That package converted a fourth-and-1 from the West 16, with Carney picking up 7 yards around the end. On the next play, Summers zipped a 9-yard slant to Maddox, their third TD hookup in about 14 minutes.

Maddox wasted no time generating “wow” moments while finishing with a career-high three TDs, matching a career high in receptions (eight) and surpassing 100 receiving yards for the fourth time with 117.

“We didn’t know if their safety was going to come down, and the screen kept getting open,” Maddox said. “We executed it all week in practice.”

“It’s a read by Alex,” Devericks said. “He’s reading what the defense does. If they bring an extra guy in the box, he’s throwing it out there. Zymere made a bunch of good blocks to spring Za’Haree.”

Summers picked up where he left off from an overtime win over West Forsyth last April. The senior QB was masterful, going 20 of 26 for 274 yards without a turnover. The numbers from his last two games combined: 40 of 57 for 494 yards with six TDs against one interception.

“This summer and in preseason practice, Ty (Miller, a sophomore backup) has really pushed Alex,” Devericks said. “They have a great relationship and they compete every day in practice. He made some good touch throws tonight that he didn’t make last year.”

Down 28-3 early in the second quarter, the Falcons did get back in the game – albeit briefly. They completed three straight passes  to reach the end zone with :23 left in the first half, and Akin Robinson snapped an 80-yard run on the first play of the third, cutting Davie’s lead to 28-17.

“We went off at a high rate, but then we let the intensity down a little bit,” Devericks said. “But then we picked it back up.”

This is how Davie’s offense responded: Summers completed consecutive passes to Hudson, Maddox and Brodie Smith, who gained 31 yards to the West 6. Carney and the wildcat formation scored from there in two plays.

Hayes, Andrew Shuler and Silas Fuller forced a three-and-out. On third-and-16, Summers rolled out and connected with Carney for 20 yards, then hit Smith for 15. Carney scored his fourth TD from 5 yards out to make it 42-17.

West kept showing fight and mounted another rally. Noah Loeblein, a veteran QB, hit Ben Sweet for a 16-yard TD, and he threw a 55-yard bomb to Peter Williams-Simpson (seven catches, 129 yards) as West pulled within 42-30 with 2:43 left in the third.

“In high school football, you can never think it’s over,” Devericks said. “That’s some of the growth this team has to get. We have to play every play and play all four quarters. We have some young guys playing and that kind of showed up tonight. We have to be more mature and we’ll work on that.”

Question: How long would Davie’s offense need to respond from the 42-30 score? Answer: 80 seconds.

Maddox had a nine-yard catch with a 15-yard penalty tacked on. A sack made it second-and-15, but Summers escaped a collapsing pocket and found Aidan Froelich for 26 yards. Carney covered the final 11 yards as Davie restored order at 49-30.

“That speaks to their maturity,” Devericks said. “We’re more mature on the offensive side.”

Devericks is looking for sophomore Markel Summers to relieve some pressure off Carney. He turned on the speed in the fourth quarter, breaking a 57-yard TD run to finish with 85 yards on 12 carries.

“Markel has a lot of quickness,” Devericks said. “He’s gotten good at catching the ball out of the backfield, too. We can use him at receiver. He’s very diverse.”

Smith, a backup running back in the spring, was the No. 2 target with six catches for 67 yards. Hudson had three catches and Froelich and Carney had two each as Summers threw multiple TDs for the sixth time in eight junior/senior outings.

“I loved the diversity,” Devericks said. “You had Tate. You had Zymere making great blocks for Za’Haree. You had Brodie and Aidan making catches. We had different weapons and they couldn’t focus on one place.”

The defense, which is having to completely rebuild in the secondary, was sparked early by Shuler, who forced an incompletion by hitting Loeblein as he released the ball and followed with a tackle for loss. Ethan Silvey, Coy James and Will Burris swarmed running back Cayleb Brawley for a 3-yard loss when Davie forced West to settle for the field goal. The defense got back-to-back sacks from Cole Warner and Shermer.

Although Devericks is having to be patient with a young group on defense, some guys showed they can be factors – and most of them are non-seniors, which is exciting for the future.

But no one was better than junior rush end Shermer, who collected three sacks. “Mason is big, fast and strong,” Devericks said.

• Carney raised his career TD total to 60, which ranks No. 2 in Davie’s record book.

• Palmer Williams, the younger brother of left tackle Spencer, had a strong debut at kicker/punter. With JT Bumgarner snapping and James holding, he went 8 for 8 on extra points. He averaged 36 yards on five punts and placed three inside the West 20.

• After Williams-Simpson scored his second long TD, Davie said enough’s enough and put Maddox at cornerback. He played there the final three series, and Loeblein’s go-to man was quiet the rest of the night. “I felt good (on defense),” Maddox said. “I mean, he didn’t catch one, so I guess I did alright.”

• The offense made history with 56 season-opening points. The previous high out of 67 openers came in a 49-6 win at Alexander Central in 2001.