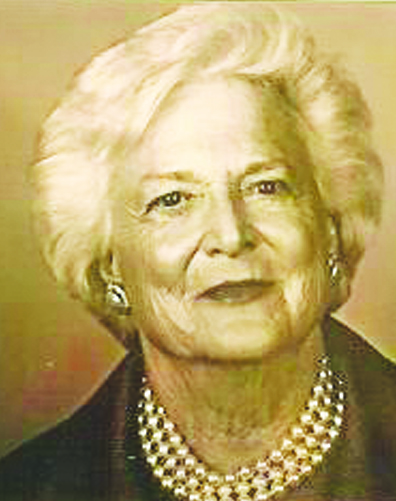 The only other lady, who was both the wife and mother of a President of the United States was Abigail Adams, the wife of the second President and the mother of the sixth.

Barbara Bush was a down to earth person who said what she believed without worrying about the political fall-out. These traits gained her the admiration of the American people.

Barbara Pierce was born on June 8, 1825 in New York City but was raised in Rye, N.Y.  Her parents were Pauline and Marvin Pierce, who was the president of the McCall Corp.

Barbara went to school at Rye Country Day School and then to Ashley Hall in Charleston, S.C. for high school. During Barbara’s senior year at Ashley, she returned to her home in Rye for the Christmas holidays.

At a dance at the country club that Christmas of 1941, Barbara met George H.W. Bush, a senior from Phillips Academy. They were immediately attracted to each other. During the rest of that school year, they corresponded. They soon realized that they were in love, very much in love.  They got together during all vacations and holidays.

Dec. 7, 1941, Japan bombed Pearl Harbor and the United States declared war on Japan and shortly thereafter on Germany.  Immediately after George graduated from Phillips Academy, he and many of the other Phillips seniors felt they should help protect their county so they enlisted in military service.

George wanted to join the U.S. Navy and become an aviator.  He volunteered, was accepted, and was soon on his way for training. In Chapel Hill, N.C.

The correspondence between George and Barbara continued and they got together every chance they got. During that summer of 1943, Barbara was invited to join the Bush family at their vacation home at Kennebunkport. She was absolutely sure the family would hate her. The family took athletic Barbara right into their fold and really liked her.

During the summer of 1943 and before Barbara began her freshman year at Smith College, Barbara and George got secretly engaged, and, by December of 1943, they decided that they would tell the family. There was no such thing as just telling the family.  On Dec. 12, the New York Times said, “Smith College student will be the bride of Ensign George Bush.” The same day George wrote to Barbara and said, “How lucky our children will be to have a mother like you.  Bar, you have made my life full of everything I could ever dream of – my complete happiness should be a token of my love for you.” That was one of many letters that George wrote to his wife.

George shipped out to the Pacific Theater of war.  Barbara began her sophomore year at Smith but dropped out of school.  She was smart but she was not interested in school at that point. Years later an interviewer asked about her major in college, she said, “Barbara Bush majored in George Bush at Smith College.”

Barbara like everyone else at that time waited for news from the war zone.  George wrote to Barbara every day. Then the letters stopped. George’s airplane had been shot down by the Japanese as he completed a bombing mission over Chichi Jima. George was lost at sea but he was finally rescued by a submarine.  He went back to his ship and stayed even though he probably could have come home. He thought it was his duty to stay with his ship.

Finally, as his ship was returning to the United States, Barbara and George set a wedding date. Such happiness when he finally arrived in Rye.

George and Barbara were married at the First Presbyterian Church in Rye on Jan. 6, 1945. George entered Yale and took all the courses he could so he could graduate and go to work. While he was in school, he and Barbara lived in student housing, and she stayed busy doing what all of the other wives of students did. In 1946, the first Bush baby was born, and they named him George Walker Bush.  George graduated from Yale in two and one half years Phi Beta Kappa.

George could have followed his ancestors to Wall Street, but he wanted to make it on his own. He decided to go to Texas and seek his fortune in the oil business.

With mother, father, baby, and all their belonging loaded into George’s Studebaker, they headed to Texas. George got a job and they settled in Odessa.  Their first home there was an apartment where they had to share a bathroom with two ladies of “ill repute.” The Bushes later moved to a house. In 1949, George and Barbara had a baby daughter that they called Robin. During those years, Barbara was busy with children and community activities. George was busy in the oil industry.

The Bush family later moved to the hot, dusty, windy town of Midland, Texas, where they lived in an 847-square-foot house.  It was there that their son Jeb was born. When Robin was 3 years old, she got sick—diagnosis leukemia. George and Barbara were devastated. They left George and baby Jeb with neighbors and took Robin to a hospital in New York.  Everything that could be done was done for Robin but she died. The death of their beautiful daughter was such a blow to Barbara and George that they carried the hurt with them the rest of their lives.  George and Barbara had three more children, Neil, Marvin, and Doro, in four years.

George got interested in politics. He became chair of the Republican Party in Harris County, Texas. He then ran for a seat in the U.S. House of Representative. He lost his first election and then won during the next election. George moved through a number of other jobs. President Nixon chose him as the U.S. representative in the United Nations. Barbara loved that appointment.  Then Bush was chosen as chair of the National Republican Committee. Next he was appointed chief of the liaison office to the People’s Republic of China. That job was a real adventure for Barbara, but, about a year later, the President asked George to come home and head the Central Intelligence Agency. That did not work well for Barbara because George had always been able to discuss his work with her—not so with the CIA. Barbara became severely depressed – a depression that lasted quite some time. Barbara finally was able to recover but she always had sympathy for those who were depressed.

When Ronald Reagan became the Republican candidate for President in 1980, he chose George H.W. Bush to be his running mate. The Reagan/Bush ticket won. There never was a close relationship between Barbara Bush and Nancy Reagan, but Barbara enjoyed her time in Washington because she had many friends there that dated back to the days when George was in the House of Representatives.

After serving eight years as vice president. George was the nominated as Republican candidate for President in 1988. Barbara campaigned hard with her husband and on her own. George chose Dan Quayle to run with him as vice president. The Bush/Quayle ticket won.

“Life Magazine’s First Ladies” in a tribute issue says this about First Lady Barbara Bush: “She had her own signatures: an acerbic wit, an outgoing personality and the intimidating raised eyebrow that froze those who worked for him. She didn’t have an office in the West Wing or attend cabinet meetings…but her presence was everywhere – in the shots she took so that the President didn’t have to, in the fortress she built around him that gave him the strength to do the job. Skeptical when he was trusting and as outspoken as he was diplomatic; she had his back at every turn: if you slighted him, you would answer to her. Barbara Bush never promised a Rose Garden,  photo-ready perfection, or perfection at all. She was honest about her size (14), her hair (white since she gave up dyeing it in her 30s), her weight (always a few pounds over the ideal) and her pearls. Those were $90 fake, but there wasn’t much else that was fake about her.”

There you have the First Lady that America admired and loved.

George Bush ran again in 1992. He lost that election to Bill Clinton. Both of the Bushes were probably traumatized, but they packed their bags and moved to Houston, where they spent their pleasant retirement years.  Bill Clinton, who defeated Bush, even became a friend.

Barbara Bush made literacy her signature project while First Lady and established the Barbara Bush Foundation for Family Literacy. The lady who said that she married the first boy she ever kissed and who said that statement almost made her children vomit, died on April 17, 2018. She was buried in the garden at the Bush Memorial Library at College Station, Texas. Her husband, who once wrote, “You have given me joy that few men know…I have climbed perhaps the highest mountain in the world, but even that cannot hold a candle to being Barbara’s husband,” died Nov. 30, 2018. He was buried beside the lady who had been his wife for 73 years.