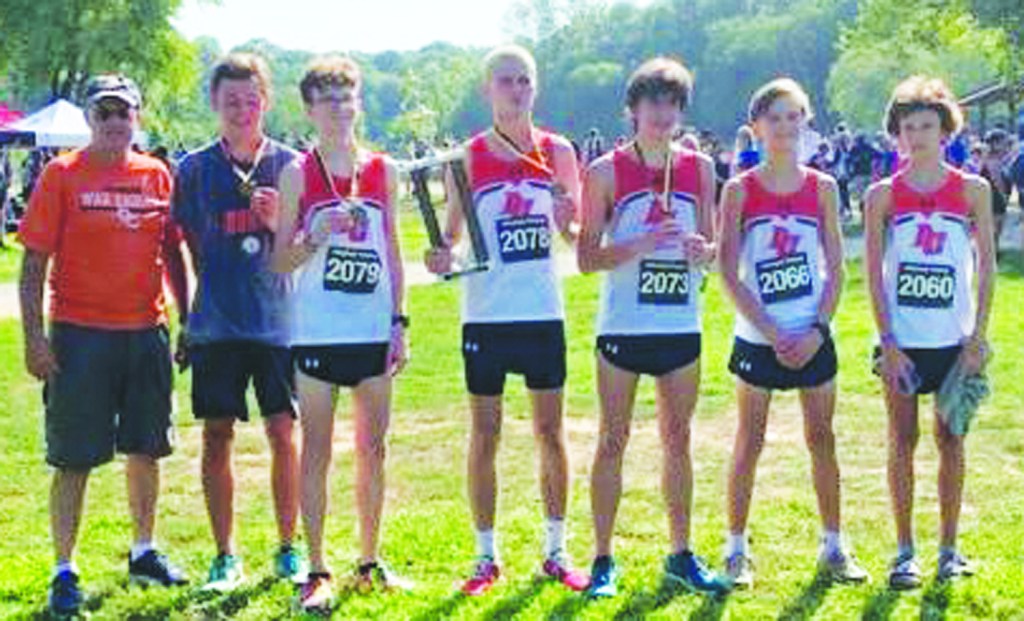 For the first time in nearly two years, the Davie cross country team was in action at a traditional high school invitational as it traveled to Charlotte’s McAlpine Park for the Providence Invitational Aug. 28. A total of 48 schools from across the Carolinas competed in a series of races that saw the mercury rise well into the 80s with high humidity. Competing in the Invitational Division, the War Eagle boys proved to be the class of the field.

Davie runners streamed across the finish line one after the other as they claimed four of the top eight spots. In all, 140 athletes representing 23 schools completed the 5k distance while the remaining schools competed in separate races. Davie’s total of 43 points easily outdistanced runner-up Lincoln Charter (77). Hickory Ridge took third with 145.

Leading the way for Davie was a trio of seniors. Andrew Brown battled two other runners over the final 400 meters before finishing second with a time of 17:32, a mere three seconds behind winner Joshua Ashley of Hickory Ridge. Caleb Young took fourth in 17:49 while Reece Yount was fifth in 17:55. Junior Owen Sulecki was eighth in 18:02. A pair of War Eagle freshmen rounded out the Davie squad as Tyler Hill (18:50) and Thomas Essic (19:03) placed 24th and 30th, respectively.

“It was a very encouraging start for us,” said coach Rob Raisbeck. “It was getting hot fast out there and that contributed to slower times in general. Coach (Jeff) Jones and I were very pleased with our effort and execution. Lincoln Charter went out very fast and in the first half mile had three or four guys in front of our No. 1. But our pack methodically moved up through the field and we were comfortably ahead by the two-mile mark. Reece had a previous PR of around 19:30, but we knew based on his training he was ready for a breakout performance. And our usual Nos. 5-6 runners were out of the lineup, so we moved Tyler and Thomas up to the varsity race and they both ran extremely well. They were the number one and three freshmen in the race.”

The Davie girls were next up in a field of 21 teams and finished eighth. Lake Norman Charter edged Charlotte Catholic and Northwestern (S.C.) in a tight team race.

“We had three of our girls out today and that gave Raelyn and Sarah an opportunity to run the varsity race,” said Raisbeck.  “Considering our freshmen have only been training the last couple of weeks, we felt like they performed quite well.  Riley, Lexi and Gracie will be steady all year for us so we just need to get the rest of our varsity girls back in the lineup and we should be fine for our next meet Sept. 10. We are still hoping to get a few more girls to join the team as well. It’s not too late. ”

Although the varsity races were split into two divisions, all of the JV runners competed in one race. The Davie boys had 13 finishers among the nearly 300 competitors. Of those 13, there were seven freshmen making their 5k cross country debut.  Sophomore Will Allard led the way with an 88th place finish of 21:37.

“By the time the JV race started the heat was really starting to take a toll on the runners,” said Raisbeck. “Many of our freshmen have just started training with us in the last few weeks and we did not require them to race this soon for that reason. But we have an enthusiastic group and they nearly all wanted to give it a shot. They got some valuable experience and I think they will all dramatically improve over the next eight weeks.”

Next on the schedule is Friday Night Lights on Sept. 10 at Ivy Redmond Park in Kernersville. Over 90 schools are set to compete with the championship race set to begin under the lights after 9 p.m. A fireworks display will conclude the evening festivities.

“FNL is quite a spectacle,” said Raisbeck. “It will be a mass of humanity and unlike anything you have ever seen. Hopefully we will get a good crowd cheering us on.”