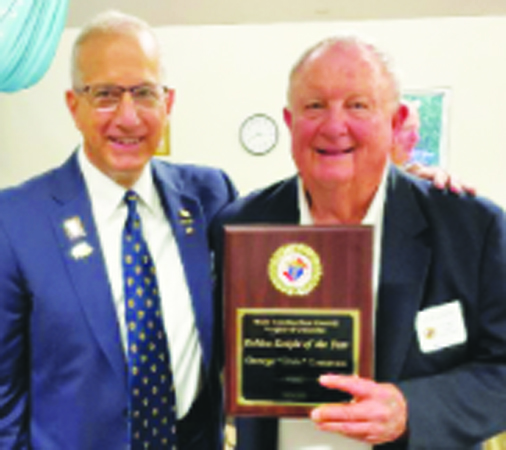 George “Dale” Lemmon was honored with the North Carolina Knights of Columbus “Golden Knight of the Year.” He is shown with Steve Grimaldi, Grand Knight of Council 12610.

Mocksville’s Knights of Columbus celebrated the 20th anniversary of the founding of St. Francis Assisi Council 12610 with a dinner at the church hall honoring its founding members and current members who were cited by the state organization for their work in the parish and community.

Council 12610 was the first chartered in North Carolina in this millennium. Its first Grand Knight, Roger Hunckler, was among the founding members present who were honored.

Officers of the North Carolina Knights of Columbus, Deputy JC Reiber and State Secretary Chris Losack presented awards to George “Dale” Lemmon and the Hoke family for their work benefiting the parish and the greater community.

Lemmon was named North Carolina’s “Golden Knight of the Year.”

Paul Hoke, his wife, Renee, and their sons, Chris and Mathew were named the North Carolina “Family of the Year.”

The Knights of Columbus, a Catholic men’s fraternal organization, was founded in New Haven, Conn. in 1882 by a parish priest and 40 men.  The idea was to help the widows and orphans who would otherwise face poverty when their breadwinners died.

The first council in North Carolina was chartered in 1903 at St. Peter’s Church in Charlotte.

The organization has more than 2 million members worldwide. Its goals have expanded far beyond self-help and are now rooted in “Charity, Unity Fraternity and Patriotism,” according to Steve Grimaldi, Grand Knight of Council 12610.

Grimaldi said the council and its members volunteer to support many charitable organizations in Mocksville and Davie County including the Special Olympics.

“We have a real soft spot in our hearts for those kids,” he said.

Cooleemee food pantry getting its own building