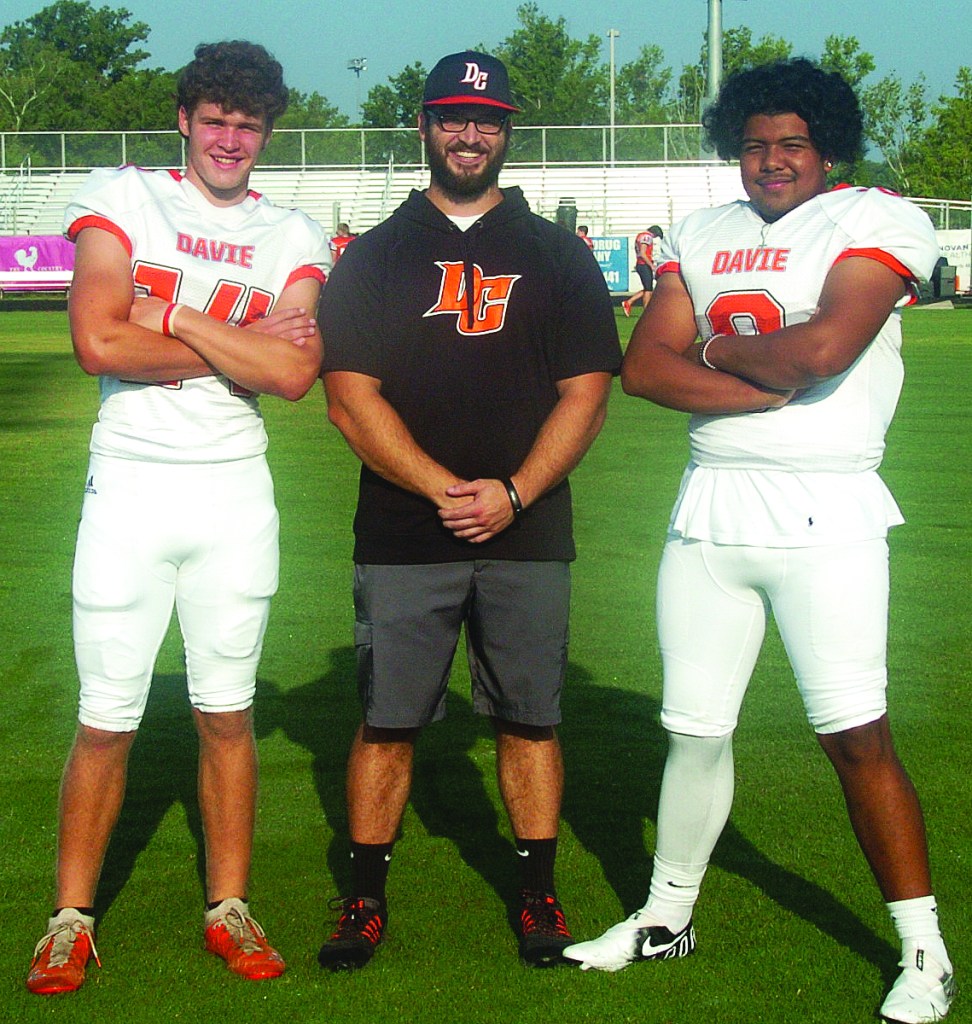 Senior Alex Summers has mastered Davie’s offensive scheme, a veteran who has seen it all.

Sophomore Ty Miller is a talent, bringing a mix of size, speed and strength.

There you have Davie’s 1 and 1A quarterbacks.

“A little bit of competition is good for everyone,” head coach Tim Devericks said. “The best thing about it, those guys are really, really tight, and that’s what you want in a team.”

Summers, the returning starter, is not that fast. (His longest run last spring was 15 yards.) He’s not that powerful. (He’s not going to churn it between the tackles.) But he knows how to play the game.

As a junior, he would have been the backup had Nate Hampton stayed around for his senior season instead of early enrolling at Liberty. He was undistinguished after attempting zero varsity passes as a sophomore.

Summers’ precision was historically good. His .618 completion percentage ranks third among Davie QBs this century, trailing only Chris Reynolds (.652 in 2015) and Garrett Benge (.638 in 2006).

He punctuated the season with an unforgettable exclamation mark. With Davie down seven late in the fourth quarter against archrival West Forsyth, he threw a 42-yard TD to Za’Haree Maddox. With Davie down seven in OT and facing fourth down, he threw a 9-yard TD to Maddox. On the make-or-break two-point try, he found Zymere Hudson for the game-winner.

While teammates exploded with joy, the stoic Summers was predictably the least excited guy on the field. He always looks like nothing bothers him. He’s a face of stone, a picture of concentration. He just plain knows the offense inside-out.

Said Devericks: “Alex knows where he’s going before the ball is even snapped. That’s experience and studying what’s going on through the years.”

Said defensive coordinator Blaine Nicholson: “Alex distributes the ball with timing. He throws people open. He’s so smart. He executes the offense as perfectly as (offensive coordinator Matt) Gould wants him to. It’s been really impressive when somebody makes the perfect throw over and over again.”

Said Gould: “He has a plan and it’s awesome to see him be super comfortable in the offense. When he’s out there, he’s in control. He knows what the defense is doing. He knows where the offense’s answers are. Yesterday he saw a couple blitzes, he knew right away what the answer was and made them pay for blitzing. He’s making sure everybody else is doing what they’re supposed to do. Everybody loves Alex and respects him. If he says something, they know to pay attention. He’s quiet, but he always brings a good attitude, keeps everybody’s spirits up and has fun out there.”

Miller (6-2, 195) is an overqualified JV quarterback, but the sophomore will run the show on Thursdays, dress out on Fridays and wait his turn as an ace in the hole. At some point, you can expect Gould to dial up packages to utilize Miller’s skill set. After all, he appears to have an unlimited ceiling.

Last spring he led the JV War Eagles to a perfect season (5-0) in which they rang up a staggering 46 points on average. He went 6 of 10 for 203 yards and four TDs against East Forsyth. He ran for six TDs and went 7 of 10 for 177 yards against West Forsyth.

Gould: “Ty is one of the best athletes on the team, and he also happens to play a pretty good quarterback. I mean he can make all the throws, too. He’s getting more comfortable in the offense and understanding where to go with the ball. And he can definitely make plays with his feet.”

Devericks: “He’s learning and all of a sudden he’ll make a play and you’re like: ‘Wow.’”

Nicholson: “He has talent, foot speed, pocket presence, strength. I mean he can make every throw. He carves us up (in practice).”