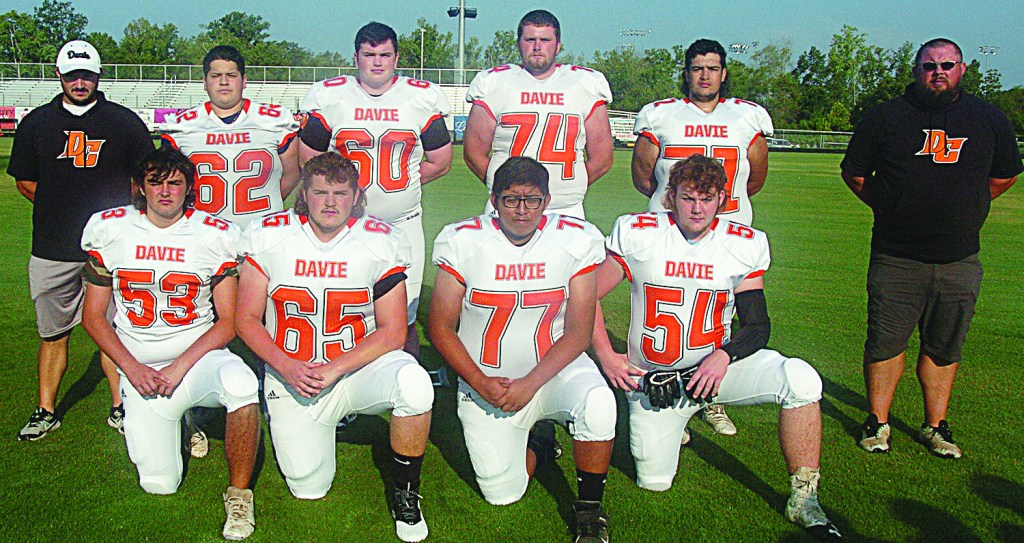 In a perfect world, Davie’s offensive line would have two maulers hunkering down right now at the tackle spots. But football – and life – can be cruel. Senior Spencer Williams is primed for his third varsity season at one tackle, but the other tackle, senior Camden Beck, is on the shelf with an injury that occurred March 27 at Glenn.

“I hate it for him because he got screwed,” defensive coordinator Blaine Nicholson said. “In a normal year, he would have already been recovered by this time if it would have happened in the fall. But since it was a spring thing, he got screwed.”

For all the gloom found in Beck’s right knee, there’s this ray of sunshine: The War Eagles are feeling good about what they’ve got, even if Beck (6-2, 265) can’t return until mid-October.

Nicholson said: “When he gets back and you’ve got those two tackles and you’ve got the guys we’ve got elsewhere … Anybody can run the ball with Tate Carney, but when you get the push that those guys are going to, it’s going to be special.”

The hulking Williams (6-5, 260) will move from right to left tackle, where Beck has started since his freshman year. Williams is an enormous talent in track, winning the 4-A championship in the shot put and finishing runner-up in the discus.

Offensive coordinator Matt Gould: “He’s been jacked up and running all over the place. He’s a big ol’ dude. I think he missed being with the guys and hanging out with them. He likes football, too. I know he loves track and that’s what he wants to do in the future. But he’s laughing, having fun with the guys and enjoying football. He looks bigger than ever. He’s been stealing his brother’s food or something.”

Head coach Tim Devericks: “I think there’s a lot of pressure off him. He had a lot of pressure in track and he’s just having fun. Today at practice he wanted to catch a punt. Sometimes we get in the heat of competition, getting ready for a season, and we’ve got to step back and say: ‘This game is supposed to be fun.’ Spencer has brought that as well as great athletic ability.”

The OL has seen a pleasant development from senior Ethan Doub (6-0, 280), who started at guard last spring and will take over at right tackle.

Gould: “With Camden out, he’s going to step into the tackle role. He looks good, so we have two senior tackles that we feel good about.”

Devericks: “He’s gotten stronger. Ethan is a quiet kid, but he comes to work every day.”

Coaches had high praise for the starting center. Junior Charlie Frye is only 210 pounds, but he brings ferocious intensity.

Gould: “He did it for two years on JV. He’s a little undersized, but he is the most intense guy on our OL. I mean he will get after you until the whistle blows every single snap. He’s able to call out the blitzes and get us right in the run game. He has to make all the calls, so he’s really taken on a leadership role.”

Devericks: “Charlie wants to compete on every play. He’s like a bulldog, ready to go every play. You could say: ‘Hey, Charlie, we need you at corner.’ He wouldn’t know what he was doing, but he would run out there and try to compete.”

Beck’s absence has created an opportunity for players looking to be next. Sophomore Brysen Godbey (6-1, 250) has made a favorable impression, making him the likely starter at right guard. The challengers for the job at LG are seniors Max Martinez (5-8, 305) and Brandon Logan (5-10, 305).

Meanwhile, Beck is shooting for Oct. 15. If he makes it back for homecoming against West Forsyth, he will be a galvanizing presence. For now, he’s an extension of the coaching staff, and he’s shown Devericks he’s the ultimate teammate.

“There are people who are playing who have missed, but Camden hasn’t missed a practice and he’s willing to do whatever,” Devericks said. “He’ll film. Today a coach had to leave and he took the JV offensive line and coached them up on some things. He’s facing a hard time in coming back from (torn ACL and MCL), and I’m really impressed with what Camden has done in handling this situation. He hasn’t lost a bit of strength in his upper body, and it’s very impressive.”