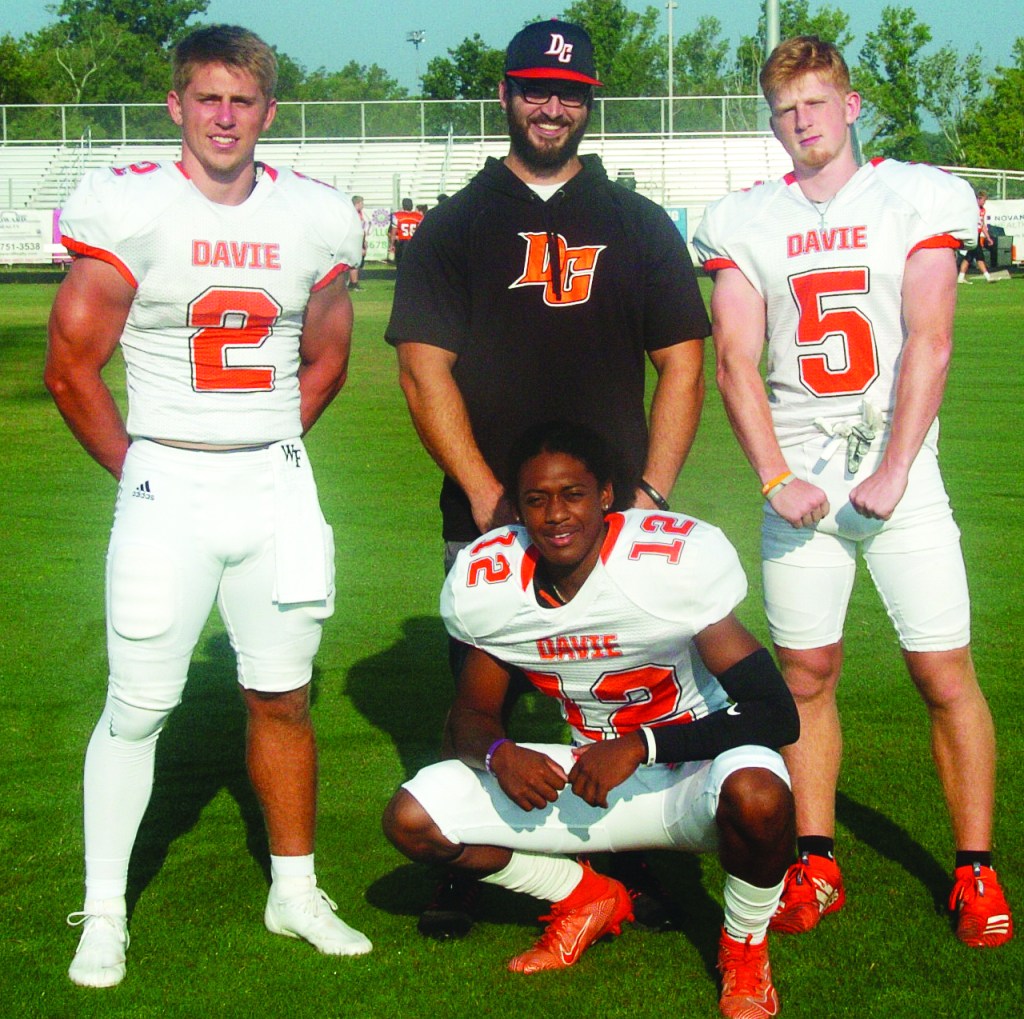 Davie’s Ferrari of running backs – Tate Carney – will go down as one of the greatest in program history, and he’s not even done yet.

When Carney gets the ball in his hands, you feel electricity – you might see something you’ve never seen before.

In that third game at Reynolds, a 62-43 Davie win, Carney broke Cooter Arnold’s single-game rushing record of 322, and the eight TDs tied a state record as he became just the sixth player to do that in a game.

When he had 47 carries for 253 yards and four TDs in the fourth game, a 49-40 win at Reagan, the Carney thing was officially ridiculous.

Fans became almost numb to how good he was. When he ran 44 times for 289 yards and three TDs at Glenn in one of many barnburners – this time with Davie falling short, 53-46 – it was just another day in a monster season. He put up 194 yards in defeat against East Forsyth.

Glenn and East would tie for first place in the CPC. Carney hung an aggregate 483 yards on the co-leaders.

What makes the Carney phenomenon all the better is he combines talent, work habits, a desire to excel and quintessential leader.

“You might get someone like him every 10 years athletically, but as far as what kind of person he is and what he does on and off the field and the total package, that might be once every 20 years,” head coach Tim Devericks said. “Football player, student … he’s an all-around great person.”

With 56 career TDs, Carney is on the cusp of Arnold’s record  of 67. As if all the rushing stuff weren’t enough, he will burn defenses as a pass-catcher. His hands are like Velcro, allowing him to rank fifth in two career categories (1,422 receiving yards, 107 receptions).

Defensive coordinator Blaine Nicholson said: “Everybody knows it’s going to take more than one to take down Tate Carney.”

Offensive coordinator Matt Gould: “He was named a captain last year and he’s stepped into that leadership role even more now, taking some of the young guys under his wing. He’ll help guys out, like Markel (Summers). Today he was coaching him up on some little things that make a difference between that good player and that great player. Just little practice habits. Obviously he’s a great player – he won the conference player of the year (on offense) – but it’s also the off-the-field stuff. On offense, he makes sure everybody is doing the right thing.”

In early June, Carney verbally committed to Wake Forest, where his brother Cade played from 2016-19. “I think he kind of had that (timing) planned,” Gould said. “That way he can just relax and play ball.”

If Carney gets banged up or needs a break, Davie has potent guys who can take over in the backfield, two guys who will primarily play receiver.

Junior Brodie Smith is a starter-caliber RB after averaging an impressive 6.7 yards per carry in spring 2021 (40 carries for 268 yards). Sophomore Summers has vast potential. As a JV freshman, he rushed for 100 yards against West Rowan, 203 against Reagan and scored three TDs against West Forsyth, including one on a kickoff return. He was among the ringleaders for a 5-0 team that crushed opponents by a running score of 230-50.

“Markel led our JV in rushing, and he’s going to step up and play a big role,” Gould said. “He has speed and likes to run with some power and run people over maybe when he shouldn’t. We trust him to go in there and spell Tate.”