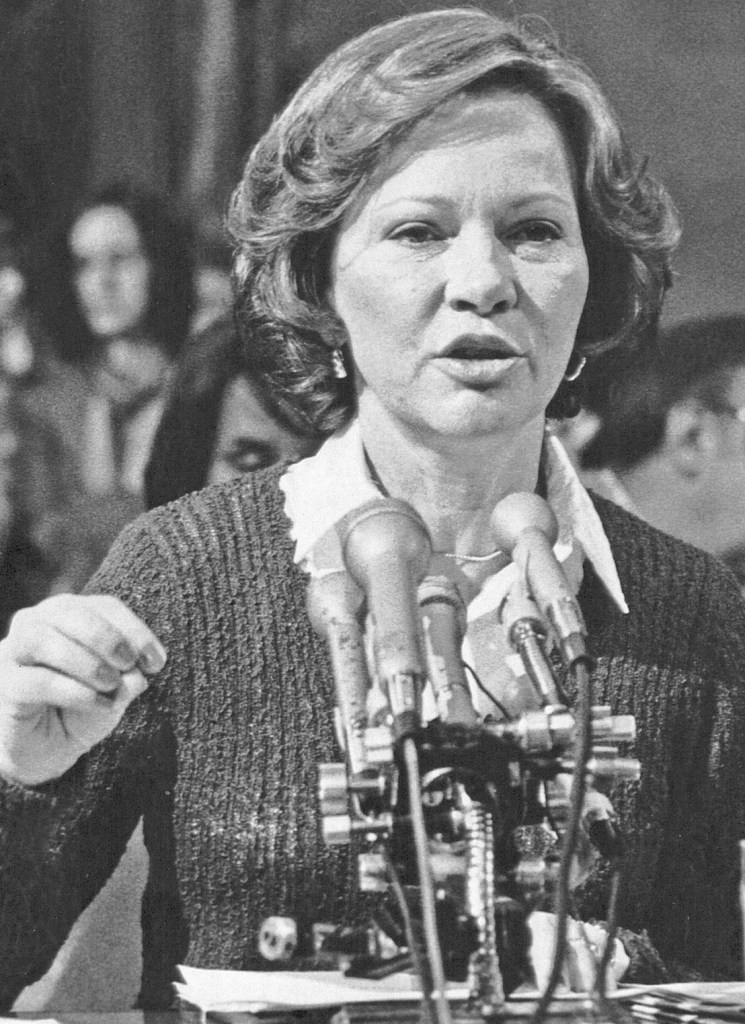 When Jimmy Carter lost the election in 1980, someone said, “Mr. President, you’re a great example…you don’t seem bitter at all.”

Rosalynn Carter replied: “I’m bitter enough for both of us.”

Those words are found in the book, “First Lady from Plains” by Rosalynn Smith Carter. When President Carter lost the election after serving one term, he was terribly disappointed, but he did not let the loss ruin his life.  Rosalynn said that she was bitter, but she did not let her bitterness ruin her life, either.

The Carters went back to their home in Plains, Ga. and decided to try to help troubled people throughout the world.  They established the Carter Center at Emory University in Atlanta to do just that if the distress was caused by disease, disaster, or political turmoil.

Both of the Carters also begin to work for the Habitat for Humanity, even driving nails themselves.

Both also became writers. Rosalynn’s Carter’s autobiography, “First Lady from Plains” has a copyright date of 1984, but it is an interesting book which reveals what life was like for the First Lady.

In a small, hot, dusty town in southeast Georgia, a baby girl was born to Wilburn and Allethea Smith in 1927. They named their baby, Eleanor Rosalynn. Mr. Smith was a mechanic and a farmer. Mrs. Smith was a stay-at-home mother as were most mothers at that time.  The Smiths were loving parents who expected Rosalynn and her two brothers to do their best in whatever they were involved.

When Rosalynn was 13, her father died of cancer. Rosalynn was devastated.Mrs. Smith had to find a way to support the family because there was no social security or other kind of help available. Mrs. Smith began a dressmaking business and Rosalynn helped with the sewing.  Mrs. Smith finally got a job in the Plains Post Office which made life a bit easier because she got a monthly check, but money was still scarce.

During high school, Rosalynn worked hard and graduated at the top of her class. Mrs. Smith found enough money to send her daughter to Georgia Southwestern Junior College.

During those early years, one of Rosalynn’s best friends was Ruth Carter. Rosalynn knew Ruth’s brother, Jimmy, but not well. Jimmy, who was about three years older than Rosalynn, was attending the U.S. Naval Academy in Annapolis, Md. When Jimmy came home on leave, Ruth got Rosalynn to agree to date her brother. From that first date, Jimmy was smitten with Rosalynn.  That attraction did not subside but grew. Jimmy and Rosalynn fell deeply in love, and, after Jimmy graduated from the Naval Academy, he and 18- year-old Rosalynn Carter were married in the Plains Methodist Church on July 7, 1946.

Rosalynn Smith had always wanted to travel outside of the tiny town of Plains, but had never had the opportunity. After the wedding, Rosalynn got her chance to travel. The young couple left for Norfolk, Va., the base to which Jimmy was assigned. After they arrived in Norfolk, Rosalynn discovered that Jimmy would be out to sea for several days each week.

The young lady who had never been far from Plains had to learn to manage on her own.  At times, she felt overwhelmed, but she managed quite well and gained self-confidence. During the next seven years Jimmy and Rosalynn not only moved several times, but they also had three sons, Jack, Chip, and Jeffery. Jimmy was later received assignments in Connecticut, Massachusetts, Hawaii, California, and New York. Every move was hard, but Rosalynn loved every one. She got to be proficient at setting up a household while caring for three youngsters.

Jimmy advanced in his career and everything was going well for the Carter family when they received a message that Jimmy’s father, “Mr. Earl,” had died.  Jimmy decided without conferring with Rosalynn that he should go back to Plains and manage the family peanut business.  When he told Rosalynn, she was so upset that she cried and cried, but to no avail.  Jimmy’s mind was made up so they packed up and headed south. Rosalynn was so mad that she didn’t speak to Jimmy all the way back to Plains.

Once they were back in Plains, Rosalynn did what she had to do, but she was still not happy. Jimmy immediately got busy working at Carter Peanut Warehouse & Farm and talking with the farmers from whom he bought peanuts.

One day Jimmy asked Rosalynn if she would come and help out in the office. She reluctantly agreed.  Before long she realized that she enjoyed the work. She and Jimmy also got involved in community and church activities.

Rosalynn finally realized that she was enjoying living in Plains. Jimmy served on the local school board and became more and more interested in the political affairs of Georgia.   He decided to run for a seat in the state legislature. He lost the first race, but he ran again and won. While Jimmy was in Atlanta during the legislative sessions, Rosalynn successfully carried on the business. Jimmy served in the Georgia Legislature from 1963-1967.

In 1967, a big event occurred in the Carter family; their daughter, Amy, was born. The Carters were so happy to have a little girl.

After serving in the state legislature for four years, Jimmy decided to run for governor. After losing in one gubernatorial race, Jimmy ran again and won.  He became the Governor of Georgia in 1971. The family moved to the Governor’s Mansion in Atlanta. Becoming first lady of Georgia and managing everything there took all of Rosalynn’s ingenuity. It was so different from anything she had ever done, but she got the job done.

In 1976, Jimmy Carter, the almost unknown peanut farmer from Georgia decided to run for President of the United States. He worked hard to become the Democratic candidate for that office. They decided that they should campaign separately so they could meet more people.  Those two and their three sons traveled all over the United States seeking votes for Jimmy Carter. They stayed in private homes for two reasons—one, they didn’t have enough money to stay in hotels and the other is that believed they could learn more about the needs of the people by staying in private homes. They carried on successful grassroots campaign.

Jimmy Carter became the Democratic candidate and then won in the Presidential race.

After the inauguration in January of 1977, Jimmy, the 39th President of the United States, and his wife, Rosalynn, walked hand in hand down Pennsylvania Avenue to their new home, the White House. Moving into and getting organized in the White House was a bit easier for Rosalynn because of her experiences in the governor’s mansion.

From the beginning of the Carter administration, it became evident that Jimmy and Rosalynn would be partners just as they had been since their marriage in 1946. Jimmy asked Rosalynn to sit in on cabinet meetings so she would know what was going on in government.

The President even sent his wife on an official visit to a seven countries south of the United States.  She was to talk to the Heads of State about policy—this had never been done before by a First Lady and government officials were leery about how she would be received. Rosalynn studied hard before the trip, and she was graciously received in each country. The trip was a great success.

The Carter administration had its ups and downs.  The greatest success was negotiating a peace agreement, called the Camp David Accords, between the Egyptian President and the Prime Minister of Israel. The low point of the administration was when the Iranians took 52 Americans hostage. Mr. Carter worked the last 444 days of his administration trying to get the hostages freed. The President worked on the hostage crisis right through the campaign of 1980. Rosalynn and the Carters’ son campaigned nationwide while the President was holed-up in Washington, working on the hostage situation. Jimmy Carter lost the election. On Mr. Carter’s last day in office, the hostages were freed.

In 2021, Jimmy and Rosalynn Carter are both well into their 90s. They have been married 75 years and now see Plains, Ga. as a peaceful refuge.

Jimmy Carter recently said something to the effect that marrying Rosalynn was the best thing that ever happened to him.