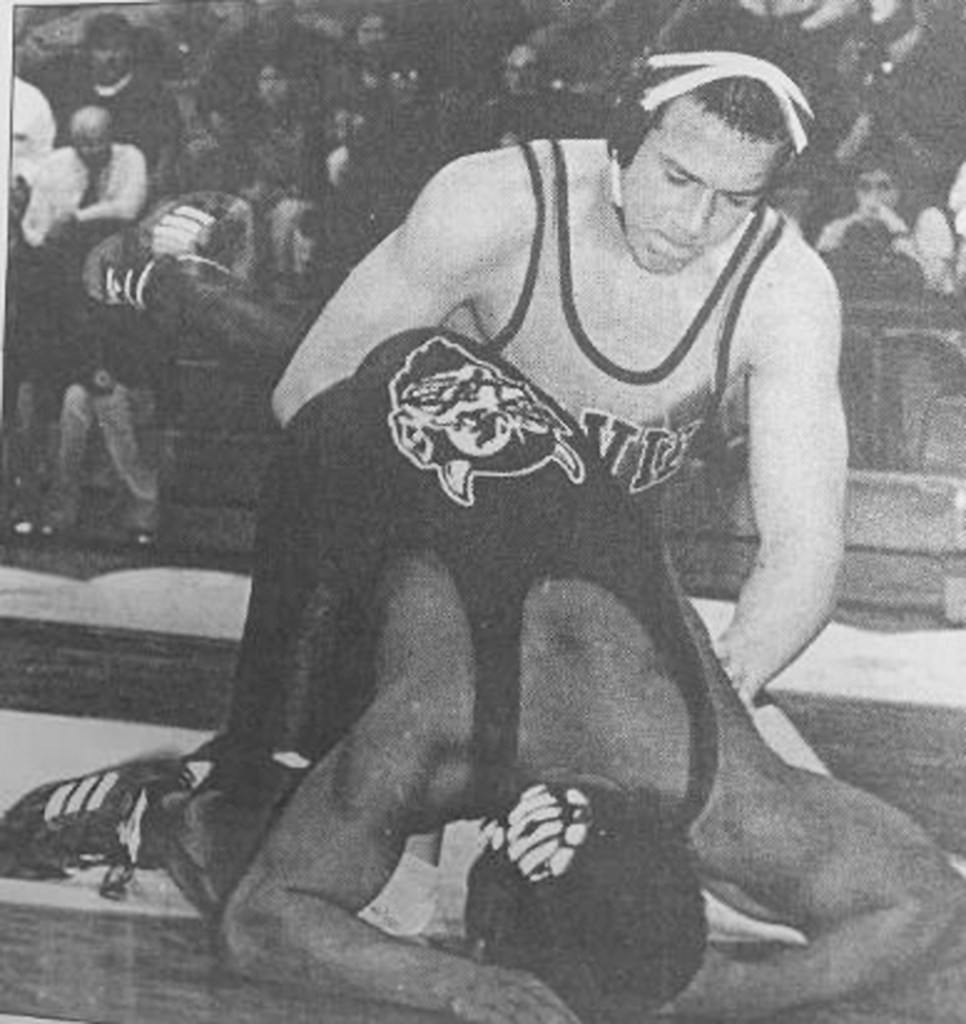 Eighth in a series on Davie’s all-time individual state champions.

When Davie senior Patrick Lowery faced Mario Paylor of Northern Durham in the 215-pound final in the 2002 wrestling state meet, it was no life-and-death matter. It was far more important than that.

Lowery’s first two trips to the state tournament ended on the doorstep on a state championship as he finished third at 189 as a sophomore and third at 215 as a junior. He lost three matches his sophomore/junior years, and two of them came at Independence Arena in Charlotte.

Talk about motivation as a senior. Lowery’s 215 rivals wanted to win, but Lowery had to. He had to have a crowning moment.  The mission was accomplished in the first period. Lowery steamrolled Paylor like a runaway train and achieved wrestling immortality.

“I can’t describe it,” Lowery said after ending his career with a 40-match winning streak. “It finally fell together. I said I wanted to dominate the rest of my matches, and I did that. I’m just lost for words.”

As a 1998-99 freshman, Lowery was no instant sensation. He was competing at 171. A freshman in the upper weights typically leads to considerable growing pains, and Lowery was barely treading water in December with an 11-9 record.

But his journey to the all-timer level began to take flight at midseason. He reeled off 10 of 12 matches, jumped to 11th in the Super 32 rankings and finished with a commendable 23-13 record. The late-season charge coaxed a half-smile from his coaching father, Buddy Lowery.

Despite being young, the 1998-99 War Eagles had an amazing run. A 24-match winning streak vaulted them to the state dual team final. They were heavy underdogs on the road against unbeaten and top-ranked Fayetteville 71st. The Falcons, which featured 10 in the Super 32 rankings and six number ones, were too much for Davie, rolling 50-13. But Davie, which set a program record for wins at 30-2, held its head high.

“If you would have told me we were going to be 30-2 on Nov. 1, I would have probably told you you were crazier than whale manure,” coach Lowery said.

Lowery rose to stardom as a sophomore, starting 17-0 with 13 pins. It took the top-ranked man in the Super 32 rankings at 189 to halt Lowery’s rampage. He lost 7-6 to a tree trunk from New Bern, George Rivers.

“He’s diesel strong,” coach Lowery said. “Patrick didn’t like it. He thought he made a couple mistakes that he usually doesn’t make, but he can learn from it.”

The War Eagles extended their Central Piedmont Conference winning streak to 40 and picked up their 13th regular-season title in 15 years. “The (win streak) was important to the three seniors and they didn’t want to be the ones that lost,” coach Lowery said.

In the state duals, Davie rallied for a dramatic 37-33 win over Watauga in the quarterfinals. When it bounced Independence 35-21, it had its fifth West Regional title in eight years.

Again, 71st was awaiting Davie in the state final, this time in Mocksville. And again, the Falcons were a juggernaut. Seven starters finished in the top four of the state the year before and four of them won state titles. Even though 71st had won 39 of 40, the score was 13-13 through six weight classes. Davie scared the daylights out of 71st before falling short 40-25. At 20-2, it was state runner-up for the second straight year.

Coach Lowery said: “When we came off, we wanted to be able to look ourselves in the mirror and feel good about ourselves. And every one of them could. We made (71st) wrestle. They had to wrestle hard.”

71st coach David Culbreth: “I was worried about coming here. It’s my first time to Mocksville and the turnout was fantastic. When a Davie guy won, let me tell you, I couldn’t even hear my coach beside me it was so loud. I knew their kids would be hungry after last year, and I’m really impressed.”

“I was trying to prove something,” Lowery said.

In the state meet at Independence Arena, Pack (125 weight class) climbed to the finals, where he put up a valiant effort in an 11-8 loss to a 47-0 star from Orange, Jermaine Hodge. The runner-up showing completed Pack’s 125-29 career.

Lowery reached the semifinals with a pair of first-period pins. His sterling work ran out of gas in the semifinals, where he lost 9-7 in overtime to Laney’s Jamell McLean, who went on to claim first.

“There isn’t anything I can think of that we could have done any different,” coach Lowery said. “The boy was built like (former Davie standout) JJ Rice – short and very explosive. I think Patrick was the first person to get a takedown on him all year.”

In the wake of the OT stinger, Lowery demonstrated admirable resolve, getting a 6-4 payback win against Rivers and pinning Adam Gagow, who came into the event with a 40-4 record. Lowery was the bronze medalist with a 39-2 record.

“It took a lot of heart to come back and beat George Rivers, somebody that had already beaten you one time,” coach Lowery said. “For a sophomore, he had an outstanding year.”

Lowery also accomplished remarkable things on the gridiron. The linebacker was named all-state in football as a junior. Two matches against East Gaston’s Matt Richardson during the 2000-01 season helped define Lowery’s run of wrestling dominance. Richardson was ranked No. 2 in the state at 215, but Lowery pinned him and took a 5-1 decision.

“That was supposed to be the match of the week,” coach Lowery said. “But it was like just another day.”

But the War Eagles still had plenty to cheer about. They went 24-4 and advanced to the state quarterfinals for the 11th time in 12 years despite only having one senior (Tony Angell) in the lineup.

“They go out there and hug the mat,” coach Lowery said. “He just takes his time and does what he wants to.”

In the Midwest Regional at East Forsyth, Lowery capped a romp to first place with startling ease, a 12-3 major decision over Scotland County’s Akeem Hale, who was 39-0. This made Lowery 45-0 with 32 pins. He repeated as the tournament’s most outstanding wrestler.

“I thought it was going to be a lot tougher than what it was,” he said of the match against Hale. “I was just looking to get one takedown. He kind of quit.”

At Independence Arena, Lowery received a bye before winning by major decision. There seemed no stopping Lowery, who had won 85 of 87 and 48 straight.

It was monumental angst for Lowery, who was a repeat bronze medalist with a 50-1 record. The Lowery-Grasty match seemed like a classic case of the wrong side winning.

“No one has ever been more disappointed with a 50-1 record,” coach Lowery said. “The only way he was going to come out feeling good was to be a state champion. There’s a lot of people that would have loved to have been 50-1. The only thing is that one loss came at a bad time.”

After seeing his long winning streak die, Lowery pinned, rolled to an 18-3 technical fall, pinned and pinned. Isn’t that how special athletes respond in these situations? While Lowery regrouped to take third, Stanley (43-9 record) and Kahrs (40-9) finished fourth and Scott got fifth.

“If you get down to it, Patrick would have been a big 189-pounder if he didn’t want to play (college) football,” coach Lowery said. “Some of those boys were a little bit bigger. They didn’t know as much, but sometimes they just get you. But that isn’t an excuse. He kicked a lot of butt.”

As a senior, Lowery’s football honors piled up. He made All-Northwest and all-state for the second time. He played in the Shrine Bowl. He accepted a scholarship to N.C. State. He missed the first six wrestling matches because of football stuff.

Lowery was everything as an athlete – a thinking man, a supreme talent, a grunt worker. And after experiencing terrible luck the previous two years at Independence Arena, he wore a glare that could wilt flowers.

Against East Gaston, he bumped up to heavyweight and pinned an opponent who was 28 pounds heavier. That sealed a 35-33 Davie win and gave Lowery the career lead in wins (127 and counting) as he passed Adam Connor.

Ryan Boehm would become a state champion down the road, but he was a freshman in 2001-02, and he had to see Lowery every day in practice.

“We don’t have too many guys to wrestle, so I get Patrick,” Boehm said. “It’s normally a beating. I know what Billy (Riddle) went through last year.”

The War Eagles reclaimed first in the CPC, making them 91-3-1 all-time in the league, and rose to a record-breaking 32 victories. They lost to Riverside in the second round of the state duals and finished 32-3.

They won 106 of 117 dual matches during Lowery’s career. His entire senior year was a smoothly paved expressway. He collected his third Midwest Regional title at East Forsyth. Five more finished in the top four to qualify for the state: Stanley (135), Black (171), Kahrs (140), Garner (145) and Sain (152).

At Cricket Arena in Charlotte, Stanley finished third in the state after suffering an absolutely brutal 1-0 loss in the semifinals. That wrapped up his 40-6 season and 133-36 career.

But the story was Lowery’s attempt to break through when it mattered most. In the first round, he pinned in the second period. Then he pinned in the first. In the semifinals, he faced Hoggard’s Derek Brunson, who had Popeye arms and a 48-10 record. Lowery major decisioned him 20-7.

“Man, that dude was strong,” he said. “He’s just an athlete and those are the ones that scare you – even if you’ve wrestled 10 years – because they can throw you on your back and it’d be over.”

In the 215 final, Lowery took down Paylor quickly. When the referee slapped the mat, coach Lowery and assistant Matt Wilson exhaled in relief. Then son and father embraced in a bear hug. The moment cemented his lore amongst Davie’s all-time greats.

Paylor, who finished 36-10, took a back seat to no one in his respect for Lowery. “It’s my senior year, but he’s No. 1 and he deserves it,” he said. “He worked hard for it. I knew he was hungry the whole year, so he wanted it more than anybody else. I lost to one of the greatest guys you could lose to. No shame in that at all.”

After being unlucky, after twice coming oh so close, the cowboy got the girl when the credits rolled.

“I feel completely at ease,” he said. “Everything I set my mind on to accomplish is done. After football, this was the last thing I needed to mark off my list, and I feel at peace now with my career. That was a perfect ending.”