Heiny was a swimming genius 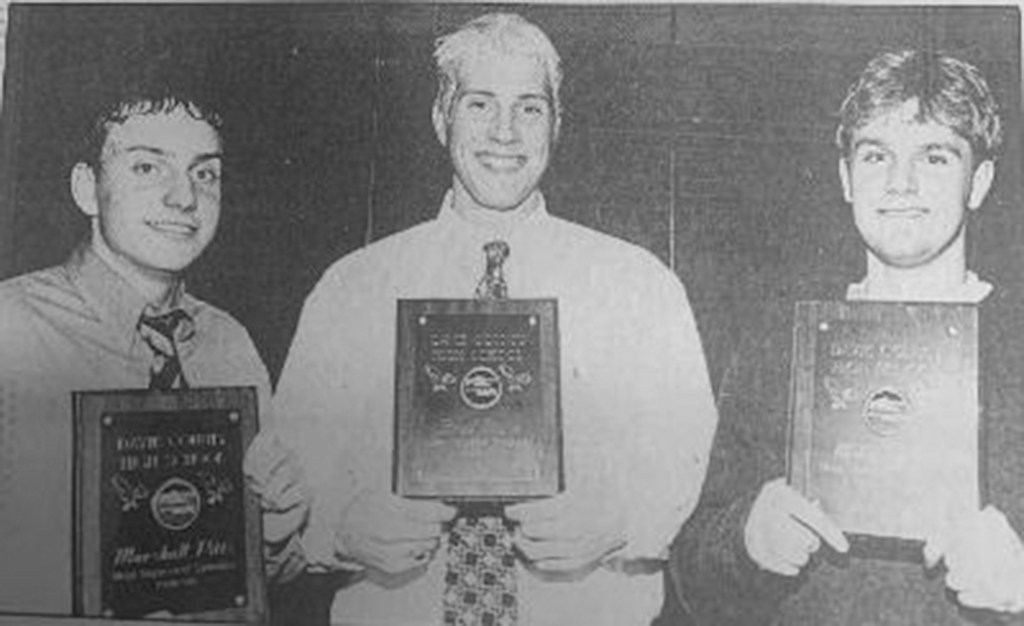 Sixth in a series on Davie’s all-time individual state champions.

Heiny’s barrage during the 1995-96 season was all the more amazing considering this was his – pause for emphasis – freshman year.

Nobody from Davie swam the way Heiny did – not before and not since. He won two 4-A state championships during his career, putting him in robust company. The other War Eagles to win multiple state titles are Scotty Spry (three in wrestling), Neil Cornatzer (two in wrestling), Michael Waters (two in wrestling) and Anna McBride (three in track).

Heiny stands alone as the only War Eagle to claim first in the state as a freshman.

Heiny grew up in Poway, Ca., near San Diego. At age 10, he was swimming the 100 backstroke in one minute, eight seconds. His family moved to Advance when he was 12.

The 1995-96 season was the Davie swim program’s fourth year of existence. Tim Rambo was a first-year coach who witnessed the birth of a legend.

“He is a tremendous swimmer,” Rambo said then. “He has great technique. He is excellent for his age. He is an excellent swimmer – period. Mike is extremely dedicated.”

Heiny worked tirelessly at his craft, driving to Winston-Salem every weekday morning for a practice session that ran from 4:30-7. After school, he headed back to Winston. On top of that, he was an A student.

After the War Eagles finished third in the CPC behind West Forsyth and Mt. Tabor, they charged to fifth out of 28 teams in the West Regional in Charlotte. Heiny captured the 500 free, placed second in the 100 back and helped Brad Clark, Lamonds and Powell take second in the 400 relay.

“I was pretty excited,” Heiny said. “I was not expecting to do that well in the 500. There was pretty strong competition.”

It was a superb showing for Davie as a team. It placed ninth – tying league-rival West Forsyth – out of 51 schools.

Powell said: “With everybody coming back, we should win the conference next year. And we could possibly finish in the top five (in the state).”

Rambo: “It was a great way for the guys to end the season. They got rewarded for hard work.”

The 1996-97 season was a golden one for the Davie boys, who had a new coach in David Rondestvedt. The nationally-ranked Heiny missed the first meet of the season because he was competing in Texas, but he was back in time to help the War Eagles defeat West Forsyth for the first time in history.

Rondestvedt only had nine male swimmers, but most of the ones he had were formidable.

“He deserved the honor for sure,” Rondestvedt said. “He’s the only swimmer in the conference that I know of who hasn’t lost a race. He’s awesome.”

In the West Regional at the Mecklenburg Aquatic Center, Davie made its presence known with a fifth-place finish and 159 points. Providence (304), North Meck (284), Myers Park (187) and East Meck (181) were the only teams to outscore Davie, which beat West Forsyth by 31.

“We beat West, Page, Grimsley, West Charlotte, Mt. Tabor,” Rondestvedt said. “The teams that beat us, we can’t compete with them, not with the amount of swimmers we have.”

“He had to do a bunch of swimming the night before at the Winston-Salem YMCA, so he was a little tired,” Rondestvedt said.

“Heiny was way off his pace in the 500 free, which was too bad,” Rondestvedt said.

A year later, glory would return for the Davie superstar.

For new coach Ben Allred in 1997-98, it was a joyful thing to inherit a team with massive talents like Heiny and Clark.

“It’s just awesome watching those two swim,” he said of the juniors. “They are just incredible. I’ve just never seen anybody swim like that.”

The duo swam laps in the mornings at the Winston-Salem Lake YMCA. They would do the same thing after school.

Even though the War Eagle boys only had seven swimmers, they finished third in the CPC meet at Winston-Salem State. Davie (55) trailed West (96) and Reynolds (85).

Heiny swept first in the 500 free and 100 back in the regional in Hillsborough, and the ninth-place War Eagles topped Tabor and West Forsyth.

“It was a great showing,” Allred said.

In the CPC championship meet, the spotlight belonged to Clark, whose magnificent performance earned him co-swimmer of the year with West Forsyth’s Brad Willard. Clark won the 50 free (23.3) and the 100 breast (1:07.61).

Heiny was the victim of a major upset in the 500 – Reynolds’ Ryan Cooper dealt Heiny his first ever CPC loss in that event – but he still racked up league titles in the 200 IM and 100 back.

In the Midwest Regional in Hillsborough, Heiny erased the bitter memory against Cooper, winning the 500 free as well as the 100 back.

Now Heiny was a three-time regional champ in the 500 and a two-timer in the 100 back.

“Mike was ahead by three seconds every lap,” Allred said. “Mike said he was going to take care of (Cooper).”

In the state meet, Heiny finished fifth in the 100 back and sixth in the 500 free. Clark produced his best-ever time in the 50 free (22.59), but it was only good for ninth against fierce competition.

Murillo was a legendary sprinter for War Eagles