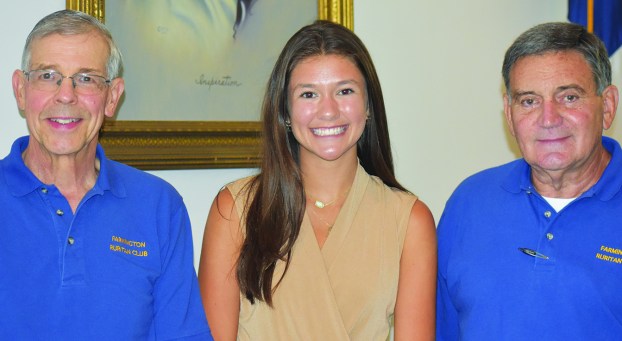 Farmington Ruritans gun raffle is back

Davie football coach Tim Devericks has 12 assistant coaches. When the War Eagles had their first official practice on Monday, there was – unfortunately – an extra “coach.”

Camden Beck, an indispensable cog for Davie on the offensive line, is sidelined while recovering from a knee injury.

“I help with film at practice,” Beck, a senior, said. “I’ve been at every practice, staying involved and helping the new guys.”

Beck has been a cornerstone up front throughout his career, starting at left tackle on varsity during his first three years of high school.

But in the fifth game of the 2021 spring season, a wild 53-46 loss at Glenn, Beck went down. The injury happened during an interception return by the Bobcats. Beck was pursuing the ball carrier.

“He blocked me in the back and the knee turned funny,” he said. “Something like that happened in the Reynolds game two weeks before. I knew it was worse than the Reynolds game, but I didn’t think it was as bad as it was.”

The grim diagnosis: Torn ACL and torn MCL. Beck had surgery April 14. He had to miss the final two games of Davie’s 5-2 season.

“They said the usual ACL recovery for an athlete is 6-9 months,” he said. “I’m shooting for six.”

Beck will certainly miss the first five games this fall. He will likely miss the sixth against Mt. Tabor on Oct. 8. He’s aiming for a return on homecoming against archrival West Forsyth on Oct. 15.

But nothing is a given when it comes to ACL tears. Beck could miss the entire season. But he’s giving it everything he’s got to get back for at least a few regular-season games and hopefully a playoff run.

“(West Forsyth) is always a fun one with the rivalry we have, and that would be the day after six months since surgery,” he said. “So it would be awesome to get back for that.”

Right now he’s enduring a tough rehab. In the meantime for Davie, replacing Beck won’t be easy. Right tackle Spencer Williams won’t have his longtime opposite bookend for a while. The good news is Beck feels like he’s on pace for the best-case scenario – a return in six months.

“At first it was super boring, not much stuff other than leg lifts,” he said. “I’m starting to get into the muscle-building phase and the cardio. So it’s starting to get hard, but it’s fun coming back.

“I go to AWARE (Physical Therapy) in Advance two times a week, but I also try to get in the gym and do legs two times a week by myself. They tell me I’m right on schedule and doing good.”

“No. 1, he’s an extremely hard worker,” Devericks said. “He wants to get everything right. He wants to make every block, pick up every blitz and make sure everything is right. When kids are willing to work that hard at their craft, they’re a pleasure to coach. Ivy League and D-II schools are definitely interested in him.”