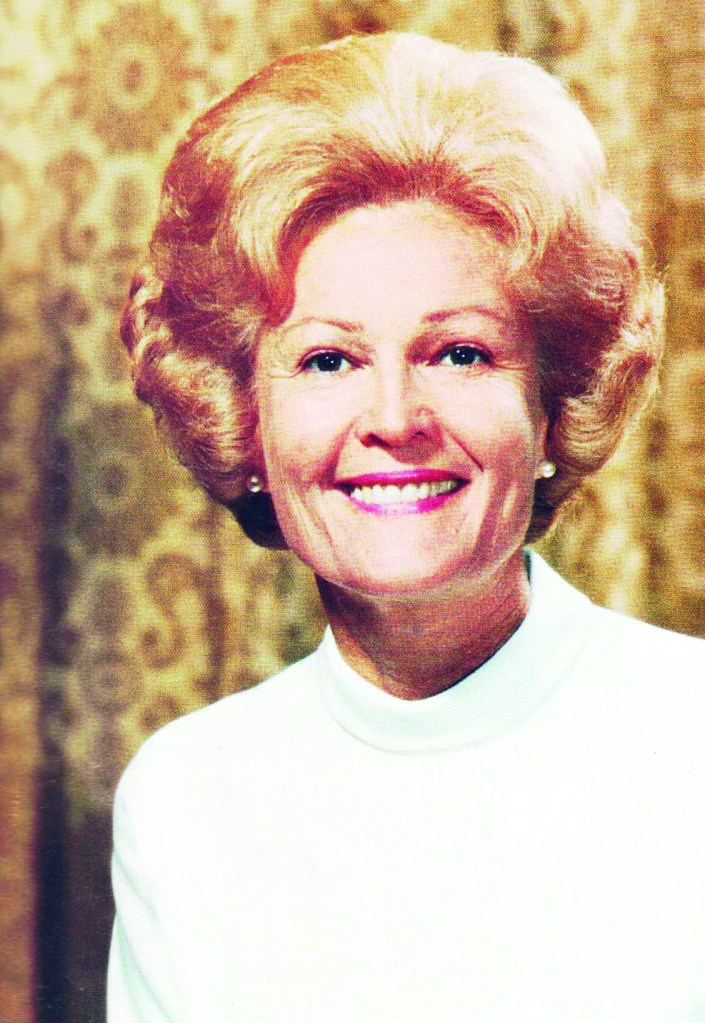 One writer characterized the life of Pat Nixon, the wife of the 37th President of the United States Richard Milhous Nixon, as having a tragic dimension.

After, you, the reader, have read the story of Mrs. Nixon’s life, you decide if tragic dimension is the correct way to describe the life of Thelma Catherine Ryan Nixon.

A baby girl, Thelma Catherine, was born to Kate Halberrtstadt Bender Ryan and William Ryan, a coal miner, in Ely, Nev. on March 16, 1912, the day before Saint Patrick’s Day. Her father called her Pat, “his St. Patrick’s Day babe.” Years later, Thelma had her name legally changed to Patricia, but she was usually referred to as Pat. Mr. Ryan gave up mining and moved his family to a farm in California where Pat and her two brothers worked hard.

Tragedy struck the Ryan family when Pat was 13.  Mrs. Ryan died, and the family’s teenage daughter had to become the caretaker of the family in addition to helping on the farm. That daughter, Pat, was determined to get an education so she continued to go to Excelsior Union High School while she carried the load at home.

When Pat was 18, her father died, but nothing happened that could deter Pat from her goal of getting an education. She enrolled at the University of Southern California where she paid her own way by working a number of jobs. Ambitious Pat, not only graduated from The University of Southern California, but she graduated with honors. Pat Ryan never seemed to complain about having to work hard. She is quoted as saying she did not know what it was not to work hard.

After graduating, Pat got a job teaching at Whittier High School. She got involved with a community theater group, and it was there that she met Richard “Dick” Nixon, a recent graduate of Duke University Law School. Dick was attracted to the beautiful redhead. He said that he was going to marry her someday. According the book, “First Ladies Who Called the White House Home” by Beatrice Gormley, Pat thought the young lawyer was “nuts or something.” Pat was finally won over—she was impressed by Richard’s hard work and determination as he was getting his law practice established. The beautiful redhead finally said, “Yes” to Richard’s proposal. The young couple was married on June 21, 1940. Pat was 28 and Richard, who was born in 1913, was 27. The Nixons settled in Whittier, Calif. where Pat continued teaching and Dick practiced law. On Dec. 7, 1941, the Japanese bombed Pearl Harbor, and life changed for the Nixons as it did for many others in this country. Richard joined the Navy, and Pat went to work for the Office of Price Administration.

Dick was discharged from the Navy, and, in 1946, he decided to run for Congress. The Nixons first daughter, Patricia, called “Tricia,” was born the same year, but Pat did not let that hinder her from working in Richard’s campaign office.  Richard won that first election, and the Nixons moved to Washington. Two years later, the Nixons second daughter, Julie, was born. Even with two children, Pat continued to help Richard in his endeavors.

Mr. Nixon’s political career advanced quickly. He served in the House of Representatives and then in the Senate. Pat worked in his campaign office and traveled with him as he campaigned, even though she did not enjoy it.

Mr. Nixon was chosen to run as vice president with Presidential candidate Dwight D. Eisenhower.  Pat hated the idea of a national campaign, but, as usual, she did what was expected. She traveled with her husband as he campaigned and always kept a smile on her face. Even though the Nixons were busy, they were always devoted parents.

As the wife of the vice president, one of Pat’s dreams was fulfilled. She had always wanted to travel. When she was young and single, she agreed to drive an elderly couple in an elderly Packard across the United States just so she could see the country—the couple just paid her enough to pay for her to buy a bus ticket back home.  Pat was no doubt pleased when the President sent the vice president and his wife on a Goodwill tour through a number of countries. Pat, the lady with a pleasing personality, made a good impression everywhere they went. She even kept her cool when their car was attacked in a South American country.

After serving as vice president during President Eisenhower’s two terms, Mr. Nixon announced his candidacy for the Presidency in 1960. Pat was not happy about her husband’s decision, but, as usual, she helped in every way she could. Richard Nixon lost that election to John F. Kennedy. Pat was disappointed because they had worked so hard, but she was relieved to return to private life. Mr. Nixon just would not give up politics: in 1962, he announced that he was going to run for the office of governor of California. Mrs. Nixon burst into tears when he made that announcement, but, as usual, she manned up and helped as he husband campaigned for that office.  Again, Mr. Nixon lost. A bitter Richard Nixon made a speech, known as “the Checkers speech,” in which he said, “You won’t have Nixon to kick around anymore.” The Nixons moved to New York. Once again Mr. Nixon began practicing law.

In 1968, the press did “have a Nixon to kick around” because Richard decided “to throw his hat in the ring again.” He was chosen as the Republican presidential candidate to run against Hubert Humphrey. Pat campaigned with Richard with a smile on her face even though she hated it. Because she smiled through thick and thin, some people began to call her “Plastic Pat.”  Actually, she was just doing what she had to do as Richard Nixon’s wife. Nixon won that election, and the family moved into the White House. Pat was a popular First Lady. She graciously welcomed thousands of people to the White House and continued the restoration of the White House which Jackie Kennedy had begun.

Nixon was popular and was expected to be elected to a second term, but for some reason he seemed to have developed a dark, secretive side. Maybe it had always been a part of his personality, but it just began to be revealed during his second term.

There was a break-in at the Democratic National Headquarters at the Watergate, to which the President was accused of being connected. Hearings began and one man testified that the President had a secret taping system in the White House. The committee subpoenaed the tapes. The President resisted, but he finally released bits and pieces of the tapes; his language (cursing), his rants against certain people, and other information on the tapes were unbelievable.

Life for Pat Nixon must have been almost unbearable, but she said nothing.  The people around Mr. Nixon advised him to resign because they believed that he would be impeached. Ever the faithful wife, even in the troubled days of the Watergate investigation, Pat Nixon said, “I love my husband, I believe in him, and I am proud of his accomplishments.”

Pat wanted him to fight, but President Nixon finally took the advice of cabinet members and other advisors and resigned when impeachment seemed certain.  As the Nixons boarded the aircraft on which would take them on the first leg of their journey to California, Mr. Nixon’s expression remained defiant, and Pat remained stoic to hide her shame and pain.

In 1976, two years after they returned to California, Pat Nixon had a stroke which left her partly paralyzed. The Nixons moved to New Jersey to be closer to their family. Pat’s grandchildren brought her great joy. The Nixons’ daughter, Julie, married the Eisenhowers’ grandson, David, in 1968.

Patricia “Pat” Nixon died in 1993 from lung cancer. She was buried in the garden of the Richard Nixon Library in Yorba Linda, Calif. Her husband died about a year later and was buried beside her there.

Was “had a tragic dimension” a correct way to describe the life of Patricia “Pat” Nixon?