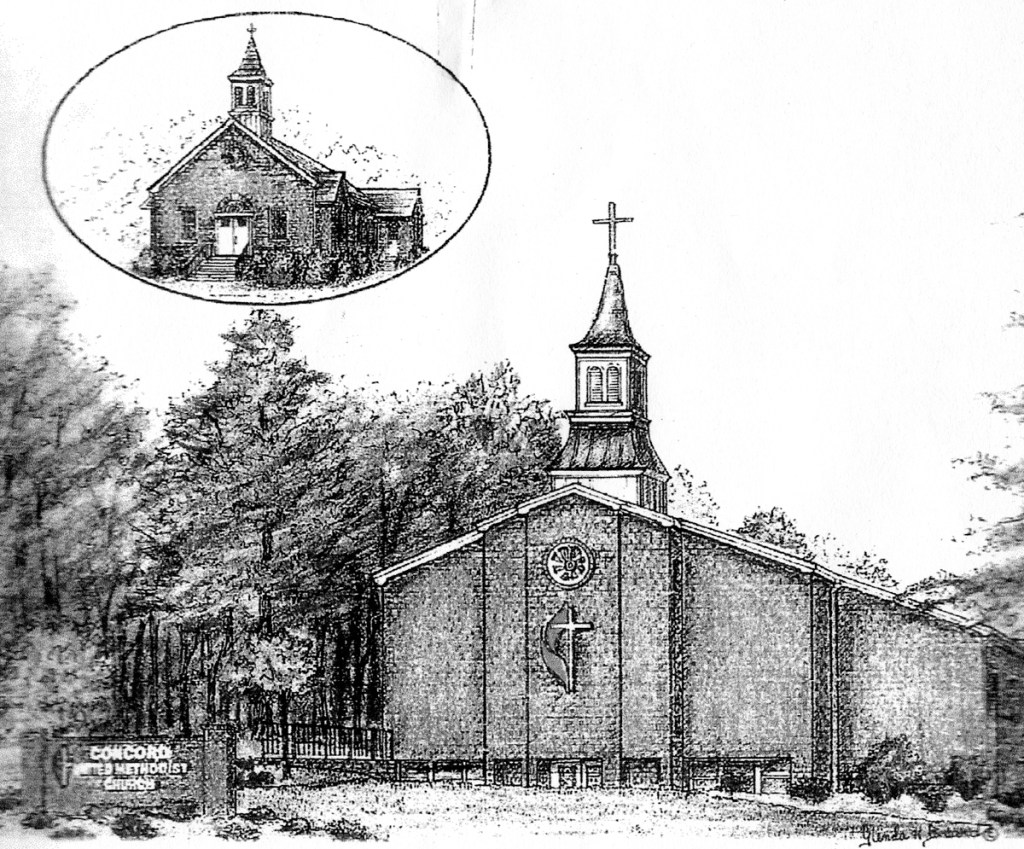 By Marlene B. Shamel

Concord United Methodist Church in Mocksville will celebrate its 175th anniversay on Aug. 1.

This church is a member of the Yadkin Valley District of the Western North Carolina Conference of the United Methodist Churches. With a rich history of sharing the gospel and helping those in need, Concord UMC continues to build upon its strong foundation.

The United Methodist Church is a 12-million member strong global church that opens hearts, minds and doors through active engagement with the world. The mission is to make disciples of Jesus Christ for the transformation of the world. The UMC can trace its heritage back to the movement begun in 1729 in England by John and Charles Wesley.

Concord will revisit its heritage that began in 1845 with a special homecoming service this Sunday.

The faith community in which Concord now stands was Lutheran up until the late 1740s. One of the largest and most influential families at that time lived in the area and owned the land upon which the current church was built. This family, the “Klucks,” changed the spelling of their name to “Clicks” in an effort common among the early German settlers to anglicize their names after the Revolutionary War.

Daniel Click, the third child of Nicholas Click Sr., had 10 children, six sons and 4 daughters. It was his daughter, Mary Magdalene, who did not believe in a religion that could only be gotten through a catechism. She remembered the words of an old Negro preacher when he said that “you must have a heartfelt religion or you will not get into heaven.” Mary truly believed these words.

It was Joseph Wells Hodges, a fine looking young man, 6 feet tall, who stole her heart and asked her to marry. She gladly accepted, not because of his manly traits, but because it was said that he was a Methodist class leader, led prayer meetings and was a Sunday School Superintendent.

Young Hodges and his bride went to live on a plantation he had in the Northeastern pat of the county. After one year, Mary Magdalene’s father, Daniel, encouraged them to move back near the Click family. He deeded 200 acres of land to the couple. In their new home, this young couple erected a family altar and by a “godly walk and a pious conversation,” the entire Click family joined the Methodist movement within two years, except for the father, Daniel.

This large Click family desired to form a Methodist Church organization. Young Hodges and Mary Magdalene led the way to establish a Society. Meetings were held at the public school house, Concord School. The school house was built by the Click family on their large plantation for its children. The first teacher at the school was from Concord, the capital of Cabarrus County. Thus, the school and the church ended up having the same name. Concord Church was organized in 1846.

J.W. Hodges often told his wife, Mary Magdalene, that he hoped a church building could be erected in the community. He chose a site for the proposed church and it is the current site of Concord United Methodist Church. He wanted to donate the land and help to construct the building; however, he died before his dream could be accomplished. It was his wife who fulfilled that dream. She gave 8.3 acres of land to the trustees of the church. The building was completed in the spring of 1861 and dedicated by the presiding elder, the rev. Dr. W.H. Bobbitt.

In 1946, the Rev. G.W. Fink appointed a building committee for the purpose of building a new brick church which was to take the place of the former wooden building. The Rev. J.B. Fitzgerald became the new minister and with W.R. Davis and S.D. Daniels, they led the building project. Also in 1946, the ladies circle, know as the United Methodist Women today, was organized through the efforts of Mrs. Dewey Angell.

In 1950, the first Vacation Bible School was held by the Rev. J.B. Fitzgerald. The three teachers were Carrie Tutterow, Otta Davis and Rev. Fitzgerald. In 1954, with W.R. Davis leading the way, an educational building was built. The building had six classrooms, two bathrooms, a large fellowship hall and kitchen. The dedication service was held in a955. In 1956, the United Methodist Men’s group received its charger. In 1962, a recreation building was built by the men of the church with Sid Smith in charge of the construction.

In 1978, under the leadership of the Rev. Kenneth Eller, ground was broken for a remodeling project that included four new classrooms, four bathrooms, a narthex, and some remodeling within the sanctuary, educational building and courtyard. In 1980, the Rev. Phillip Cole reorganized the building committee to finish the remodeling project with Lester Dwiggins as chair. Three new classrooms, a choir room, a large meeting room, plus eight new pews and a new altar area were completed. In 1985, the new sanctuary and educational wing was dedicated by Bishop Bevel Jones with the financial note being burned during the service.

During the past 175 years, th leadership and guidance of committed ministers and church members has led the congregation to achieve a spirit of Christian good will and fellowship that should help the church survive and continue to respond through prayer and the stewardship of its time, talents and monetary means to support various mission projects. A continuous, year-round program of mission projects has kept the congregation better informed, more knowledgeable and more motivated to support the mission outreach of the church.

The members of Concord United Methodist Church strive daily to make disciples of Jesus Christ by witnessing though word and deed to those who have not heard or heeded the gospel of Jesus Christ. The members have been called to work with others in their desire to grow spiritually, to worship, to witness and to serve those in need. The membership has been challenged to help initiate, strengthen and support ministries that address the spiritual, physical emotional and social needs of people around them. Plus, the members are called to seek justice, freedom and peace for those who are oppressed by unjust economic, political and social systems in programs that seek to build just, free and peaceful societies.

Whether it’s a major disaster, a community emergency, a hungry child, a homeless family or support for a missionary … the membership of Concord United Methodist Church continues to send God’s love right into the heart of the crisis.

The future for Concord United Methodist Church will definitely depend upon its membership. The commitment is there, the desire it there, the dedication is there, the strength is there and the power is there to do and accomplish great things in the name of Jesus Christ.