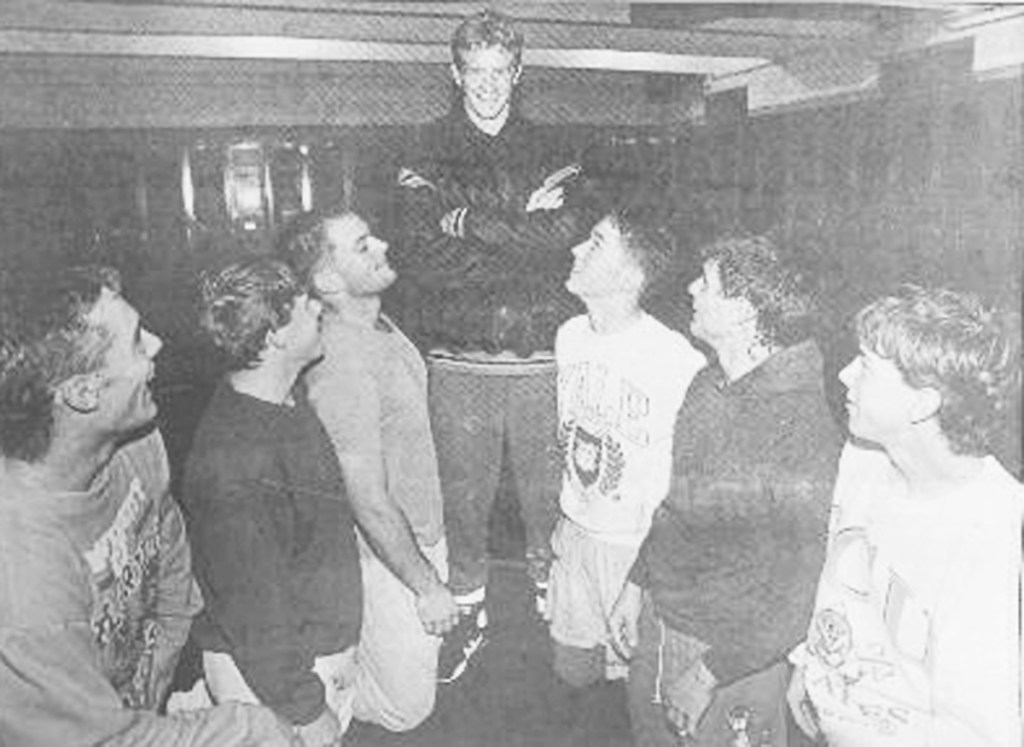 Third in a series on Davie’s all-time individual state champions.

As a sophomore wrestler, Jon Ward carved out a 34-9 record. As a junior, he was named the Midwest Regional’s most outstanding wrestler, he finished third in the state at 125 pounds and he finished 30-2.

But he was hugely disappointed when he left the Greensboro Coliseum at the end of that 1991-92 season. That’s because he stubbed his toe in the first round, getting upset by Pinecrest’s Andy McMillen.

“It was a shock,” Ward said then. “I went out looking ahead to the guy from Laney. I didn’t say a word all day. I was mad at myself.”

“He should have been first,” coach Buddy Lowery said. “He was the best wrestler at 125. Shoot, he came back through the consolation and dominated everybody. You put a year’s time into it and then have your balloon popped and it hurts.”

Motivated by that first-round loss, Ward entered his senior season with white-hot energy. “This year I won’t be overlooking anybody,” he said.

The McMillen setback proved to be the second-to-last loss in Ward’s career. He made amends in 1992-93 and climbed to wrestling’s mountaintop, just like Scott Beauchamp, the first state champion from Davie’s wrestling program, did four years earlier.

“He’s a lot like Scott Beauchamp,” Lowery said. “He doesn’t moan and groan. He just drills hard. He has so much mat sense. He just outthinks guys. He’s just as good as anyone we’ve had here.”

The War Eagles opened the season with a 57-10 belting of West Mecklenburg. They won the King of the Mat at North Davidson for the 10th time in 12 years, shaving runner-up East Gaston by five points. They went 5-0 in the Davie Duals, the closest margin being 27 points. They smacked Central Davidson 53-21. They claimed the Statesville Invitational, outscoring East Gaston by 14.5 points. After pounding Wilkes Central 55-10, they were ranked No. 1 by Mat News despite having 10 freshmen/sophomores in the lineup.

After absolutely destroying Central Piedmont Conference competition for six straight years, Davie failed to win the league for the second year in a row. It lost 28-25 to South Rowan. After smothering Parkland 50-10, it watched Mt. Tabor rally for a 29-29 tie. Davie thought Matt Sain had his opponent pinned, but the referee did not slap the mat. Sain would lose a major decision. Instead of Davie taking a 26-6 lead, it was 20-10 and the match would end in a tie.

“Sain had him stuck in the first period,” Lowery said. “He had him in a cradle. He was pinned.”

Then came the state duals. In the 4-A championship match, Davie and Cary locked up in a classic battle. The visiting War Eagles appeared ready to win their first state title when they produced leads of 19-0 and 22-3. At 130, Ward whipped a 32-2 opponent, winning 11-3 over Chris Rivera.

But the Imps stormed back and won 26-22. Davie was exasperated. It was hard not to feel snakebit. A controversial stalling call at 189 was the difference in the outcome.

“I don’t know what to say to them,” Lowery said. “We wanted to win. There were just some questionable calls.”

The Midwest Regional was held at Watauga. After winning five of the previous six regionals, Davie finished second, barely losing to Tabor, 144.5-140.5. It was the Spartans’ first regional title.

A week later at the Greensboro Coliseum, Davie finished second again. Spry won the state at 119 as he closed his sophomore season at 31-2. (He would become Beauchamp/Ward times three in 1995.)

In the semifinals, Ward found himself against a familiar foe, McMillen. It was tied after two periods and McMillen was on top to start the third.

“I was worried,” Ward said. “He’s real quick. He could take me down practically any time. He was taking me down and letting me up.”

But McMillen made a critical mistake. “He let me go right off the gun,” Ward said. As a result, Ward had a 5-4 lead. He would win by that score.

“I just basically blocked him off,” he said. “He didn’t take me down again.”

In the finals, he faced Freedom’s Patrick Abernathy, who lost 13-2 to Ward in the regional. Ward won 11-7. It was drama-free. In fact, Abernathy was lucky to be around in the third period.

“That boy was stuck,” Lowery said.

Ward closed his glorious year with a 35-1 record, the only loss early in the season to East Gaston’s Darrell Stewart, who finished third in the state at 135. He was the CPC Wrestler of the Year and left with an eyeball-popping career record of 99-7.

“They’re so much alike, it’s scary,” Lowery said of Ward and Beauchamp. “Both were third in the state as juniors. Both won the state as seniors. Neither will say more than 10 words during the season. Both just get the job done and have fun.”