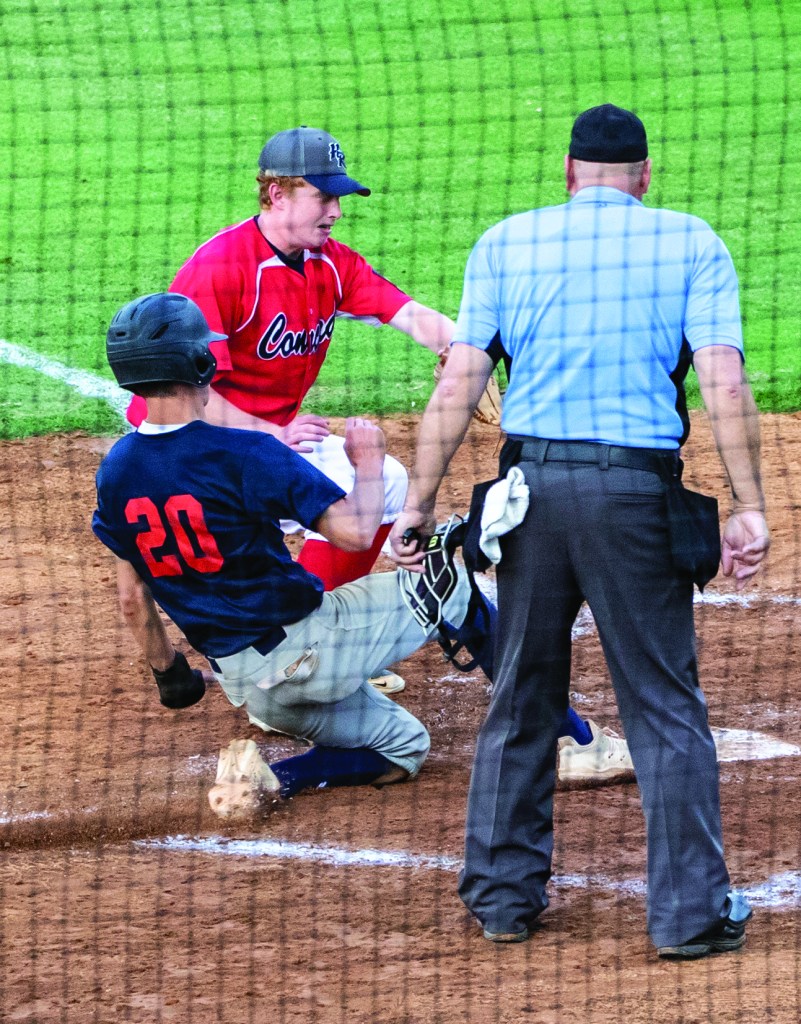 West Rowan finally cracked in the seventh inning, and Kason Stewart, Jacob Leonard, Colt Wright and Carson Queen made the difference at the end as the Mocksville Junior Legion baseball team knocked off visiting West Rowan, 3-2, on July 10.

What made the victory all the more thrilling is Post 174 overcame an opponent that would finish the season with a 16-5 record. After losing five of six, Mocksville (6-6) picked up its second win in a row.

Both starting pitchers were tremendous. Gavin Maines went six innings for Mocksville, not allowing an earned run. West’s starter held Mocksville to one run on four hits for six innings.

“It was a well-played game,” coach Tim McKnight said. “It was a pitchers’ duel. The kid they threw didn’t throw real hard. It was slow, slower and slowest. But he changed speeds really good and stayed down in the zone. It seemed like the balls we hit right on the screws, we hit right at somebody.”

Mocksville got on the board first. Kason Stewart was hit by a pitch and was at second with two outs when his older brother stepped to the plate. Caleb Stewart drove one to the grass, the outfielder failed at a diving attempt and Caleb ended up with a triple.

Mocksville’s lead disappeared in the fifth, when West took advantage of two breaks. Maines was hurling a three-hit shutout before a West player slide into third with a triple. McKnight wasn’t buying the call.

“Bentley (Moody) tagged him on the shoulder,” he said. “I thought he got him, but the umpire said the hand was in.”

Maines nearly wiggled out of it without allowing anything. He sandwiched a strikeout and popout to second baseman Queen around a walk. With runners at second and third, a fly ball was sent down the right-field line. It dropped, the umpire called it fair and two runs scored. It went down as an error.

“We dropped it on a full sprint,” McKnight said. “Our player was in fair territory but I thought the ball was foul.”

Mocksville failed to answer in the fifth and sixth, but it staged a dramatic rally in the seventh. West lost its mojo when it went to the bullpen. K. Stewart greeted the reliever with a two-strike single.

“I think Kason’s going to be a pretty solid player,” McKnight said of the rising freshman. “He plays a really good first base for as young as he is. His baseball IQ is pretty good and he swings a decent bat.”

McKnight decided to give Leonard the bunt sign. It couldn’t have worked out any better, Leonard winding up with a hit. A throwing error on the play moved K. Stewart, the tying run, to third.

“I said: ‘I don’t know what kind of bunter Jacob is, but I’m going to take a chance,’” McKnight said. “He bunts right out in front of the plate. The fielder tries to go to second, throws off his back foot and throws the ball into center field. Jacob gets to first and tells (Mike) Dinkins: ‘I’ve never done that before.’”

West got the first out on C. Stewart’s grounder to second, but his brother scored on the play to tie it at 2. Then Wright came through with a single that put runners at first and second. Two pitchers later, Queen delivered in walk-off style, his single scoring C. Stewart.

“They go out to talk,” McKnight said. “Carson comes over and I said: ‘I don’t think I’m going to bunt here.’ He said: ‘I thought you were going to bunt me.’ Carson has been swinging the bat. He is going to make contact. He gets just enough of it to get it over the shortstop’s head. I mean, he couldn’t have walked out there and dropped the ball any better than he did. He hit it in no man’s land.”

Queen was the final hero, but give huge credit to Maines, who pitched superbly for the second straight outing. In a 4-2 win over Kannapolis on July 3, he lasted 5.2 innings, allowed two unearned runs and struck out eight. This time he walked one and fanned five in a five-hitter. That means he hasn’t allowed an earned run in 11.2 innings across two starts.

“Gavin pitched a really good game,” McKnight said. “It was hot and humid and he just ran out of gas (in the sixth). He’s a good little pitcher. His curveball was really good. The good thing about Gavin is he stays down in the zone and he’s sneaky quick. I think he’s going to be a real good pitcher for Forbush.”

“Hunter knows how to pitch,” McKnight said of the rising freshman.

Notes: Mocksville outhit West 8-6. … There was only one error in the game. … Queen (2-3) was the only Mocksville player with multiple hits. Parker Simmons (1-3) and Daywalt (1-3) also had hits. Aaron Hutchens walked twice. … This nonconference game was Mocksville’s first action in seven days. … Mocksville avenged a 7-3 loss to West on June 19. … Mocksville is certainly accustomed to tight, tense finishes. This was the sixth consecutive game decided by one or two runs. Mocksville is 3-3 in that stretch. It is 5-3 in such games for the season.