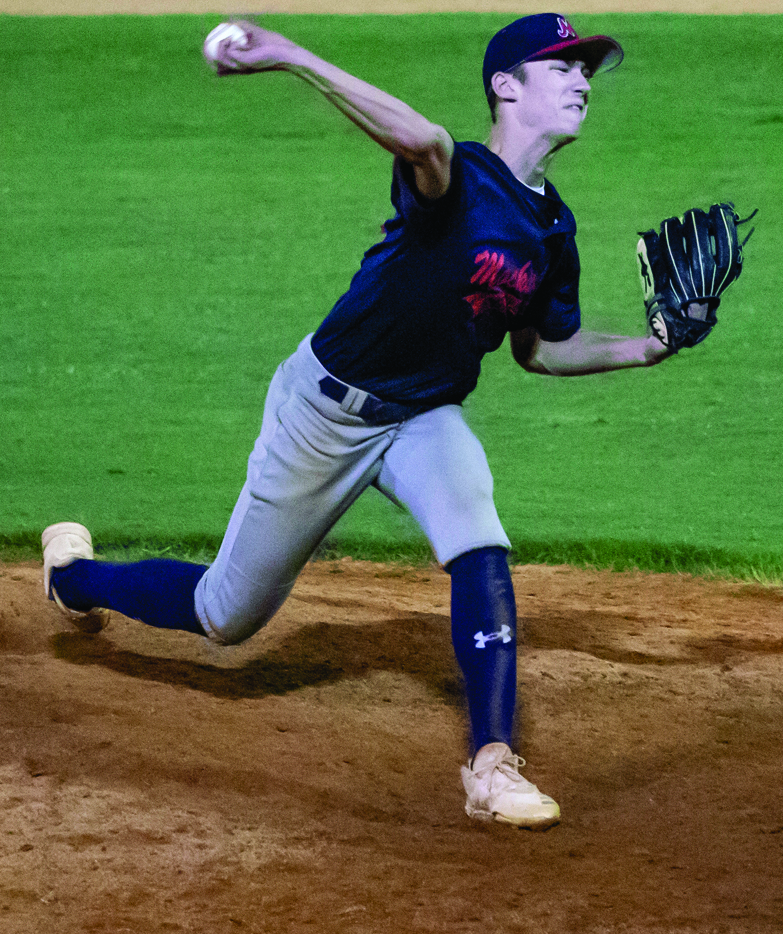 Jackson Sink was too much for visiting Kannapolis to handle, and the Mocksville Junior Legion baseball team capped a successful season with a thorough beating, 11-2, on July 13.

After playing six straight tight games, Mocksville unloaded on Kannapolis to go out with a three-game winning streak.

“A bunch of them are coming back next year,” he said. “Whoever takes the reigns or helps (Mike) Dinkins, they should have a good group to go to bat with.”

Mocksville burst to a 3-0 lead in the third. After Kason Stewart, Jacob Leonard and Gavin Maines all had walks, Colt Wright stroked a two-run single. Then Maines scored on a passed ball.

Starting pitcher Hunter Daywalt was in a terrific groove. He got Kannapolis 1-2-3 in the first. He faced the minimum in the second as Caleb Stewart erased a walk by starting a 6-4-3 double play. Daywalt struck out the first two batters in the third. But then a call at first went against Mocksville and Daywalt lost his rhythm. Two runs scored before McKnight turned to Sink, who induced a grounder to end the inning.

“For 2 and 2/3 innings, Hunter was lights out,” McKnight said. “I think he’s going to be a really good pitcher. To be as young as he is, he’s very poised. You don’t ever see a change in his demeanor. Even though that call really upset him, you really couldn’t tell it in his physical makeup.”

Sink was dominant in relief, throwing 27 of 39 pitches for strikes, facing 11 batters, or one over the minimum, across 3.1 scoreless innings and picking up the win.

“I could see him really being successful (at Davie),” McKnight said. “Jackson doesn’t have an ego. None of those guys do.”

Mocksville delivered haymakers in the fourth. With one out, Maines and Wright had first-pitch hits, with Wright doubling down the left-field line. After Carson Queen reached, Parker Simmons, Caleb Stewart and Sink smacked run-scoring hits as Mocksville surged to an insurmountable 8-2 lead.

Sink was a two-way star, and not for the first time, as he went 2 for 3 with three RBIs.

Wright’s moment of arrival was the game before this, a 3-2 comeback win over West Rowan. He had a clutch hit in the seventh inning to set up Queen’s walk-off hit. Wright built on it against Kannapolis, going 2-3 with two RBIs and a walk.

“Colt has been battling and we’ve been working with him,” McKnight said. “He blistered the ball. Colt finished strong.”

McKnight was finally able to relax during a game. Eight of 13 games were close margins, with Mocksville pulling out five of them.

“We got hits with runners in scoring position and things worked out,” he said. “It seemed like a lot of times we were hitting the ball right at somebody. Tonight we were fortunate to get some balls to drop.”

He raved about this tight-knit team.

“This was such a good group of guys,” he said. “They pulled for one another. These 14 guys were good natured. They never said a word all year about playing time. They were fun to be around. If you took one guy out and subbed another guy in, you never heard anything. It’s one of the funnest teams I’ve coached.”

Notes: Mocksville finished second in the conference behind Davidson County. “In a regular year, we go to the playoffs because we ended up in second place and generally they take the top two teams,” McKnight said. … All the team members were from Davie except Beshears (Elkin), Maines (Forbush) and Wright (North Iredell). … In McKnight’s first year as a coach, he had Joey Wright on his team. His last team had Joey’s son, Colt. “I coached a summer league team with my dad when I was 18 years old, and Colt’s dad was on that (Mooresville) team,” he said. “We played at Mt. Ulla Elementary School. I hadn’t seen Joey in probably 35 or 40 years. At the beginning of the season, Joey comes up to me. He didn’t realize who I was and I didn’t recognize him.”